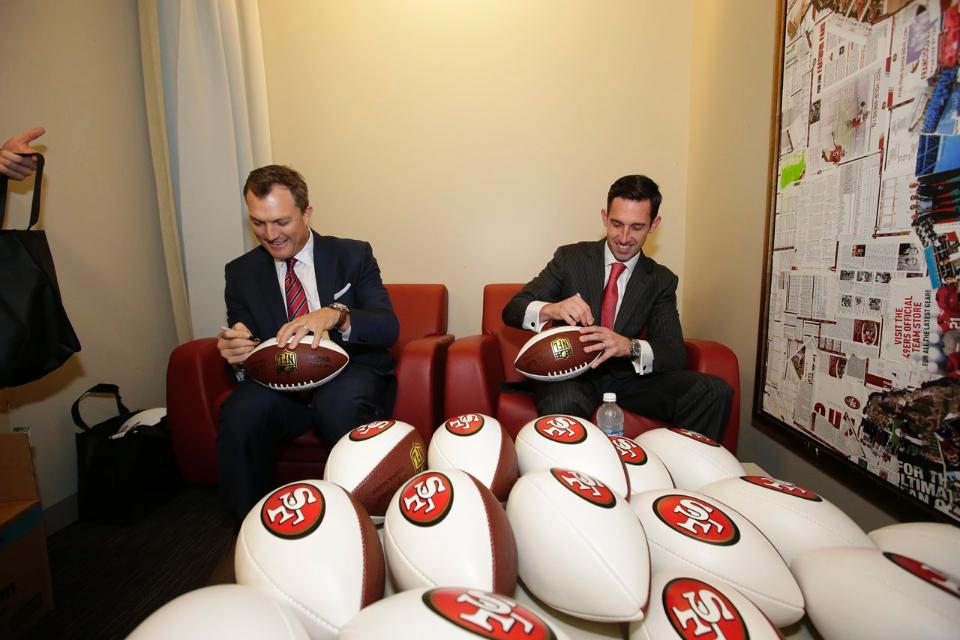 
A lot has changed since the first mock draft of the year, including clarity on the 14/15 pick after the Eagles won the coin flip against the Colts today for the 14th pick. Here are my predictions for the entire first round as the NFL Scouting Combine begins.

Things don’t change entering the Combine, and they shouldn’t. There has been talk about Cleveland taking UNC’s Mitch Trubisky, but that would be a huge surprise. Garrett fits perfectly at defensive end in Gregg Williams’ 4-3 defense.

There might be teams that “tank” for USC’s Sam Darnold, but this isn’t the NBA and John Lynch and Kyle Shanahan don’t seem like the type to not try to win every game. The Kirk Cousins rumors won’t die down until he signs a long-term extension, but if he isn’t traded to the Niners, they might get Trubisky as their guy and roll with a veteran starter in year-one of the new regime.

Lattimore projects as the top cornerback in a deep class, but the Bears do not pass up on the chance at an elite cornerback here. They already have some strong pieces in the front-seven, but Solomon Thomas or Jonathan Allen could be in play for John Fox’s team.

Tom Coughlin is looking to add tough, intelligent football players to the roster, and a star from Nick Saban’s defense seems like a good place to start.

The Titans already have their quarterback and a strong offensive line protecting him on the offensive side of the ball (not to mention a couple really good backs), so they just need to add talent to the defense to match them. Jamal Adams gives the team much-needed help in the secondary.

The first surprise of this mock draft, Williams could immediately fill the void that Brandon Marshall (who was just released) leaves behind. The Jets are in the process of tearing the whole roster down, so this pick gives them a #1 receiver for whoever they eventually find to play quarterback (Darnold?).

Hooker to the Chargers is the best fit possible for both him and the newest LA franchise. The Ohio State star would add to a young and emerging defense with potential stars all over, including Joey Bosa, Casey Hayward, Jason Verrett, and Melvin Ingram. The Rams better do something to avoid losing their market.

Fournette ran a 4.51 40-yard dash today at the Combine. Could you imagine a couple 240-pound specimens in Fournette and Cam Newton (who ran a 4.59 40-yard dash) being on the same team for short-yardage situations?

A beast like Foster would fit right in with the tough AFC North. The potential of Foster and Geno Atkins on the same defense is a scary thought for the rest of the division.

I had Mike Williams going here in our first mock, but this could be an even better get for the team. New head coach Sean McDermott has a winning mentality, and no one knows about that better than Mr. Watson. Of course, Watson probably won’t be an option here if Tyrod Taylor stays in Buffalo.

The Saints have been in the news recently because teams are calling about Brandin Cooks, and New Orleans might move the speedy receiver for another high draft pick to help build the defense. In this spot, they should take the best player available in Solomon Thomas.

If the Browns decide to roll with Cody Kessler at quarterback, which I’m on-board with, finding him some more weapons is a good idea. His production (numbers-wise) in college didn’t match this lofty draft spot, but Howard projects as an elite player at the top of a stacked tight end class.

One of the biggest flaws in 2016 for the Cardinals was finding a cornerback opposite Patrick Peterson. Wilson would step right in to sure up the secondary, and the team could return to their 2015-form if health cooperates on both sides of the ball.

First of all, I would trade this pick straight up for Brandin Cooks if I was Howie Roseman. Cooks doesn’t turn 24 until September, and we already know he’s a great receiver in the league. Whatever money he gets from an extension is well worth it. With no trades projected, Philly gets another Michigan guy opposite former Wolverine Brandon Graham to improve their ability to get after the quarterback.

New GM Chris Ballard has plenty of needs to fill after Ryan Grigson missed on way too many draft picks during his reign. Williams is an outstanding pass rusher, which the team desperately needs, but protecting Andrew Luck should be a priority, too.

John Harbaugh admitted that he has an advantage by talking to his brother and Michigan head coach Jim Harbaugh about his players. With Peppers being one of them, John should get a good answer as to why he only had one career interception despite being labeled a playmaker.

DeSean Jackson is likely to fetch more money on the open market, so Washington could replace him with a younger version. Ross has great hands to go along with his top-end speed.

Like the Eagles and their first round pick, I would trade pick #18 for Brandin Cooks in a second if I were the Titans. If not, they could continue to bulk-up the secondary.

Dalvin Cook is still on the board if the Bucs are ready to move on from Doug Martin, but they could also use pass rushers on their young defense. Barnett was extremely productive at Tennessee.

Cam Robinson from Alabama is considered the top tackle prospect by most, but John Elway probably likes Ramczyk after he played in a pro-style system at Wisconsin and profiles as a better pass blocker. That would be especially true if Tony Romo was under center.

Cunningham would form a nice tandem with Kiko Alonso on an underrated Miami defense. TE David Njoku was the pick here in my first mock, but the Julius Thomas acquisition changes things.

This is a dream scenario for the Giants, as they get a top running back prospect towards the end of the first round. Eli’s successor could also be considered if they like Notre Dame’s DeShone Kizer enough to spend a high pick on him.

The Raiders need a cornerback like the Giants need a running back. Sidney Jones might be around at this point, but he would give the team a good “gambler” with lockdown potential as the franchise inches towards Vegas.

Duane Brown is getting up there in age and has a history of injuries, so Cam Robinson could be his replacement in the near future. In the meantime, he could start on the right side.

Tankersley has the size and length that Seattle covets in their defenders. He profiles similarly to Richard Sherman, and could allow the Legion of Boom to transition seamlessly into the post-Sherman era as he enters his age-29 season.

Spencer Ware has filled in nicely for Jamaal Charles over the past couple years, but Andy Reid could be looking for a new offensive centerpiece after Charles was released earlier this week. McCaffrey is a steal here in my opinion.

This is a big slip for Davis, and the Cowboys would immediately scoop him up to play alongside Dez Bryant if he’s available. Dallas will also be looking for pass rushers this April.

J.J.’s brother gives the Packers another versatile piece to pair with Clay Matthews. T.J.’s tenacity would add an edge to the Green Bay defense, which also needs corners in a deep class.

Pittsburgh’s pick remains the same in Mock 2.0. Big Ben’s retirement talks might force them to consider Kizer, who could learn how to win behind Roethlisberger after doing a lot of losing at ND.

Atlanta’s defense was flying in the Super Bowl before Tom Brady happened, and things could have been different if they had some more help at cornerback. Conley gives them that.

It’s unclear whether King fits better as a corner of safety, but it might not matter for Bill Belichick. The greatest coach of all-time just wants good football players, and that’s what King is.