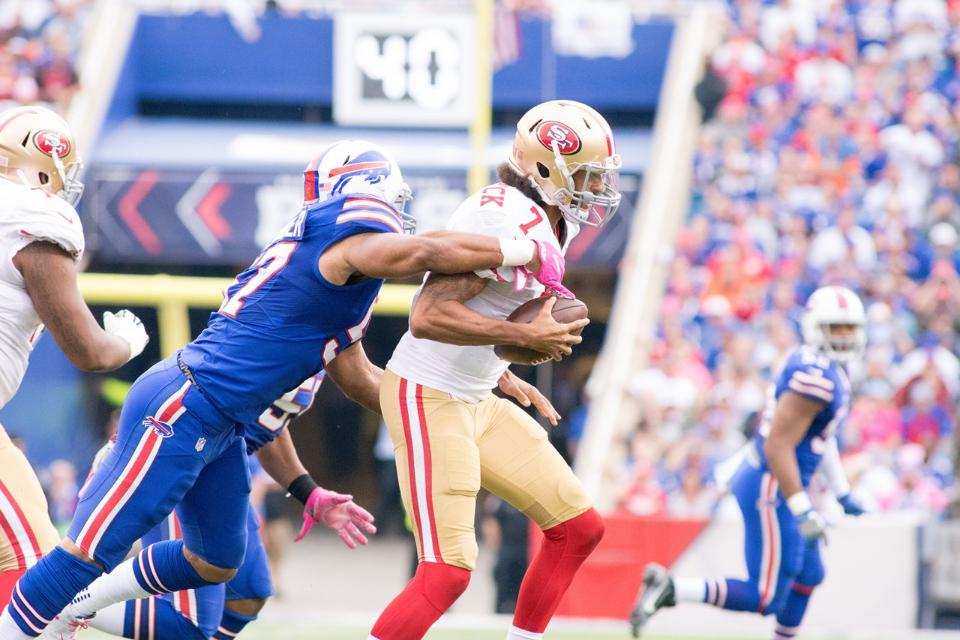 
NFL players with large salaries historically receive the most media and fan recognition for their performances, but the following ten players—all with a cap hit under $700,000—prove that success is not predicated upon a paycheck.

Avery Williamson finished the 2016 season as the undisputed leader of the Titans defense. In his third season, Williamson finished with 73 totals tackles, 104 combined, and two sacks. Williamson also had one fumble recovery, making him only the fourth Titan player out of 37 defensive players to recover a fumble. Williamson ranked 29th in tackles upon the close of the 2016 regular season.

Running back Robert Turbin has been a transient in the NFL during his five-year career, making stops with the Seattle Seahawks, Cleveland Browns, Dallas Cowboys, and finally landing with the Colts for the 2016 season. Turbin has never rushed for more than 354 yards in a season, making him somewhat dispensable. However, this season for the Colts he became much more valuable with seven touchdowns off only 164 rushing yards. Turbin also added 179 receiving yards and one receiving touchdown. He was tied for 26th overall in touchdowns in the 2016 season.

Jamison Crowder proved to be a huge bargain for the Washington Redskins based off his 2016 performance. Crowder tallied 847 yards, led the team with seven touchdowns, and had the second most receptions behind Pierre Garcon with 67. The Duke alum started nine of 16 games and Kirk Cousins targeted him 99 times.

In games against the Green Bay Packers, Detroit Lions, and Cincinnati Bengals, Crowder had over 100 receiving yards. The Week 10 win against Green Bay proved to be a perfect outing for Crowder. He finished with three receptions, 102 yards, one touchdown, and a perfect catch percentage (3/3 targets).

Telvin Smith led the Jacksonville Jaguars with 98 total tackles, 118 combined tackles, and one sack. Smith had seven games with eight or more tackles and his best game came in a Week 7 loss against Tennessee where he had 15 combined tackles.

Smith contributed in every game he played and for the first time in his career, started and played in all 16 games. At the close of the season, Smith was tied for 16th overall in tackles with Los Angeles Rams’ outside linebacker, Mark Barron.

In an otherwise abysmal 1-15 season, running back Isaiah Crowell proved to be one of the lone bright spots for the Cleveland Browns. The third-year running back out of Alabama State had the best season of his career, finishing with 952 rushing yards, seven touchdowns, and 319 receiving yards. Crowell also started all 16 games and had a career-high average of 59.5 yards per game. One of Crowell’s best games of the season came in a resounding victory against the San Diego Chargers. The Chargers gave up 54 rushing yards and two touchdowns to Crowell, resulting in their 20-17 defeat and the only win of the Browns’ season.

Tyrell Williams, a second-year receiver out of Western Oregon University, stepped into the role of leading wide receiver after an injury to Keenan Allen. In 2016, Williams had three games with over 100 receiving yards. In a Week 5 loss against the Oakland Raiders, Williams finished with 117 yards and one touchdown on five receptions. One of Williams’ best game was in the Week 7 overtime victory against the Atlanta Falcons, 33-30. Williams finished with seven receptions for 140 yards.

After the retirement of Arian Foster, Jay Ajayi stepped into the role of top running back for the Dolphins and never looked back. Ajayi’s best stats came from the Dolphin’s Week 5 win against the Pittsburgh Steelers, 30-15. Ajayi rushed for 204 yards and two touchdowns, making him the first NFL running back to reach 200 yards in the 2016 season. Against the Steelers, Ajayi averaged a season-high 8.2 yards per carry.

The following week Ajayi rushed for 214 yards, making him only the fourth player in NFL history to rush for 200 yards in two consecutive games. Ajayi finished the season the fourth-ranked running back in the NFL with 1,272 rushing yards to go along with eight touchdowns, and 4.9 yards per carry.

Thirty-three year old NFL veteran Lorenzo Alexander’s 2016 season is the best in his 10 year career. In his first year in Buffalo, Alexander led the team with 12.5 sacks. This placed him third in the NFL, only behind Von Miller and Vic Beasley Jr. For the first time in his career, he exceeded 2.5 sacks in a single season. The former primary special-teamer also finished with 56 total tackles.

Prescott led the Cowboys to an impressive 13-3 regular season record with his 3,667 passing yard and 23 touchdowns. The rookie from Mississippi State University finished the regular seasons with an 104.9 quarterback rating, behind only Tom Brady and Matt Ryan. His quarterback rating bested the passing leader Drew Brees (5,208) and the touchdown leader Aaron Rodgers (40). Prescott’s 2016 performance led him to be selected to the Pro Bowl and earn First-Team All-Pro honors.