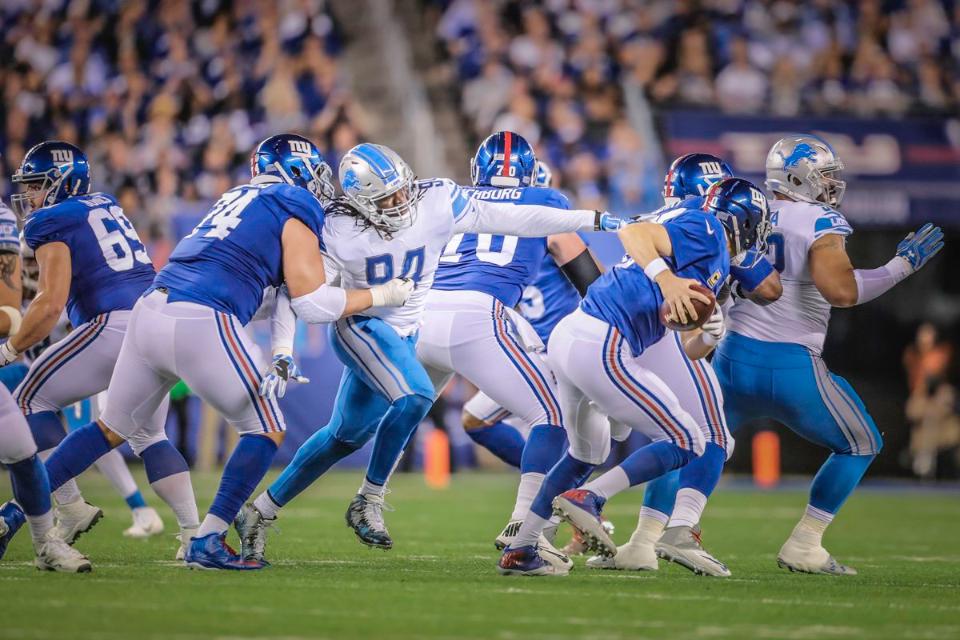 Offensive Line Issues Are Leading To Serious Issues For Some Teams


The Cincinnati Bengals may never score a touchdown again.

Want to see something truly depressing? Here are the results of every Bengals drive so far in the 2016 season:

That, friends, is offensive incompetence taken to a whole new level. Cincinnati has failed to gain even ten yards on twelve of their twenty-five possessions, turned the ball over six times (eight if you include turnovers on downs) and registered more punts (twelve) than points (nine). The generally competent Andy Dalton has posted an abysmal 2.39 ANY/A (adjusted net yards per attempt) and thrown half as many interceptions in two games as he did last season in sixteen. I could continue on like this for another several paragraphs, but I think the point has been made. Cincinnati’s offense isn’t just bad—it’s downright painful to watch. And they have no one to blame but themselves, for neglecting the most overlooked, yet arguably most essential, position on the depth chart.

There may be no position in football that gets less glory or attention than the offensive line. They are the NFL’s blue collar class, the steel workers and meat packers, the nondescript grunt workers who toil in the shadows to keep the machine running. We tend to pay attention to them only when they have done something wrong…and right now, in Cincinnati, they are doing pretty much everything wrong. The Bengals have let their offensive line rot over the past couple of years, waving goodbye to Andrew Whitworth and Kevin Zeitler in free agency and turning the tackle positions over to 2015 draft picks Cedric Ogbuehi and Jake Fisher. So far in 2017, the returns have not been pretty. This would be an issue for any team, but it’s especially problematic for a team quarterbacked by Andy Dalton, one of the worst signal callers in the league at handling the pass rush. Per Football Outsiders, Dalton has posted the second-worst DVOA (defense-adjusted value over average) under pressure of any quarterback in football since 2012, ahead of only Ryan Tannehill. For all their skill position talent—A.J. Green, Tyler Eifert, John Ross, et al.—the Bengals will be dead in the water if their young tackles don’t start progressing in leaps and bounds.

It’s hardly a shocking revelation that offensive line play is important—it doesn’t matter how good your quarterback is if he is lying on his back. What is surprising though, is how many otherwise well-constructed teams have repeatedly pushed their protection issues to the backburner, and repeatedly paid the price for their neglect. Cincinnati may be the most glaring example, but they are far from alone. Take the Seattle Seahawks, who just a few years back seemed to have all the pieces assembled to become the next great football dynasty. Seattle has gotten off to a dismal start on offense in 2017, scoring just 21 points (and a single touchdown) across their first two contests. This isn’t a new story for the Seahawks—since Wilson became the starter in 2012, he has been pressured on 33.9% of his dropbacks, by far the most of any quarterback in that time frame. And yet Seattle continues to show little interest in investing in pass protection for their beleaguered signal caller. The Seahawks traded away center Max Unger, arguably their best offensive lineman, to the Saints for JImmy Graham before the 2015 season, and last year they let left tackle Russell Okung walk in free agency, a questionable move that looked even worse when Okung ended up signing a comically team-friendly deal with the Broncos. The Seahawks owe some of their offensive line woes this year to the loss of presumptive left tackle George Fant to an ACL tear, but when George Fant is the most important player on your offensive line, you’ve already done something very wrong. Of the group Seattle trotted out in Week 1—Rees Odhiambo, Luke Joeckel, Justin Britt, Mark Glowinski and Germain Ifedi–only one player (Britt) was returning to the same position he had played for Seattle last year. Ifedi had never started a game at right tackle; Glowinski had just one previous start at right guard. Joeckel was acquired on the cheap and bumped over to guard from left tackle, where he was a colossal disappointment in Jacksonville after being drafted second overall back in 2013. This group was assembled from spare parts and other teams’ garbage, and it has showed through two games. This is what happens when you don’t make any sort of commitment to continuity on the offensive line—the Seahawks are left looking like the guy who ignores the Check Engine light on his dashboard for six months and then is shocked to find that has engine has seized up on the freeway.

And then there’s the New York Giants, another team with a deep, talented defense who have stumbled out of the gate in 2017 because their offense can’t seem to find the end zone. So far, most people have been quick to place the blame on Eli Manning—even their head coach, Ben McAdoo, has publicly called out Eli for his sloppy play through the first two weeks. But it’s hard to see how Manning can put the spark back in the dormant Giants offense when he’s being protected by Ereck Flowers and Bobby Hart, whose efforts to keep the pass rush out of Eli’s face have been about as effective as carrying water in a colander. Manning has been sacked on 10.3% of his dropbacks, and the Giants O-line hasn’t been much better in the running game—lead back Paul Perkins hasn’t notched a single rush of over 4 yards. The Giants posted an 11-5 record last season and were expected to be even better after adding receiving weapons Brandon Marshall and Evan Engram in the offseason, but it’s quickly become clear that those acquisitions won’t matter if New York doesn’t solve their dire problems on the line of scrimmage. Like the Bengals and Seahawks, the Giants entered this season with playoff aspirations; after just two weeks, they are struggling to even keep their heads above water.

There are still fifteen weeks left in the season, and it’s still possible that one or even all of these teams will find the solution to their protection woes, whether that’s a shakeup of the offensive line configuration or just development from their inexperienced linemen. But the lesson here is clear for any team with championship hopes: protect your quarterback, or pay the price.