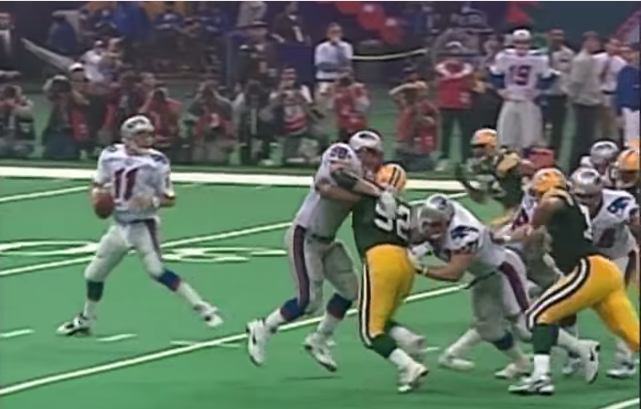 It’s an old and tired cliché, but the past few NFL seasons have certainly driven the point home. Two of the past four Super Bowls have featured the consensus best offense in football getting beaten to a bloody pulp by the league’s best defense. Rewind a little further, and you see the legendary 2007 Patriots offense stymied against the New York Giants’ pass rush. Scoring rates in the NFL are the highest they have ever been, but defense still reigns supreme on the game’s biggest stage.

So what are we to make of this year’s Super Bowl pairing? The Atlanta Falcons and New England Patriots are not built to pummel; they are built to take flight. These high-tempo, high-output offensive juggernauts have blown through the competition all season and left a trail of cowering defensive coordinators in their wake. New England’s 27.6 points per game was the third best mark in football; Atlanta’s 33.8 average outpaced the rest of the league by a country mile. It’s safe to say that this year’s edition of the Big Game won’t bear much resemblance to last season’s grindfest.

I mentioned that these two teams have the 1st and 3rd ranked scoring offenses in the league. Since the AFL-NFL merger in 1970, there have been seven Super Bowls played between two offenses ranked in the top three in scoring that season. So, as these two great offenses grease their gears and get ready for Sunday, let’s look back on how those explosive matchups played out. (Note: I am ignoring the four Super Bowls before the merger of the regular season schedule, because it doesn’t really make sense to compare the scoring rates of offenses that played in two different leagues).

The first such Super Bowl meeting, coincidentally, features two teams whose scoring rates align perfectly with this year’s contestants. The 1983 Washington offense was unprecedented for its time; League MVP Joe Theismann and star running back John Riggins helped Washington become the first football team in the post-merger era to average 30-plus points per game over a full season. However, they couldn’t keep up with Jim Plunkett and the LA Raiders. The silver & black used a fumble recovery in the endzone to jump out to an early lead and never looked back, while the vaunted Washington offense turned the ball over four times and only reached the end zone once  It was 28-9 in the third quarter when Super Bowl MVP Marcus Allen put the dagger into Washington with his iconic 74-yard touchdown run. For all the firepower on the field, only one offense showed up to this one.

Given how much the quarterbacking record books have changed over the past decade, it’s easy to forget that Dan Marino’s 1984 campaign was the gold standard for NFL passers for over two decades. In just his second season, Marino set single season records with 48 touchdown passes and 5084 yards on the way to what turned out to be his only Super Bowl appearance. The team he met in the Super Bowl was Bill Walsh’s 49ers, who need no introduction. Walsh and Joe Montana had already gotten one Super Bowl ring together, and Marino’s Dolphins offered little resistance on their road to another. The Dolphins took a 10-7 lead into the second quarter, but the Niners scored 21 points in the second quarter and Miami’s rocket-powered offense ground to a halt. Marino was sacked four times and picked off twice as San Francisco cruised to a one-sided victory.

Another potentially explosive matchup that got one-sided quickly. The “K-Gun” offense of the Buffalo Bills bore a lot of similarities to the uptempo spread offense that has been utilized by teams like New England and Indianapolis in recent years, but at the time the NFL had never really seen anything like it. Quarterback Jim Kelly commanded a top-3 scoring offense for three consecutive seasons but never cleared the final hurdle; the K-Gun misfired in four straight Super Bowl defeats. This one came at the hands of quarterback Mark Rypien and Washington’s high octane offense. We don’t really remember Rypien as a star, but he garnered a pair of Pro Bowl selections in 1989 and 1991 and was briefly considered one of the best signal callers in the game. He certainly looked better in this matchup; while Kelly suffered through a five-sack, four interception day, Rypien collected a Super Bowl MVP award with 292 passing yards and a pair of touchdowns. The final score actually undersells how one-sided this contest was—Washington scored the first 24 points of the game and led 37-10 before the Bills picked up a couple garbage-time touchdowns.

Those poor, poor Buffalo Bills. After consecutive Super Bowl collapses, Buffalo fans had to be hoping for some karmic balancing of the scales—instead, they somehow got an even worse ending. The 1992 Bills offense dropped off in production, but they were still the third-ranked scoring offense in a season when the league-wide scoring rate was the lowest it had been in 24 years. However, Jim Kelly’s offense fell flat in the Super Bowl once again, this time against Troy Aikman and the burgeoning Cowboys dynasty. While Aikman and the Great Wall of Dallas steamrolled the outclassed Bills defense, Buffalo’s offense belched up an astounding nine turnovers, including another four-pick Super Bowl performance from Kelly. The only bright spot for Buffalo was Don Beebe’s heroic 99-yard chase down-and-strip of Leon Lett; when your best memory of a game involves a 99-yard fumble return by the other team, it’s safe to say it just wasn’t your day.

Between the sexting scandal and the annual retirement soap opera that overshadowed his final few seasons, Brett Favre has become a little bit of a punch line these days. Back in 1996 though, Favre was unquestionably the most dangerous quarterback in the game. He was in the middle of winning three consecutive NFL MVP awards from 1995-1997, and the addition of Andre Rison to a receiving corps that already featured Antonio Freeman and Mark Chmura gave him the most talented array of weapons that he ever had in the receiving game. His opposite number in Super Bowl XXXI was Drew Bledsoe, who was one of the better quarterbacks in football throughout the 90s before suffering the sheared blood vessel that ended up inadvertently defining his career (and triggering the rise of Tom Brady). Bledsoe and Hall of Fame running back Curtis Martin fronted a potent New England offense in the mid-90s, but they couldn’t compete with Favre and the Packers. Favre had a monstrous first half, throwing a 54-yard touchdown to Andre Rison in the first quarter and adding a (then) Super Bowl record 81-yarder to Antonio Freeman at the beginning of the second. A New England touchdown in the third quarter made it 27-21, but game MVP Desmond Howard took the ensuing kickoff 99-yards for a touchdown and the Patriots never threatened again.

Finally, a close game! The high-flying Packers were back in 1997, this time against the Broncos. That Denver team is mostly famous for finally getting John Elway a Super Bowl ring, but the real star of their high-powered offense was third-year running back Terrell Davis, who racked up 1750 rushing yards in the regular season (one year later, he posted the fourth 2,000 yard rushing season in NFL history; the year after that, he blew out his knee and never played a full season again). Strangely, the most competitive game on this list was one that almost everybody thought would be a blow out—the Packers were 11.5 point favorites going into the game. To the surprise of the NFL world, Denver and Green Bay delivered the most exciting championship tilt in years (and a game that still stands as one of the best in Super Bowl history). Terrell Davis ran roughshod over the Packers’ defense, racking up 157 yards and a Super Bowl record three touchdowns, and John Elway’s “helicopter” dive to pick up a first down in the third quarter became one of the most iconic moments of his Hall of Fame career. Denver took a 17-7 lead early and never trailed, but the Packers battled back to tie the game twice in the second half before Terrell Davis’ third touchdown gave Denver the lead with 1:47 to play. Green Bay’s desperate final drive died on a failed fourth-down conversion, and the Broncos became just the second wild card team to take home the Lombardi Trophy.

I know, I’m as surprised as you are. The 2006 Bears are generally remembered as a defense-first team that won the NFC Championship in spite of their offense rather than because of it, but Chicago’s Rex Grossman-helmed offense actually matched Peyton Manning’s Colts point-for-point during the 2006 campaign. And while Grossman was never much more than mediocre, running back Thomas Jones produced a 1200-yard season for a Chicago team that locked up 13 wins and the number one seed in the NFC. Chicago even kept things interesting for a while on a rainy Super Bowl Sunday, as a kick return touchdown by Devin Hester helped them open up a 14-6 lead, but ultimately the Bears could not keep up once Peyton got into his groove. 2006 was not Manning’s finest season, and this was certainly not his best postseason showing, but Indy’s vast arsenal of weapons (including Marvin Harrison, Reggie Wayne, Brandon Stokely and Dallas Clark) proved too much for Chicago to handle, and Manning finally got the Super Bowl hardware to compliment his regular season achievements.

So what did we learn from this exercise? First of all, those of us expecting a shootout could be way off base. Four of those games were wire-to-wire blowouts, and only one of them (XXXII) was very close. Lots of great offenses have slashed and burned their way to the Super Bowl only to self-destruct when the chips were down. That’s not limited to the games on this list, either—-look at the 2007 Patriots, or the 2013 Broncos, or last year’s Carolina Panthers.

Does that mean that we’ll see a blowout on Sunday? Not necessarily. But there’s a common thread to all those awful performances by great offenses—turnovers. Every blowout victim on that list dug their own grave with a slew of costly giveaways.

I opened this discussion with the saying, “Defense wins championships.” And in a way, that’s more true than ever in this battle of titanic offenses. Tom Brady and Matt Ryan will dominate the headlines and probably fill the stat sheet, but I get the feeling that the outcome will hinge on one defense or the other forcing a big play to tip the scales. On Sunday, we’ll find out which defense that is.