Home / frontnfl / Players To Watch At The 2018 Senior Bowl 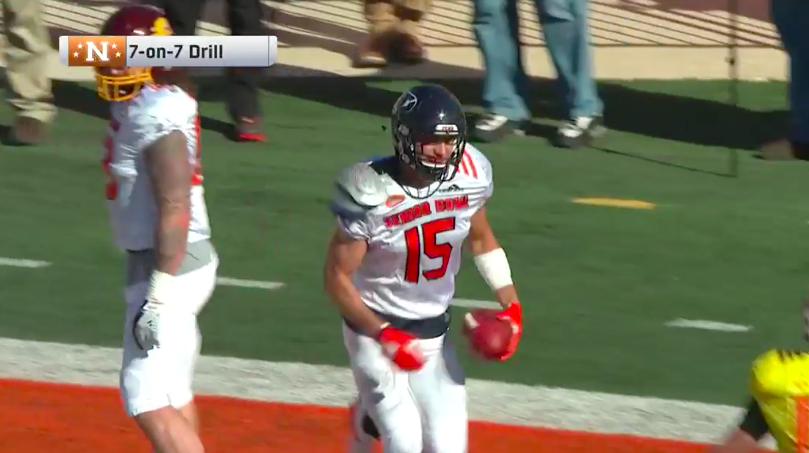 Players To Watch At The 2018 Senior Bowl


The 2018 Senior Bowl will be played tomorrow at 2:30 PM ET in Mobile, Alabama, and it can be watched live on NFL Network. There are dozens of players worth tuning in for, but these are the ones that I am really looking forward to seeing in action.

Quarterback-needy teams have been glued to North Team practices this week with Josh Allen and Baker Mayfield slinging it around, but Mayfield is unlikely to play in the Senior Bowl, so Allen will be the clear top prospect for the game. [UPDATE: Mayfield will play in the game, so he will obviously be a player to watch.] Twitter scouts/reporters have been quick to write him off based on a couple one-off clips, but Allen is the top quarterback in this year’s class for me, and he could solidify his spot with a strong showing surrounded by the best talent he’s ever been around.

My NFL comp for Gesicki earlier in the week was Jimmy Graham, and he showed again this week in practice that he can be a dominant force in the red zone. It will be fun to see what kind of looks the Penn State standout gets in game action, but I would be surprised if the general sports media—despite Gesicki playing at a premier program—isn’t caught up on him by next week when they construct their (mostly pointless) mock drafts.

Another offensive player from Penn State that has opened eyes is DaeSean Hamilton. The former Nittany Lions slot receiver has been showcasing his talent for two weeks after playing in the East-West Shrine Game last Saturday, and he’s quickly rising after a solid college career. Hamilton will look to get open against a good collection of South Team corners this week.

The North Team is heavy on offense and the South Team is heavy on defense, and that might be a good thing so scouts can see best on best. Will Hernandez will probably love the challenge against some SEC defensive linemen, and he should help anchor the front to move people in the running game and protect Josh Allen and Baker Mayfield in the passing game.

Okoronwko is one of two defensive players to watch on the North Team for me, and he has a chance to make a case as the best pass rusher at the Senior Bowl on Saturday. The Niegerian-born defender has great speed around the edge, and he could alleviate any size and/or strength concerns by consistently setting the edge against the run.

O’Neill is a great athlete for an offensive lineman, and while he isn’t being coached by Texans head coach Bill O’Brien and the South Team this week, the Houston Texans website listed him as the top player to watch on the North Team, for whatever that’s worth. It will be interesting to see if the left tackle’s athleticism can offset the speed of a couple standout pass rushers on the other side of the ball.

Stanford had a great draft in 2017 with Solomon Thomas and Christian McCaffrey both going in the top-eight picks, and now Harrison Phillips is their best prospect in this class after Bryce Love decided to stay in school. Phillips was able to show up when it mattered most in his senior season with 24 combined tackles in two games against USC, including a season-high 13 of them in the PAC-12 Championship, so he will look to make an impact with a bunch of NFL talent on the field at the Senior Bowl.

Samuels did it all for NC State, as he played running back, tight end, slot receiver, h-back, and even wildcat quarterback for the Wolfpack. He will spend most of his time as a running back on Saturday, and he should view that as a positive because he will get to display his talents as a pure runner in an NFL system. Plus, teams already know Samuels can be used as a variety of ways, so there isn’t much he has to prove in other roles.

Phil Savage, the Executive Director of the Senior Bowl, deserves a ton of credit each and every year for his ability to pick players to invite to the event, and Justin Watson looks to be the gem of this year’s group. The Ivy-leaguer made two of the best catches of the week in practice, and he will get a chance to make plays on Saturday to really catch the attention of NFL teams.

Ateman was able to put up big numbers this season (59 receptions for 1,156 yards and eight touchdowns), but he should face a lot tougher coverage on Saturday at the Senior Bowl than he did on Saturdays in the Big 12. I think he will be fine, though, as Ateman excels in contested-catch situations with his big-bodied frame and long arms.

Kickers are people, too, and Daniel Carlson will prove that based on what I expect to be a lofty selection in April’s draft. The prolific kicker out of the SEC hit a 57-yard field goal at practice on Thursday, and he will look to come through for the South squad with NFL scouts in attendance.

Davenport has been a favorite of former scout and current NFL Network analyst Daniel Jeremiah (and others) this month, as he was ranked in the top ten for his first prospect rankings of the year. However, even Jeremiah admitted that he’s been “routinely late off the ball” at practice this week when he puts his hand in the dirt. The small-school product still has some things to prove before he can be considered an early first-round pick in my opinion, but the Senior Bowl gives him a great opportunity against top competition.

If you don’t know, UCF’s best player during their magical, undefeated season was their versatile pass rusher Shaquem Griffin, and he has just one hand. He’s also “undersized” for the NFL and has yet to be invited to the NFL Combine, but I’m not betting against him. What Griffin doesn’t have in size, he makes up for with speed and heart, and he’s showed in practice this week that he can play off the line of scrimmage as a traditional linebacker or a safety. I still think he is at his best getting after the quarterback, and he will look to do just that on Saturday.

I didn’t even hear of Darius Leonard until this week, but the South Carolina State product was excellent in coverage at practice and will probably be the fastest linebacker on the field at the Senior Bowl. I’m not saying he’s Deion Jones, but it’s worth noting that Leonard is actually bigger than him; the small-school star will look to show he’s a playmaker against the North Team in game action.

The “CEO” of the Auburn defense has been solid this week at practice, and he will look to make a big play on Saturday to standout in a really good class of safety prospects. Matthews will probably see some time in coverage against Mike Gesicki, so it will be interesting to see how he holds up against the talented tight end.

Like Darius Leonard, small-school star Chandon Sullivan is a player I hadn’t heard of until this week, but he made a quick impression. Sullivan is very competitive in coverage and has shown the ability to locate and swat the ball away, so we’ll see if practice translates to the game.

You would think a former walk-on at Alabama that played his way to a starting spot on a National Championship team doesn’t have much to prove, but Levi Wallace playing in the Senior Bowl says a lot about him. He will be the top cornerback on the field in my opinion, and Wallace should have an edge after learning under Nick Saban, who specializes in coaching defensive backs.

While the North Team might have more offensive talent in general, it’s hard to get a better duo at wide receiver than James Washington and his college teammate Marcell Ateman. There were some concerns about Washington’s style at the next level, as he’s mostly a deep threat in a relatively compact frame, but he’s shown the ability to run shorter routes in practice this week. He could provide some fireworks for the South Team on Saturday.

Awarded the distinction as top offensive lineman at Senior Bowl practices, Isaiah Wynn excelled inside at guard after spending the majority of his career (the final two years) at left tackle, and his stock seems to be soaring this month. Quenton Nelson is the clear top offensive lineman in this year’s class, but Wynn could also turn into an elite player and an absolute bargain in the draft. I’m excited to see how he does against Harrison Phillips and the defensive line of the North Team.