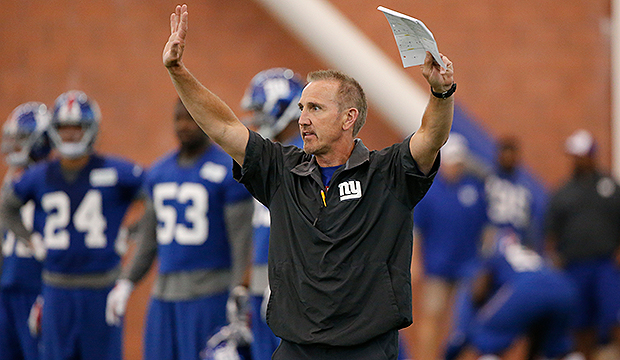 Potential Candidates For The Next Head Coach Of The Giants


The benching of Eli Manning last week was apparently the last straw for Giants owners John Mara and Steve Tisch, and the plug has been pulled head coach Ben McAdoo and GM Jerry Reese. It was really felt as though it was a matter of “when” and not “if,” but now that the firing is official, there’s suddenly an NFL head coaching job open. And while the state of the Giants roster is up for debate, with both head coaching and GM positions available, it’s probably an appealing job for many. Here are six of the coaches the Giants could be most likely to go after as they embark on a search.

He was passed over by McAdoo for the head coaching job a couple years ago, but Spagnuolo coached the team to a top-flight defense last season—and he earlier helped coach the team to a Super Bowl XLII victory over the Patriots. He’s a highly-respected coach around the NFL and might be atop the list for the Giants. Spagnuolo has four games as the interim head coach to get his team to play extremely hard and win some games for him.

While David Shaw might be considered more of a West Coast guy—he’s from there and played college football for Stanford—he might be interested in making the jump to the NFL for a franchise like the Giants. He’d likely have to be convinced and persuaded—maybe with full control of the roster—about leaving his alma mater.

Similarly, Harbaugh might not want to leave his alma mater until he wins a national title for the school—or at least a Big Ten championship. But if he is interested in leaving Michigan, it’d probably be for the right opportunity. The Giants might try to convince Harbaugh they’d give him all the time he needs to build a Super Bowl winner in New York.

The Giants could be looking for an offensive mind they thought they were getting when they hired Ben McAdoo, and Pat Shurmur might be that guy. He has head coaching experience, has coached different schemes (including Chip Kelly’s), and has aided Case Keenum to a superb year. Just turn on the Vikings and you’ll notice the play-calling for them is outstanding.

While relieving McAdoo of his duties bodes well for Eli Manning’s immediate standing with the team, the Giants will almost certainly have a top 3-5 pick in this spring’s draft—in prime position to get a good, young quarterback. Eagles quarterback coach John DeFilippo has clearly been a key member of Carson Wentz’s development in Philadelphia, as they blocked him from interviewing for the Jets’ offensive coordinator job during the offseason. Maybe the Giants will take a hint that their division rival doesn’t want to lose the guy and go after him.

Patriots offensive coordinator Josh McDaniels is also an option here, but maybe the Giants will want to go after a defensive coordinator after McAdoo didn’t work out. New England got off to a very slow start to the season defensively, but they turned it around and are playing like one of the best units in the league now. The man could be a rocket scientist if he wanted, so Patricia could probably help turn around a team that just made the playoffs in 2016.