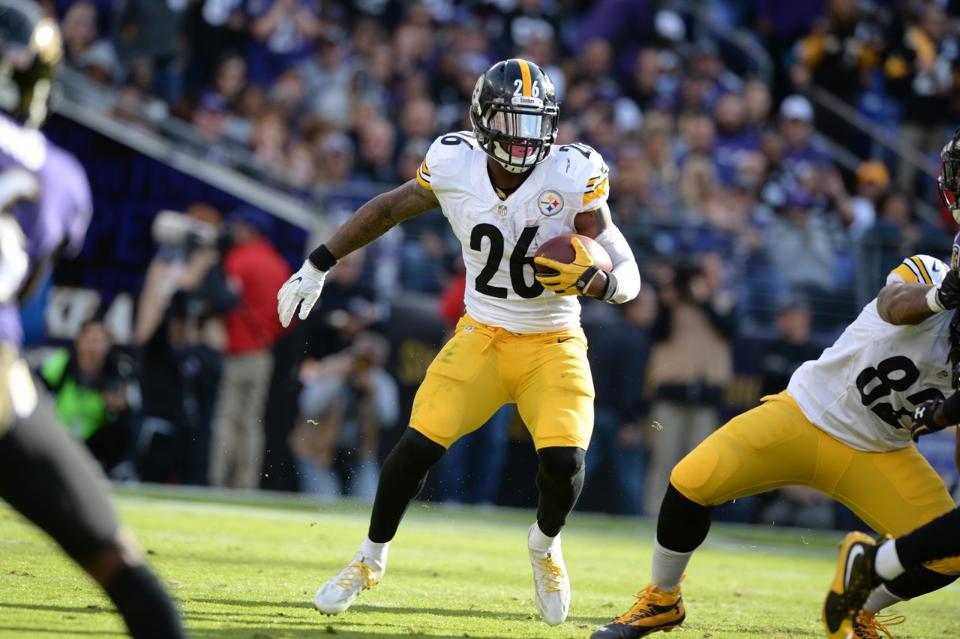 
All-Pro running back Le’Veon Bell and the Pittsburgh Steelers could not come to an agreement on a contract extension before yesterday’s deadline for players on the franchise tag to sign a long-term deal. Bell will now play 2017 under the $12.1 million franchise tag (which he has not yet signed, but will).

There’s still a season to play, with Bell and the Steelers as serious Super Bowl contenders, but the 25-year-old back could be an unrestricted free agent after the year. As one of the best players in the NFL, Bell would likely draw a lot of interest on the open market, and I think these teams would be among the most interested in signing the star running back if he doesn’t re-sign in Pittsburgh.

According to Over the Cap, the Colts will have over $60 million in cap space—more than enough to sign the running back. Currently in a trio that includes Ben Roethlisberger and Antonio Brown with the Steelers, joining Andrew Luck and T.Y. Hilton in Indy might be tempting for Bell. It would not be fun for defenses trying to limit that offense.

Over the last two offseasons, the Giants showed they are not afraid to spend big money in free agency. Second-year back Paul Perkins will attempt to seize control of the lead job for the Giants, and I really like rookie Wayne Gallman from Clemson, but New York might see Bell as someone they can insert right into the offense and make them a near-elite unit. Bell could also be someone that helps the Giants transition post-Eli Manning, assuming he retires over the next few seasons.

The 49ers are expected to have around $50 million in cap space in 2018, and their expected starter for 2017, Carlos Hyde, will be a free agent after the year. Kyle Shanahan and the Niners identified Utah running back Joe Williams as someone to target in the middle rounds of the draft, and the Shanahans have shown they can get it done with late-round backs; but they might be intrigued by bringing in Le’Veon. I really anticipate quarterback Kirk Cousins signing with San Fran next offseason, and he and Bell were teammates at Michigan State, so Cousins might recruit him to join.

For this to happen, I think the Browns would have to show a lot in 2017. But Isaiah Crowell will be an unrestricted free agent after the season, and the Browns have a lot of cap space to offer Bell a big contract. On paper, the Browns have one of the best offensive lines in the NFL and have invested a lot of money into it. They might want to invest more into a running back to run behind it. (Bell is also from Ohio.)

The Lions like both Ameer Abdullah and Theo Riddick, so they might not see a need for signing Bell. However, they are projected to have the most cap space in the NFL by far (although it will decrease if/when Matthew Stafford signs an extension) and will have room to sign Bell. The former Michigan State running back would also be close to his old college campus.

Baltimore Ravens: The Ravens have Danny Woodhead, Kenneth Dixon, and Terrance West, though West will be a free agent. The team likes Dixon, but if he underperforms when he returns from his suspension this year, they might take a run at Bell.

Philadelphia Eagles: Some serious cap navigation would have to occur for this to happen. But LeGarrette Blount is on a one-year deal, and Darren Sproles is expected to retire after the season. Bell would make things easier for Carson Wentz.

New England Patriots: I don’t see the Patriots committing the amount of money Bell wants to him, but it would not be a total shock to see New England do this. It’d harm one of their biggest competitors in the AFC.

Oakland Raiders: Marshawn Lynch has a two-year deal with the Raiders, but if he only plays one, the Raiders might bring in Bell and convince him to build something special with Derek Carr, Khalil Mack, and company.