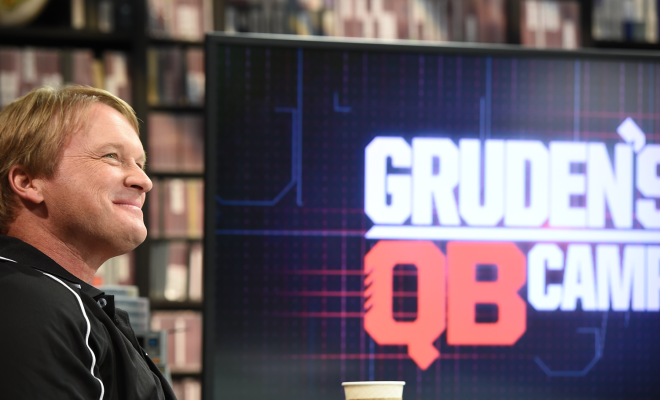 
Yesterday, Scott Reynolds of Pewter Report interviewed Super Bowl winning head coach and current Monday Night Football color analyst Jon Gruden. The extensive 40-minute interview is interesting and very much worth reading in its entirety. In it, Gruden makes it clear he would like to return to coaching in the NFL:

“I’ve met with several people – I won’t deny that,” Gruden said. “People – just about every year I talk about coming back to coach. I’m not in here every day at 4:30 or 4:00 in the morning watching pinball. You know? I’m preparing myself to come back. I am. Every day. I’m preparing to come back.”

Funny stuff from Gruden, who admits he’s grinding to get back into coaching, not “watching pinball.” Gruden also added that his work ethic helps him with his current broadcasting job with ESPN and helps keep that “edge.”

Because Gruden has been able to take a step back and look at the NFL and football landscape as a whole—while studying different teams, systems, and schemes—he is clearly more than prepared to lead an NFL team. Some in the media like to make it seem as if winning is easy, but it’s not. And Gruden has a ring on his finger. Of everyone available he’s up there with Chip Kelly for me as the person I would hire to be my head coach—they’re both football maniacs that live and breathe the game.

There are three other big takeaways from Pewter Report’s interview with Gruden. One, he wants full personnel control. Gruden did not like some of the decisions made by his GM Rich McKay, including drafting Chris Simms (who Gruden did not want) in the third round of the 2004 draft. “If I ever come back and coach I’m going to be involved a little bit differently in personnel,” Gruden said.

The second takeaway is I don’t see Gruden getting back into coaching until after the 2018 season. His youngest son, Jayson, is a junior in high school. Maybe the perfect situation for Gruden will be open after this season, but he’d probably like to wait until his son is done in 2018/2019.

Taking all that into account, here are a few of the teams I believe Jon Gruden could land with over the next few years:

This is assuming Gruden still likes what he sees from Carson Wentz over the next season or two. Before his first head coaching job with the Raiders, he was the offensive coordinator with the Eagles from 1995-1997, so the connection is there. Right now, there is a lot of optimism in Philadelphia about the Eagles. If things start to go bad, we’ve seen the fans will quickly turn on the team, though.

The issue with Jon Gruden to the Eagles is the presence of his brother, Jay, with the division rival Redskins. Maybe that won’t affect Jon Gruden’s decision, but it could be a factor if he does not want to coach in the same division as his brother. The other issue is the presence of Eagles executive vice president of football operations Howie Roseman. Current Eagles head coach Doug Pederson, unwittingly, said the Eagles roster probably has more talent than the great ‘90s Packers teams. It wouldn’t be a problem for Pederson to be confident in his team (and he also acknowledged things need to come together and talent isn’t everything), but he’s setting himself up to take all the blame and get fired while Roseman keeps his job if the season goes bad.

For whatever reason, Howie Roseman has had the ear of Eagles owner Jeffrey Lurie through the years, getting several personnel guys (and head coach Chip Kelly) fired all while remaining in a powerful position. I do not see any way Gruden goes to the Eagles as long as Roseman is there. Things can change though, and maybe Lurie will finally give Roseman the boot if the Eagles don’t perform—which would open it up for Gruden to take full control of the team as the head coach.

Obviously, Bill O’Brien is a very good coach, but things reportedly haven’t been the greatest between him and GM Rick Smith. I think the future is bright for the Texans and they should do what is necessary to keep O’Brien as the head coach, but stranger things have happened.

Coincidentally, the current Texans head coach has two years left on his deal, so maybe if they decide to just part ways at the end of that, the Texans will go for Gruden. I believe Deshaun Watson was the best player in this year’s draft, so I think he’ll be a great NFL quarterback and someone Gruden will want to coach in a couple years. Of course, GM Rick Smith, whose contract runs through 2020, would need to be shown the door to give the former Bucs coach full control.

Again, Ron Rivera is a very good coach, but this is just speculation—I’m not saying Rivera, or any of these guys, should be fired. If for whatever reason the Panthers don’t get back to the playoffs in the next year or two, it could be the end of the current Panthers head coach in Carolina. Some were calling (stupidly) for the firing of Rivera during the team’s decline last season after their Super Bowl 50 appearance.

Cam Newton is someone that has enticed Gruden in the past because of his great physical gifts. If Gruden believes he can help mold Newton into a more efficient passer, he’d probably love to have the opportunity to work with him. Newton would be 30 if he isn’t hired until 2018/2019, but Gruden would be a great coach to help Newton in the second half of his career if his athletic ability starts to decline.

This might come as a surprise, but the Browns are building a solid roster in Cleveland. The offensive line is one of the strongest in the NFL on paper, and they’ve certainly added talent in the last two years, including Myles Garrett, Jabrill Peppers, and David Njoku in the first round of this year’s draft. If the team doesn’t see results on the field, maybe owner Jimmy Haslam will decide he’s had enough of losing and want to go in a new direction. We’ve seen Haslam isn’t afraid to make changes and go after big-name coaches.

I think second-year quarterback Cody Kessler is good, but if the team isn’t good over the next two seasons they could have a top pick in the draft again. USC star quarterback Sam Darnold reportedly might remain in school past this season; so maybe if the Browns get the first overall pick in 2019, Gruden will be interested in seeing what he can do with Darnold and the Browns. While Cleveland might not be all that appealing to Gruden, he might be interested in getting a historic franchise back to a championship level.

As stated, Gruden is going to want control of personnel if he returns. He’s said it in the past and he said it in the interview with Pewter Report. Chris Ballard was just hired this year as the General Manager of the Colts, but owner Jim Irsay isn’t someone that’s opposed to making a switch. Gruden reportedly turned down Irsay this offseason; but even if that is true, it could be because Gruden’s son is still in high school and he wants to wait until he graduates.

If he wants, Irsay would be able to offer full control and the ability to coach Andrew Luck. Maybe Gruden wouldn’t trust Irsay, probably the NFL’s most controversial owner, enough to work for him as his head coach, but the idea of working with Andrew Luck and having full control of the team might make him at least think about it.

Of the teams on this list, it’s probably safe to say the Jets have the worst roster. However, they could have the number one pick in the draft in any of the next few years, which could interest Gruden if he likes a quarterback (such as Darnold). Because they are in a bad situation right now, it wouldn’t be surprising to see the team give full control to Gruden while promising him time to turn the franchise around.

Having a clean slate and building the roster how he wants is a challenge Gruden might be interested in. He said on draft night how much he loves the team’s first round pick Jamal Adams, who he thought was the best player in the draft. With Adams as the leader on the defensive side of the ball, Gruden might want to go the Jets, grab his quarterback to lead the offense, and try to build a Super Bowl caliber team.