Home / frontnfl / Potential “Surprise” Picks For The Raiders At No. 4 In The 2019 NFL Draft 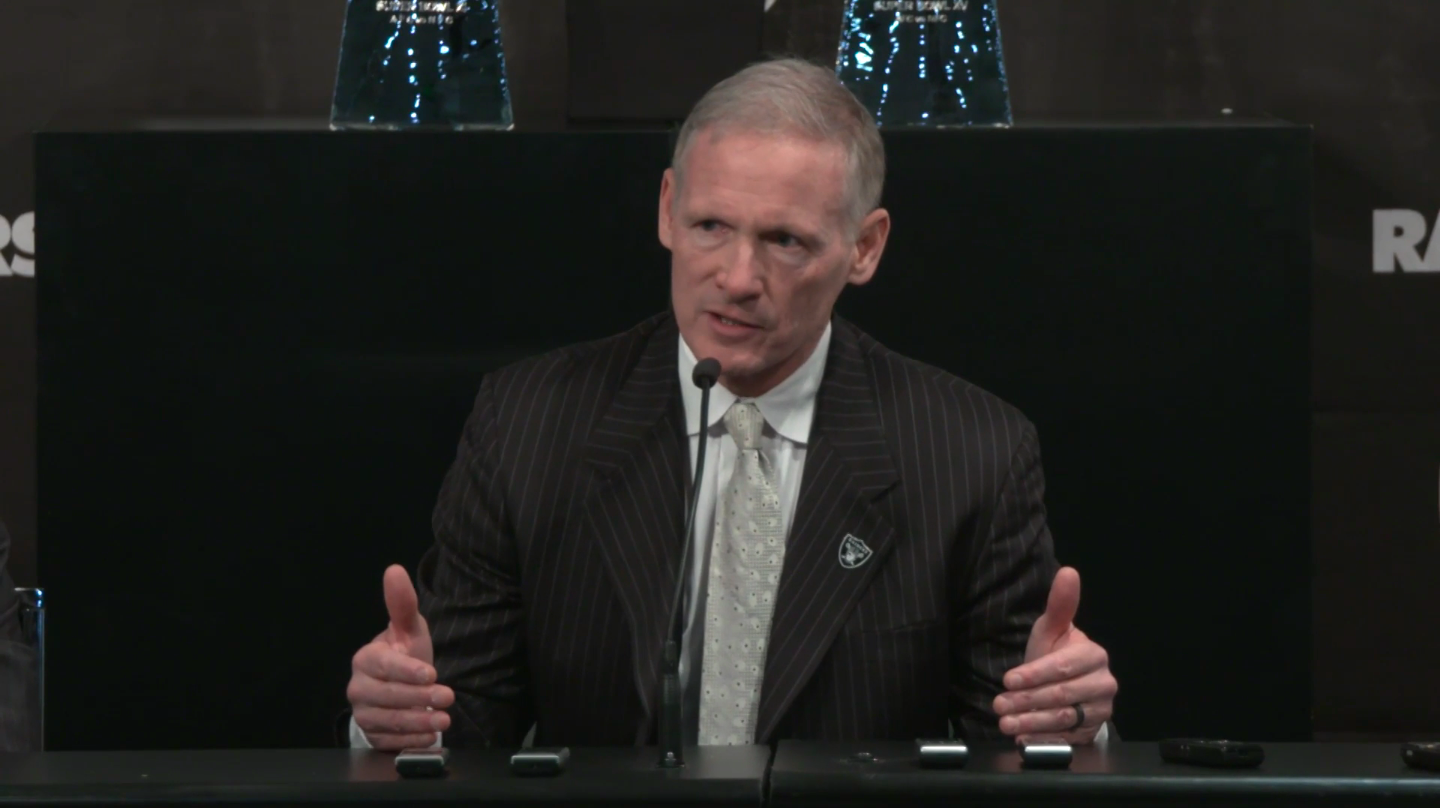 Potential “Surprise” Picks For The Raiders At No. 4 In The 2019 NFL Draft


Yesterday, NFL Network’s Ian Rapoport floated a report that the Raiders might have sent away all their scouts because they have a “surprise” pick coming at No. 4 overall in the draft. This could be fake news, a smoke screen, or just a guess by Rapoport, but which players would constitute a surprise for the Raiders? Kyler Murray is expected to No. 1 to Arizona, then Nick Bosa, Quinnen Williams, and Josh Allen are widely seen as the top three defensive players in the draft, so perhaps anyone but them would be a surprise. These are the eight most realistic-but-unexpected possibilities, ranked from least stunning to most stunning.

Rapoport mentioned Devin White as a possibility, and the only reason it’d be surprising is that most mocks have him going to Tampa Bay (fifth overall) at the earliest, and off-ball linebackers typically aren’t drafted high. But Raiders GM Mike Mayock had Georgia linebacker Roquan Smith ranked No. 4 on his prospect rankings last year, and White and Smith are similar players as athletic, playmaking players in the middle of a defense. White was highly-productive with the most tackles in the SEC the last two seasons, and he’s the type of player that you’d think Jon Gruden and Mayock would love to have on their roster. White might very well be the pick—and a good one—even if some aren’t expecting it.

Ed Oliver is the second-most realistic possibility as a “surprise” selection by the Raiders in the top five, but the Houston defensive tackle was considered the favorite to be the No. 1 pick in the draft several months ago by some people. Oliver is undersized, but he can wreak havoc in enemy backfields, especially if he gets single-teamed; and Mayock spoke earlier this offseason about the importance of getting pressure via pushing the pocket up the middle in the face of the quarterback. There’s also sudden noise about the Jets, who pick No. 3, being interested in Oliver, so maybe that could be a smokescreen in an attempt to get Oakland to trade up a spot if there’s thought around the league is that’s the player they want.

Vernon Davis (2006) and Kellen Winslow Jr. (2004) were drafted sixth overall in their respective drafts, but there hasn’t been a tight end selected in the top five since Riley Odoms in 1972, so Iowa tight end T.J. Hockenson’s position alone would make him an out-of-nowhere pick at No. 4 overall. Mayock wants to go best player available, and it’s difficult to see that being Hockenson in this stacked draft class, but the Raiders do have a big need at tight end; maybe they feel Hockenson has an all-around skill set to constitute a high draft pick. Another thing to keep in mind is that NFL Network draft analyst Daniel Jermiah moved Hockenson up to the No. 4 spot (where the Raiders pick) on his final big board—maybe he has some insight on what his former colleague might be thinking.

The AFC West is an extremely athletic division, particularly on the offensive side of the ball in Kansas City and Los Angeles. To help combat that, a guy like Florida State edge player Brian Burns could be a perfect fit as a versatile chess piece for Oakland’s defense. Burns has drawn some comparisons to Von Miller, and there’s virtually no chance he’s available by the time the Raiders pick again at No. 24 and No. 27—while a trade up would probably be too costly given that Burns is likely to be a top 10-15 pick. If the Raiders want Burns, they might have to take him at No. 4.

At the Scouting Combine, Gruden said that D.K. Metcalf looks like Jim Brown and rhetorically asked who’s tackling that guy on the perimeter. There’s certainly a chance Metcalf is there with one of the Raiders’ two other first-round draft picks, but Gruden and Mayock might feel there’s so much raw talent to work with that he’d be worth a top-five selection. Metcalf would be an old-school type of Raider, and the team has talked about wanting to have the best receiver room in football—having Metcalf as the No. 3 receiver, without much pressure on him to produce immediately, would have both short- and long-term upside.

Georgia shutdown cornerback Deandre Baker is the type of player at the position it seems Mayock would be high on. While playing in the SEC, Baker didn’t allow a touchdown his last two seasons in college, and he’s an all-around player that will get in there and involved in the run game to make tackles despite being relatively undersized. NFL teams should almost certainly be higher on Baker than most of the media is, and No. 4 would not be too high if the Raiders feel he can be a true lockdown corner.

Based on skill and ranking as a prospect, this wouldn’t be a huge surprise; Mississippi State pass rusher Montez Sweat is seen as one of the highest-upside players in the draft, and he’d be a perfect fit as a defensive end in Paul Gunther’s 4-3 defense. However, Sweat’s heart condition reportedly caused some teams to take the prospect off their draft board completely, which would make his selection in the top-five a bit more surprising.

The pre-draft process, including an injury during on-field drills at the combine, didn’t appear to go well for LSU cornerback Greedy Williams, but he was previously seen as a potential top-five-to-ten pick. Mayock trusts the tape above all else, so if he is high enough on what Williams put on film—along with his top-notch measurables and speed—this could be an early shocker.