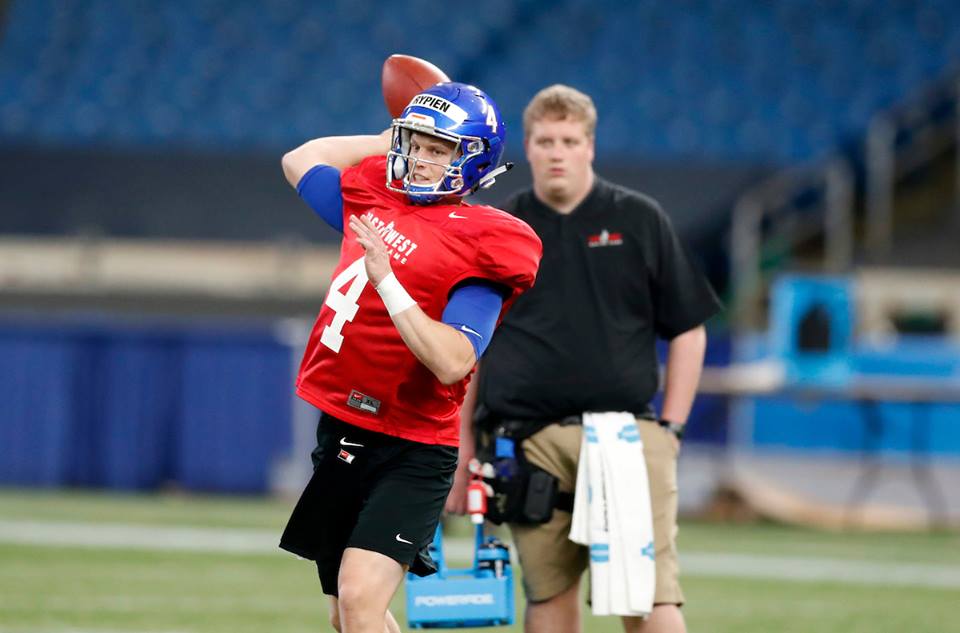 Prospects To Watch At The 2019 East-West Shrine Game


Some of this year’s NFL Draft prospects will get a chance to impress tomorrow at the 94th East-West Shrine Game (3 PM ET on NFL Network), so who in particular should football fans keep their eyes on for each squad? [Note: jersey number is listed in parenthesis]

Ole Miss had a disappointing 5-7 record in Jordan Ta’amu’s first season as the full-time starter, but he still had nine games with at least 324 passing yards, and his mobility could help draw late-round interest. It’s worth noting that Ta’amu struggled against big-time SEC opponents despite having three future NFL wideouts at his disposal, but quarterback-needy teams have reportedly been impressed based on what they’ve seen in practice this week.

Despite coming off a senior season in which he caught just 23 passes (his lowest in four years), Terry Godwin is a smooth, do-it-all receiver that is probably being undervalued simply because he never took the statistical leap that was expected last season. Godwin can rebuild his value in a deep receivers class by putting on a show this weekend.

One of the three aforementioned future NFL receivers that Jordan Ta’amu had at Ole Miss, DaMarkus Lodge is the lesser known of he, A.J. Brown, and D.K. Metcalf. However, Lodge is great at working on the perimeter and coming back to the football at six-foot-two, and we’ll get to see him connect with his college quarterback for the East team.

A former five-star recruit, Martez Ivey is one of the top prospects playing in the East-West Shrine Game, but he has apparently struggled at practice after a sub-par 2018 season, and I’m not sure about the fit at offensive tackle. Maybe it’s actually a good sign that the coaches believe he has the talent to stay outside, though, and a change could always come next month ahead of the NFL Combine.

Kyle Lawrence Phillips is a bit of a tweener, but I think his best fit in the league is as a defensive end in a 4-3 scheme that can kick inside at times, which is exactly what he did at Tennessee. Phillips might also be able to bulk up to consistently play on the interior, but either way, he will likely have to make his bones as an effort player.

With 419 total tackles over the past three seasons, Khalil Hodge was always around the ball as Buffalo’s middle linebacker, ranking second (2017) and fifth (2018) among the NCAA tackle leaders over the past two years. Hodge always has his eyes on the ball, but showing a little more fluidity in coverage would be key this week.

A versatile defender that played on the defensive line and at linebacker for BYU, Sione Takitaki has the skillset to turn into an ace special teams player in the league, but that doesn’t mean he can’t also make an impact on defense. And while he might not have the same upside, Takitaki is similar to former teammate Fred Warner, who was a third-round pick of the 49ers last year.

I think Lukas Denis is probably the best defensive prospect in we’ll see on Saturday, and he will look to showcase his upside as a playmaking safety after totaling nine interceptions for a whopping 27.1 yards per return over the past three years at Boston College. Lukas can play centerfield or come down to cover the slot.

We won’t get a chance to see some of 2019’s top-tier quarterback prospects until the Senior Bowl, but Brett Rypien is currently my highest-ranked player at the position out of the six signal-callers in this game. The nephew of former Super Bowl MVP Mark Rypien, Brett has a prime opportunity to increase his stock with live reps after throwing for 90 touchdowns and just 29 interceptions at Boise State.

Unfortunately, former Pitt standout Qadree Ollison (ankle) won’t suit up as a powerful back for the West squad, but that opens the door for Devine Ozigbo—coming off a 1,000-yard season in which he averaged 7.0 yards per carry with 12 touchdowns—to continue rising after a breakout senior season. The athletic testing will be important for Ozigbo, but he will be fun to watch as an old-school runner that caught 23 passes last year.

The East Roster has the headlining talent at receiver, but Fresno State’s KeeSean Johnson (no relation to former No. 1 overall pick Keyshawn Johnson) has a chance to put on a show as the top target for the West. Johnson had a 95/1,340/8 line as a senior, and similar to Ta’amu and Lodge, his connection with college quarterback Marcus McMaryion should help in this showcase game.

A Big Ten offensive lineman is certainly worth watching, and Juwann Bushell-Beatty will look to build on his all-conference team honorable mention as a fifth-year senior. The New Jersey native started at right tackle for the Wolverines, but he’s already listed as a guard to begin the pre-draft process, which is a better fit for the next level.

Big defensive tackle Daylon Mack spent his first three years at College Station as a top reserve for the Texas A&M defensive line, but he finally became a starter to close out his career with 5.5 sacks and 9.5 tackles for loss in 2018. At six-foot-one, 320 pounds, Mack has a quick first step and underrated overall athleticism that should have the NFL intrigued in a deep class.

Utah will be represented in the East-West Shrine Game by a couple Barton’s, as Cody will be joined by his brother and offensive tackle Jackson. The linebacker Barton was a defensive leader for a tough Utah team in 2018, and he should excel as a tackler, cover man, and blitzer this weekend.

The culture established by head coach Pat Fitzgerald at Northwestern should have his guys ready to make the professional leap, and Montre Hartage will be up for the challenge of defending Terry Godwin II and DaMarkus Lodge for the East squad. Hartage had five interceptions in 2016 and can stick to receivers in man-to-man coverage.

Safety is another position that looks stacked this year, but Adarius Pickett shouldn’t be overlooked as a consistent presence that seemed to always be around the football in 2018. Pickett racked up 123 total tackles for the Bruins last season, and he can increase his draft stock by showing well in coverage throughout the pre-draft process.