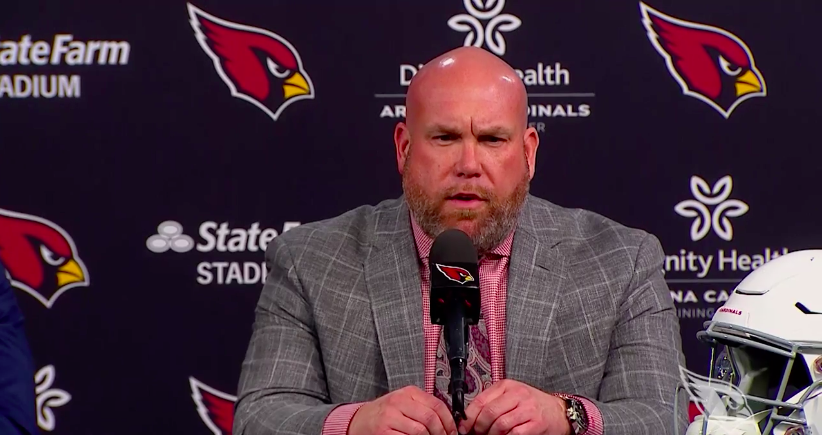 Ranking The Potential NFL GM Vacancies That Could Emerge In 2020


The Jets are in the process of hiring their next general manager, but what about the potential opportunities to run a team in 2020? Here are ten possible openings in order from worst to best (so, the least attractive to the most attractive) for the big job next offseason. And to be clear, I am not saying any of these decision-makers should be fired, but multiple GMs almost certainly will be.

The Cardinals simply won’t move on from the Kliff Kingsbury/Kyler Murray pairing after one season, so if Steve Keim is fired, the new general manager wouldn’t have a say when it comes to his head coach or quarterback. I doubt many prospective candidates would want to hitch their career to a wagon they didn’t buy.

This year’s No. 5 overall pick Devin White looks very promising, but overall, the Buccaneers have missed on too many draft picks over the past few years, which takes away from the hits like O.J. Howard and Chris Godwin. A new GM would have a lot of work to do in rebuilding the roster foundation to support the pieces already in place, and who knows if ownership and/or Bruce Arians would insist on keeping Jameis Winston.

The biggest draws for San Francisco are quarterback and defensive line, but CEO Jed York brings this job down a couple notches; while head coach Kyle Shanahan and general manager John Lynch did well to secure six-year deals in 2017, their job status could be a bit volatile due to the owner’s impatience. The Niners might not return to their former glory unless something changes at the very top of the organization.

If the Jacksonville job opens in 2020, it likely means Nick Foles didn’t work out, and the troublemakers (mostly Jalen Ramsey and Leonard Fournette) remained problems. That said, the roster has two franchise offensive tackles in place, and I would assume Ramsey can fetch quite a return in a trade—allowing the team to build around Josh Allen and Myles Jack. Plus, new management would have a chance to add receivers that fit Foles’ game better (i.e. jump-ball winners that play above the rim).

Team owner Martha Firestone Ford will turn 94 in September, so if she doesn’t feel 100% convinced that Bob Quinn and Matt Patricia are the right men to lead the franchise, she might not hesitate to make sweeping changes. Despite playing in a tough division, a new regime in Detroit could be in a similar position to the Eagles a couple years ago (where Chip Kelly laid the groundwork for a championship team) based on Patricia toughening his guys up.

It was a half-joking comment, but Jay Gruden already said he won’t be in Washington if they fail to make the playoffs in 2019, and that could mean team president Bruce Allen is potentially on the way out, too. The next general manager would almost certainly have full autonomy of the roster (and hiring of a head coach), so the Redskins would be an attractive job to either build around Dwayne Haskins or—like we’ve seen with the Cardinals—another quarterback.

Marcus Mariota is still just 25, and I think Tennessee would be wise to extend him on a team-friendly, long-term deal while the rest of the league is forced to sign their quarterbacks to record-breaking contracts. That means new management would already have their quarterback, running back (Derrick Henry, assuming he gets a deserved extension), and receivers (A.J. Brown, Corey Davis, and Adam Humphries) in place for the next three-to-five years.

I don’t think John Elway should be fired (Denver won a Super Bowl in February of 2016, for crying out loud), but the ownership situation needs to be sorted out, which could lead to the franchise completely cleaning house—from Elway to the board of trustees to the scouting staff. That would mean whoever potentially takes over would have not only a clean slate to build a championship contender, but also the loyalty/trust of the whoever the new controlling owner is (because he or she would likely want to create stability).

A legitimate case could be made for Saquon Barkley being the best overall player in the NFL, so who wouldn’t want to construct a roster around him besides the people who insist it was dumb to draft him second overall? And even for those not completely sold on Daniel Jones at quarterback, the defensive pieces (Dexter Lawrence, B.J. Hill, Lorenzo Carter, Deandre Baker, Julian Love, Jabrill Peppers) should excite executives potentially eyeing the job.

The Minnesota roster is ready to win a Super Bowl and arguably has been for the past three or four years, but Kirk Cousins needs to consistently play better in big games for them to make a deep run in 2019. If that doesn’t happen and the franchise decides to make changes, new management might be able to get a first-round pick for Cousins (who would count just $1 million against the cap if traded next offseason) to see if a rookie like Jake Fromm, Tua Tagovailoa, or Justin Herbert would have better luck with the championship core currently in place.