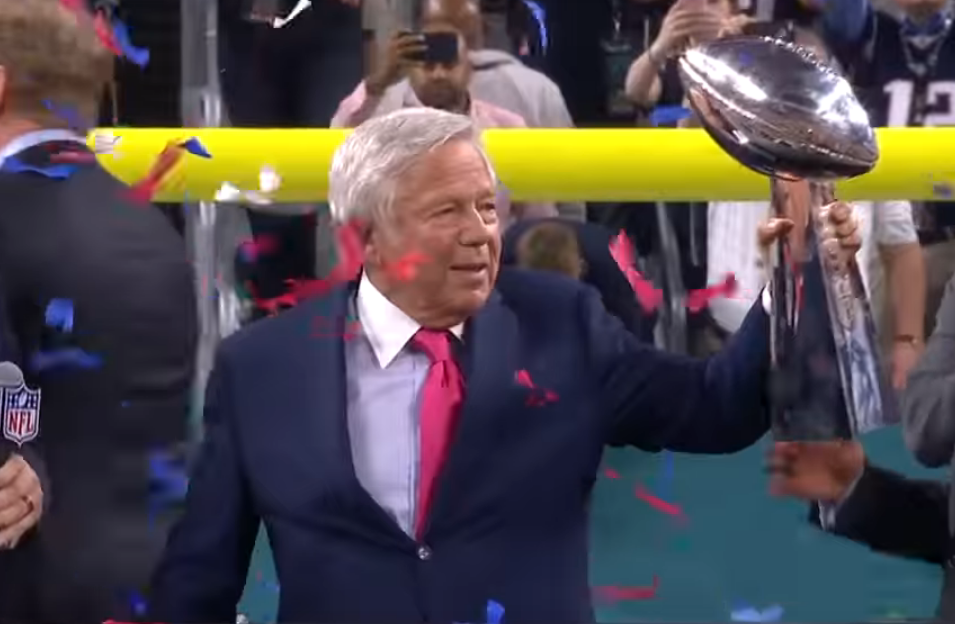 Robert Kraft Deserves To Be In The Hall of Fame


Tomorrow, seven very deserving men (Morten Anderson, Terrell Davis, Kenny Easley, Jerry Jones, Jason Taylor, LaDanian Tomlinson, and Kurt Warner) will get enshrined into the Pro Football Hall of Fame. They all earned their gold jackets and their moments tomorrow night, and I look forward to hearing all their speeches. While these few days are their moment, I would still like to talk about someone that deserves to be in Canton with them.

Robert Kraft, the owner of the New England Patriots, without question deserves to be enshrined in the Pro Football Hall of Fame. Since buying the team in 1996, the Patriots have been to the playoffs in 18 out of 23 seasons, they’ve had only three head coaches, and they’ve won five Super Bowls.

Without Kraft, things would be much different right now. Today, there might not be any pro football in the New England area if it wasn’t for the Patriots owner. Kraft denied James Orthwein, the previous owner of the team, a buyout on his lease of the stadium—Orthwein wanted to move the Patriots to St. Louis. Could you imagine the NFL without the Patriots (or any professional football team) up there in the Northeast Boston area?

In 1996, Kraft bought the team, and the rest is history. The $172 million Kraft paid for the Patriots was the most paid for a professional sports franchise at the time. Kraft buying the team was the start of perhaps the greatest run in the history of team sports (remember, they’re still atop the NFL and do not show signs of slowing down).

Kraft had three coaches—Bill Parcells, Pete Carroll, and Bill Belichick—and they are all arguably future Hall of Famers. Parcells is already in the Hall, Belichick will certainly be there, and Caroll might also get in. Parcells was already installed as the head coach when Kraft bought the team and things didn’t end on the best of terms, but Kraft showed great judgement when he hired Pete Carroll. And then he made an even better decision when he hired Bill Belichick in 2000, and he hasn’t needed to make a change since. Though things didn’t end ideally with Carroll, who was let go after three seasons, the decision was still made to hire him, which was a good one given his success as a football coach in both the NFL and college.

Obviously, bringing Belichick on to lead the football team has helped lead to the extraordinary success the franchise has had for nearly two decades. In that short time, under the leadership of Kraft and Belichick, the Patriots have become the gold standard of the NFL.

On the field is not the only place the Patriots have had this type of success, though. Kraft built Gillette Stadium in 2000 and it’s still one of the best in the NFL. He also built Patriot Place around Gillette Stadium. Foxborough would not be close to what it is today without Kraft and the Patriots.

Kraft is also one of, if not the most, beloved owners in the NFL. Just watch him around his players for a few moments and it quickly becomes clear that some of the players see him as a father figure—because he treats them so well, almost like they are his own children. The way Kraft stood behind Tom Brady during the unjust Deflategate witch-hunt is truly admirable.

If more owners in professional sports had the same qualities as Kraft, it would go a long way toward their team’s success. Kraft’s teams have not had any stretch of incompetence, drama, or losing.

The story of the NFL cannot be told without Robert Kraft. He made Foxborough, Massachusetts the spot to be at on Sundays during football. He is a loyal owner that has the backs of the members of his organization. And he helped build the Patriots into the gold standard in the NFL. Robert Kraft is a Hall of Fame owner if there ever was one.