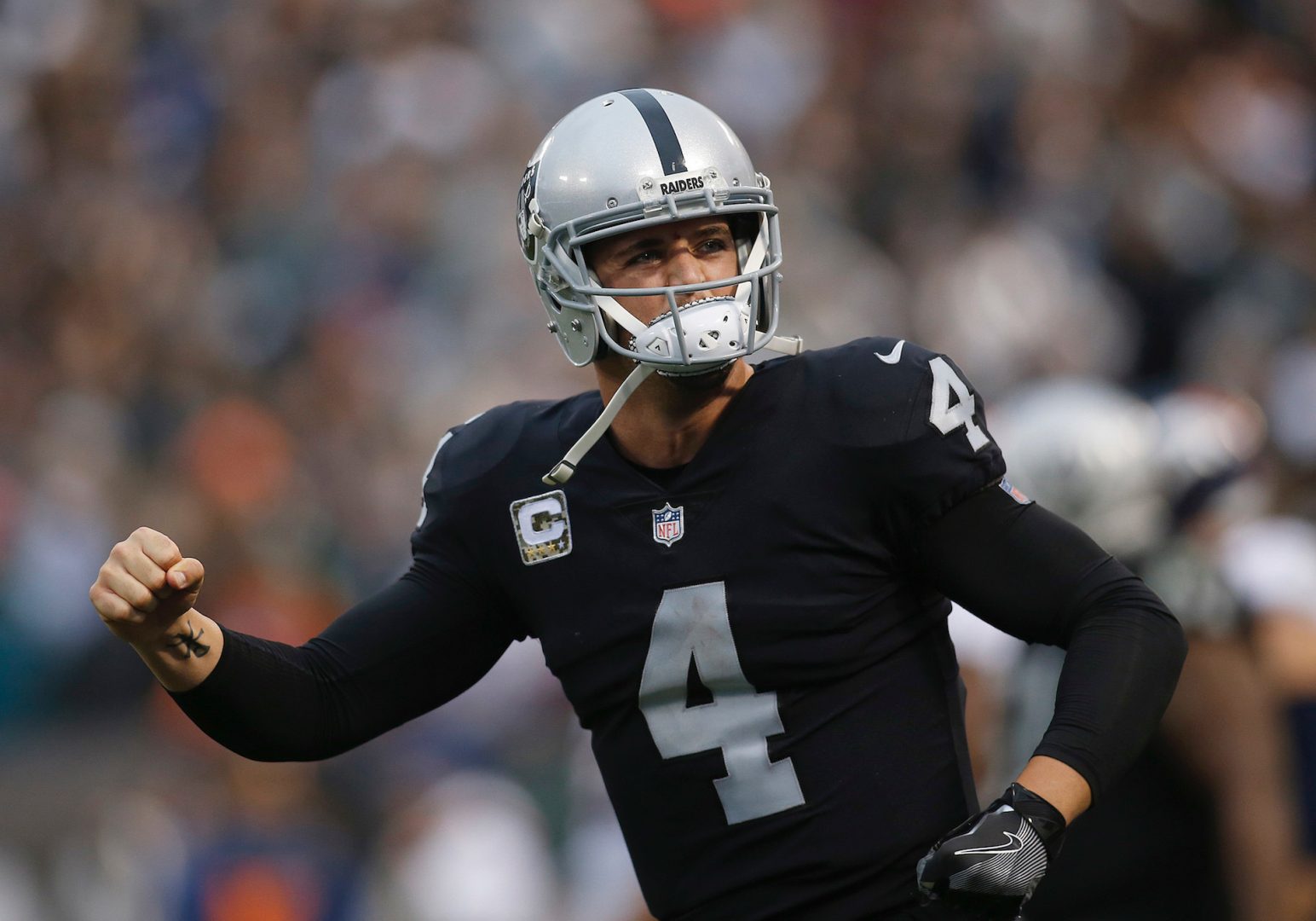 
The NFL delivers thrills throughout the year, from the season to the offseason. But what if the offseason was entirely scripted like professional wrestling? A WWE-like NFL storyline could get crazy, and this is how I would draw things up for entertainment value (while keeping things relatively realistic).

This alone would be a WWE-like storyline, as the CBA is expected to pass when the vote closes this Saturday at midnight. But it’s an anonymous vote, so who knows what will happen? NFL owners would not be thrilled with this scenario, but their teams would have the opportunity to use both the franchise tag and the transition tag this offseason.

The Titans use the franchise tag on Ryan Tannehill but allow Derrick Henry to test the market.

Tom Brady’s availability is looming, but the Titans decide against potentially alienating Ryan Tannehill, who turns an efficient season into a contract far exceeding $100 million. However, Tennessee does roll the dice with star running back Derrick Henry, letting him test the open market without the transition tag.

In this storyline scenario, it’s widely expected that Henry will test the market and return to the Titans after exploring what is out there. But the Falcons—who are in a tough cap situation—find a way to make a five-year, $75 million offer to the 26-year-old, and Tennessee decides to turn its attention toward a replacement in this year’s draft. Henry gives Atlanta maybe the two most dominant non-quarterbacks in the league on offense.

The Cowboys use the franchise tag on Dak Prescott and transition tag on Amari Cooper.

Not wanting to lose their young franchise quarterback or the star receiver they traded a first-round pick for, the Cowboys tag advantage of both tags after the players voted against the CBA. Prescott isn’t going anywhere, while Dallas can match any offer other teams make to Cooper.

But… Amari Cooper signs record-breaking deal with the Eagles, and Cowboys do not match it.

The Eagles are desperate to give Carson Wentz all the help he can get, and they attempt a move they’ve tried in the past by weakening a division rival while simultaneously adding to their roster. The contract offer is the same in terms of annual salary but exceeds Atlanta’s new deal with Julio Jones from last year by one season: four years, $88 million. Jerry Jones fights his emotions and lets Cooper go to Philadelphia for a record-tying annual salary.

The Jets acquire Stefon Diggs from the Vikings for a second-round pick.

It’s evident that Stefon Diggs has been open to a trade out of Minnesota (he just posted a video of himself working out in an Arizona Cardinals shirt today), and the Vikings might decide it’s time to just move on. Instead of someplace like New England or Baltimore, Minnesota ships him off to a Jets team with an uphill climb to get past the Pats and Bills in the AFC East.

Bills add Jordan Howard as a short-yardage back to compliment Devin Singletary.

Jordan Howard is not getting a ton of attention, but he is a two-time 1,000-yard rusher with productive campaigns ahead of him—it won’t be a surprise if he’s back near the league-lead in rushing at some point if he’s in the right opportunity. This would be a great move for a storyline-based NFL, as Bills Mafia would absolutely love to add a gritty player like Howard to a team on the rise. Tag-teaming with Josh Allen, Howard would help finish drives and finish games for Buffalo.

The Buccaneers cannot afford to let Shaquil Barrett go, so they tag him. But Bruce Arians decides against bringing back Jameis Winston, and the other free agent options don’t quite work out, leaving the Bucs without a bonafide starting quarterback—it’s pretty clear they will draft a signal-caller in April. The team sits tight at No. 14 and pulls off shocker by selecting Georgia quarterback Jake Fromm, who Arians holds in very high regard. It would be hilarious to see people’s reactions to the selection (just look at everyone bashing Daniel Jones last year before turning silent after his success), so this is probably my favorite part of the scripted offseason.

Sticking with Tampa Bay, the team acquires David Johnson to upgrade the running back spot. The Cardinals re-sign Kenyan Drake after his stellar play in Kliff Kingsbury’s offense last year.

Raiders beef up their defense, add Byron Jones, HaHa Clinton-Dix, Jamie Collins in free agency and trade up for Isaiah Simmons in the draft in attempt to build new bully squad heading into Las Vegas.

Jon Gruden has insisted that guys want to come play for the Raiders, and he backs up that talk with another excellent free-agent haul on the defensive side. The Raiders are looking to build an athletic, physical football team for entrance into their brand-new Death Star-looking Allegiant Stadium. The Vegas defense might look like this:

Marcus Mariota’s fit with the Raiders is well documented. Gruden loves him, and the running element will add more diversity to his offense. Also, a ton of Hawaiians live in Vegas, so it’s perfect from a marketing perspective for a scripted offseason. The Bears get Carr, but they insist Mitchell Trubisky will enter the season as the starting quarterback, with Carr as the backup.

Giants lose out on Leonard Williams, but they sign Jadeveon Clowney and James Bradberry on defense, along with Jack Conklin at right tackle. New York deals tight end Evan Engram to recoup the third-round pick lost in the Williams trade. General manager Dave Gettleman then trades back for the first time and still gets Auburn defensive lineman Derrick Brown in the first round.

Dave Gettleman starts wheeling and dealing as he looks to get the Giants to contend in 2020. Like the Buccaneers storyline outlined above, it would also be funny to hear people still criticize Gettleman (perhaps the most criticized person on Twitter by people that believe in analytics over everything) when he’s acquiring draft picks and building a tough roster. The defensive line of the Giants would be like a wall if they add Brown to the mix.

Dolphins trade up to the No. 1 overall pick to select LSU quarterback Joe Burrow.

The Dolphins will reportedly try to trade up for Joe Burrow, so this scripted offseason allows them to pull it off, dealing multiple first- and second-round selections across 2020 and 2021 to move up to No. 1. The move would be the stunner of the offseason, and the reactions would be strong on both sides. In anticipation of trading away premium draft picks, Miami decides to target Melvin Gordon in free agency instead of selecting a promising rookie like Jonathan Taylor or D’Andre Swift.

Much of the strong reaction from a blockbuster trade for No. 1 overall would be aimed at the Bengals, who would pass on the hometown quarterback in favor of enough draft picks to add a bunch of young pieces to the team. Cincinnati selects Oregon quarterback Justin Herbert at No. 5 after coaching him at the Senior Bowl.

Chargers and Panthers add more to their unofficial trade, as Cam Newton is dealt to Los Angeles for a mid-round pick. Carolina signs Teddy Bridgewater.

Carolina wanted to move up for Joe Burrow, but the Dolphins easily outbid them. The Panthers instead get Teddy Bridgewater, who will remain in the NFC South to face the Saints twice per year. Meanwhile, Newton lands in a city that fits his personality on a team that is ready to compete for a title this season.

Tua Tagovailoa suffers a draft-day slide, with some teams concerned about his injury history.

Draft day slides unfortunately always get a major spotlight because they are the unexpected, and Tua falls with a number of teams set at quarterback. The drop ends when the Jaguars use their second first-rounder (No. 20 overall) to select the former Alabama quarterback. Jacksonville can take it easy with Tua, sit him for a year, and evaluate the quarterback situation next offseason, with the ability to potentially swing Tagovailoa in a trade in 2021.

With Al Michaels remaining at NBC, Manning passes on joining the broadcast booth, instead keeping an eye on potentially leading an NFL front office—or any number of options he’ll have—in the near future.

Retirement and unretirements happen all the time in the WWE; and, with everyone expecting Rivers to join the Colts or Buccaneers, retirement would be a twist third option for the veteran quarterback. But maybe Rivers would be interested in joining Monday Night Football if it doesn’t mean too much time away from his big family. What about Rivers and old rival Jay Cutler on the same team in a three-man booth?

Tom Brady finds little interest on the open market, re-signs with the Patriots… while getting Antonio Brown back and adding two more weapons.

The Buccaneers show the most interest in Brady, but—despite the elite skill position group—he would rather not play behind a below average offensive line on a new team in hot-weathered Tampa Bay. Aside from that, the G.O.A.T. is stupefied by a lack of interest in his services. As determined as ever after feeling disrespected by the rest of the league, Brady is extremely excited to prove people wrong again and assures New England fans he was never going to leave them. Using the Bucs and a mystery team as leverage, Brady is able to convince Robert Kraft to give All-Pro receiver Antonio Brown another chance, and the Patriots also add Nelson Agholor (who killed them in the Super Bowl a couple of years ago) to receiving corps while acquiring the uber-talented O.J. Howard at tight end. Fit for a WWE script, the Patriots are the title favorites and the most talked about team in the league for another year.