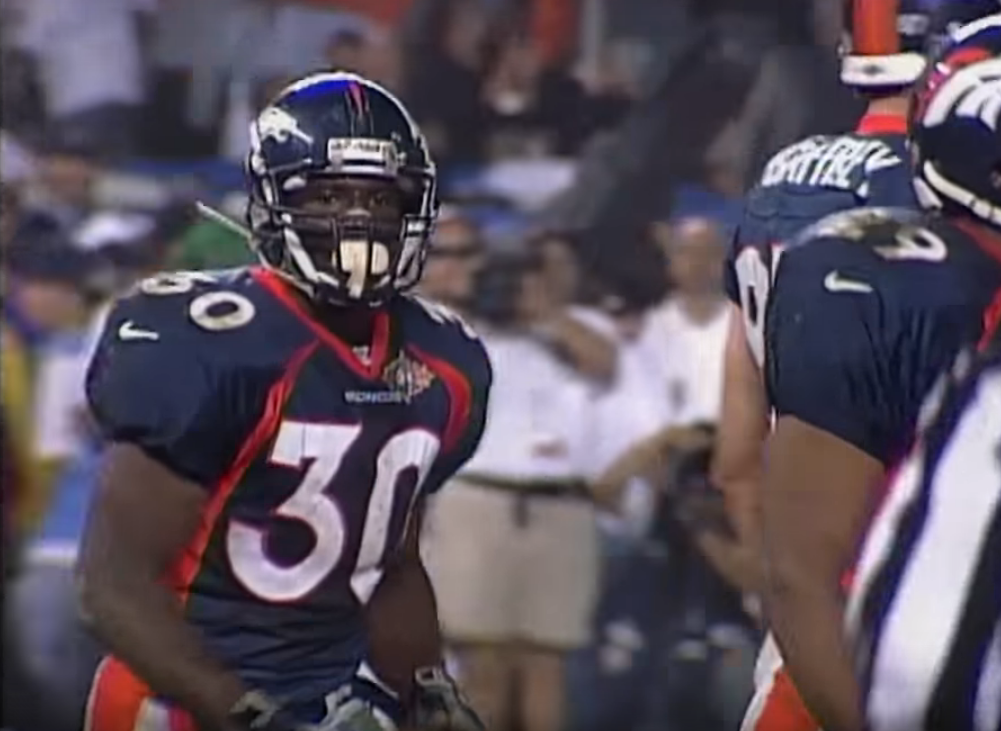 
It all started with a routine kickoff in the third quarter of a 1995 preseason game in Tokyo, Japan. 49ers kick returner Tyronne Drakeford took the kick at the ten-yard line and was cutting towards the sideline as he crossed the twenty when an unknown rookie in an orange number 30 jersey flashed into view from Drakeford’s left and absolutely demolished the unfortunate returner with a textbook tackle. Eyes popped all along the Denver Broncos sideline. As Hall of Fame tight end Shannon Sharpe recalls, “I was like, ‘Who was that!!…a running back?!” That anonymous running back’s name turned out to be Terrell Davis; within a year, there would be nobody left in the NFL who didn’t know his name.

Terrell Davis is entering the Pro Football Hall of Fame in Canton tonight, and it never would have happened without one great tackle on special teams. The day before that game against the 49ers, Davis had been sitting in the Broncos’ hotel room in Tokyo and contemplating giving up on football. An unheralded sixth-round pick out of Georgia, Davis had arrived in training camp to find himself seventh on Denver’s depth chart. He hadn’t gotten a single carry in their first preseason game, and doubt was gnawing at him over whether he had any real shot at an NFL career—to the extent that he actually considered turning in his playbook then and there and jumping on the first flight home from Japan. Just last week, as Davis was lounging around the Broncos’ practice facility celebrating his induction into the Hall, he reflected, “Let’s just say if I spoke better Japanese, I wouldn’t be here…I’m telling you, I was this close to walking out of there because I looked at everything around me and thought I had no shot at making the team.” It’s a good thing Davis never took any Japanese classes at the University of Georgia; his eye-opening hit on Drakeford impressed Denver’s coaching staff so much that they decided to give him a few reps with the offense to see what he could do. Davis finished the game in Tokyo as Denver’s leading rusher with 46 yards on 11 carries. A few weeks later, head coach Mike Shanahan called Davis into his office at the conclusion of training camp and informed him that he would be the Broncos’ starting running back in 1995.

To say that Shanahan’s decision paid off would be an understatement. Davis burst onto the NFL scene with 1,117 yards rushing, finishing second in the voting for Rookie of the Year…and that was just a warm-up act. Over the next three years, TD became the most dangerous rushing threat in professional football, racking up 5,296 yards and 49 touchdowns on the ground while leading the Broncos to consecutive Super Bowl victories. He took home MVP honors in the 1998 season after becoming just the fourth running back to rush for over 2,000 yards in a single season. And in perhaps his finest hour, he carried the Broncos to a stunning upset win over Green Bay in Super Bowl XXXII. While the aging John Elway scuffled and misfired throughout parts of the game, Davis kept Denver in control by running roughshod over the NFL’s biggest, baddest defensive line. TD tallied 157 yards and a Super Bowl record three rushing touchdowns, including the game-winner with 1:47 to play. After getting kicked in the head late in the first quarter, Davis was struck with a migraine headache so severe that he lost his vision for several minutes, but that didn’t stop him from serving as a decoy on a crucial goal line play-fake, allowing John Elway to waltz into the endzone untouched on a naked bootleg as the entire Packers defense zeroed in on the still-blinded Davis. His no-brainer Super Bowl MVP award was the cherry on top of an unmatched postseason resume—Davis finished his career with a 142.5 yards per game average in the postseason, by the far best mark of any running back who has played in five or more playoff games.

At the beginning of the 1999 season, no one would have argued that TD was the best running back on planet Earth. But just as his run of dominance began with a tackle, it would also end with one. In the fourth game of the 1999 season, Davis was pursuing Jets safety Victor Green up the sideline on an interception return when teammate Matt Lepsis dived at Green’s ankles. Lepsis inadvertently drove a shoulder into Davis’ knee, and Denver’s star running back collapsed on the field with a torn ACL. Davis missed the rest of the 1999 season and—while he would return for two more seasons in a Broncos uniform—he was never the same player again. Knee problems plagued him continually, sapping away his electrifying side-to-side agility and limiting him to less than 1,000 yards rushing over the rest of his career. His days as the league’s best running back were over, and it seemed that the brevity of his reign might cost him any shot at the Hall of Fame—players with peaks as short as Davis’ rarely end up receiving the NFL’s highest honor. Davis became Hall of Fame-eligible in 2007, but his first ten years of eligibility all ended the same way—with a snub from the Hall’s voters and a “better luck next year”. It began to feel as though a trip to Canton just wasn’t meant to be; then again, there was a time when it seemed like a career in the NFL just wasn’t meant to be for Davis, either. And then on the eve of Super Bowl LI, as Davis was sitting in his hotel room in Houston getting ready to cover the big game for NFL Network, he heard someone knock on his door. Davis opened the door to find David Baker, the executive director of the Pro Football Hall of Fame, waiting outside with a knowing smile on his face. Before he could say a word, TD burst into tears. After a decade of waiting, he had finally secured his place in the NFL’s pantheon of legends.

The moment you realize you're a Hall of Famer … pic.twitter.com/d3zBdzMUJt

There will probably still be some football fans who believe that Davis doesn’t belong in the Hall. They will point to his abbreviated career or the fact that he played in Denver’s vaunted zone-blocking running system, famous for turning guys like Olandis Gary, Tatum Bell and Reuben Droughns into 1,000-yard rushers. They’ll say that Davis was never the fastest running back, nor the strongest, nor the most explosive. To those fans, I’ll just say: go back and watch the tape. Watch closely and you’ll see a running back who did all the little things right every time he was on the field. You’ll see Davis making the right read, choosing the right hole and hitting it with perfect timing on every single play. You’ll see him sliding through an infinitesimally small gap in the line, hitting the second level and juking a linebacker right out of his shoes with his otherworldly lateral quickness. And you’ll see him throwing out blocks that few running backs in this league are even capable of making, squaring up his shoulders and flattening blitzing linebackers. The fact that his entire career was jumpstarted by a special teams play tells you all you need to know about TD—he wasn’t just a great running back, he was a great football player. He was never the best at anything, but he was pretty damn good at everything, and that’s a claim that very few players can make—especially in the modern era, where running back has become an increasingly specialized position. It’s fair to say that we may never see another running back like Terrell Davis.

It’s been almost twenty-two years to the day since Davis flattened Tyronne Drakeford in a meaningless game in Japan; but every summer, in the dog days of training camp, the Broncos’ incoming class of rookies still get shown that video by the team’s coaching staff. The moral of the story is clear: it doesn’t matter how low you are on the depth chart or how little anyone knows about you—if you go out on the field and play your heart out every time you get the chance, then the sky’s the limit. And with Davis’ well-deserved entrance into Canton finally coming to pass, this year’s Broncos rookies will hear something else too: make the right play at the right time, and you just might put yourself on the road to the Hall of Fame.