Home / frontnfl / The AFC South Is Becoming A Force 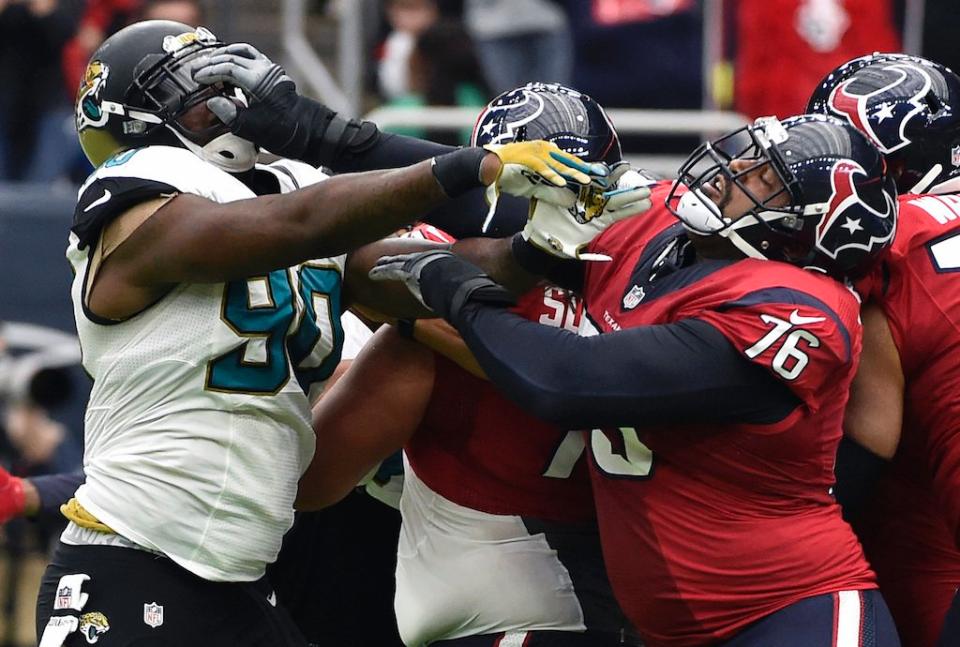 The AFC South Is Becoming A Force


Believe it. The AFC South Division will be the best in the 2017 NFL season.

I know it sounds crazy. The division with the Jacksonville Jaguars and Tennessee Titans—two of the worst franchises in the last decade—and the Houston Texans—who have quarterback question marks—and Indianapolis Colts—who lack almost everything but a QB? Yeah, that’s right.

It’s simple. Take a look at history and it's clear; divisions cycle through mediocrity and excellence. The NFC West was riddled with subpar play earlier in the decade with the 49ers, Rams, and Cardinals all fighting for 6 win seasons while the Seahawks winning division titles with 7 win and 8 win seasons. A couple of years removed, and we have the Seahawks getting to back-to-back Super Bowl, the 49ers with three straight NFC Championships, and the Cardinals finishing with three 10+ win seasons.

Take another example. We are two seasons removed from the NFC East having a 9-7 division winner (the Redskins). Last year, the Cowboys finished at the top of the NFC during the regular season and Giants in the Wild Card, good for two of the top three records of the NFC. While teams like the Patriots and Packers stay at a consistent high level, bringing their division to above average status, the mediocre teams below them always cycle through highs and lows. The Dolphins went from last in the division to a Wild Card team last year. Detroit went from mediocre in 2015 to a Wild Card team last year as well. History will correct the ship in the AFC South.

Furthermore, look at the moves the teams in the South have made. Let’s start with the gutter: the Jacksonville Jaguars. Jacksonville has strung together two high-spending offseasons, dropping millions on luxury players. Malik Jackson, Prince Amukamara, A.J. Bouye, Calais Campbell all boast promise of an elite defense. Last year’s fifth overall pick Jalen Ramsey has shown the sparks of being a Pro Bowl defensive back, while third-round pick Yannick Ngakoue showed talent, racking up eight sacks. On the other side of the ball, Jags hold onto promising young receivers in Marqise Lee, Allen Hurns, and Allen Robinson have physicality and speed, while T.J. Yeldon and Chris Ivory provide a one-two punch in the backfield. While quarterback Blake Bortles regressed in 2016, he showed great maturity and impressive play in 2015. If Bortles can regain a portion of that magic, the Jags have requisite pieces surrounding him on both sides of the ball to elevate this team.

The Indianapolis Colts have been enigma. Massively underachieving when expectations were astronomical and overachieving when expectations were nonexistent. Nonetheless, it’s impossible to ignore perhaps the greatest potential in the NFL, quarterback Andrew Luck. When given an average offensive line and a developing defense, Luck took the Colts all the way to the AFC Championship. Despite former general manager Ryan Grigson’s missteps the past few years, the Colts have looked to move in the right direction. With minimal talent on the team last year, the Colts finished 8-8 and a game away from a division title. While the Colts were relatively quiet in free agency, they are a draft away from adding a valuable corner and edge rusher to contend with the rest of the division.

Houston Texans are the most assuring of the four AFC South teams. Houston heralded the number one rated defense in 2016 (in terms of yardage), and that was without reigning Defensive Player of the Year J.J. Watt. Jadeveon Clowney has shredded the bust title bestowed upon him, by some, with a huge breakout season. Despite the farewell of Bouye and Quintin Demps, this defense still maintains a lot of talent starting with their defensive line, and they are poised for another top five defense. Meanwhile, last year, Rookie of the Year candidate for the first half of the season, speedy receiver Will Fuller, has a year under his belt while number one receiver DeAndre Hopkins has shown elite talent with suboptimal quarterback play. Lamar Miller is an explosive running back with great pass catching ability. Houston could go with Tom Savage and perhaps draft a rookie quarterback while they allow the offensive to gel. Having won back to back division titles, Houston is on the cusp of causing real mayhem in the AFC.

Lastly, the Tennessee Titans were the biggest surprise of 2016. Having finished in the bottom two in the NFL in consecutive seasons, Titans sprung to a 9-7 through elevated quarterback play from Marcus Mariota and a dynamic running attack from DeMarco Murray and Derrick Henry. Likewise, they held onto a successfully cohesive defense despite the clear lack in starting corners. With Brian Orakpo, Derrick Morgan, and Jurrell Casey all returning, with the additions of Jonathan Cyprien and Logan Ryan in free agency, the Titans defense is looking very potent. Sylvester Williams will add much needed depth at the defensive line to create a strong attack with Casey. And with the Titans poised with two top 20 picks in the upcoming draft (5th and 18th), Titans can fix their top needs in a corner and receiver with elite, instant impact players. If last year was any sign, these team is on a similar trajectory of the Oakland Raiders and will be able to compete with anyone in the NFL next season.

With the previous power in the Ravens, Bengals, Broncos, and Chargers all fading recently with large holes to fill and many questions with their rosters, the AFC South has perfectly positioned to take the top seeds from these teams. The Steelers, Chiefs, and Patriots all have veteran quarterbacks, but they are getting up there in age, while Dolphins and Bills will need to rely on potentially shaky quarterback play. Young quarterbacks, dynamic playmakers, top level defenses, and new coaches in the AFC South are all attractive to free agents, while the teams have the ability to utilize the 2017 draft to really position themselves to drive towards a Super Bowl run starting this year. The build of all four teams indicate they might be able to push for long-term success.

Don’t be shocked if three South teams make the playoffs next year or if a team makes a strong run for the one seed in the AFC. These teams are young and hungry. Built with high level defenses, smash mouth offenses, the NFL is about to be hit with a force it’s has not had since the days of Peyton Manning and Steve McNair fighting for co-MVPs. Welcome back AFC South. We have missed you.