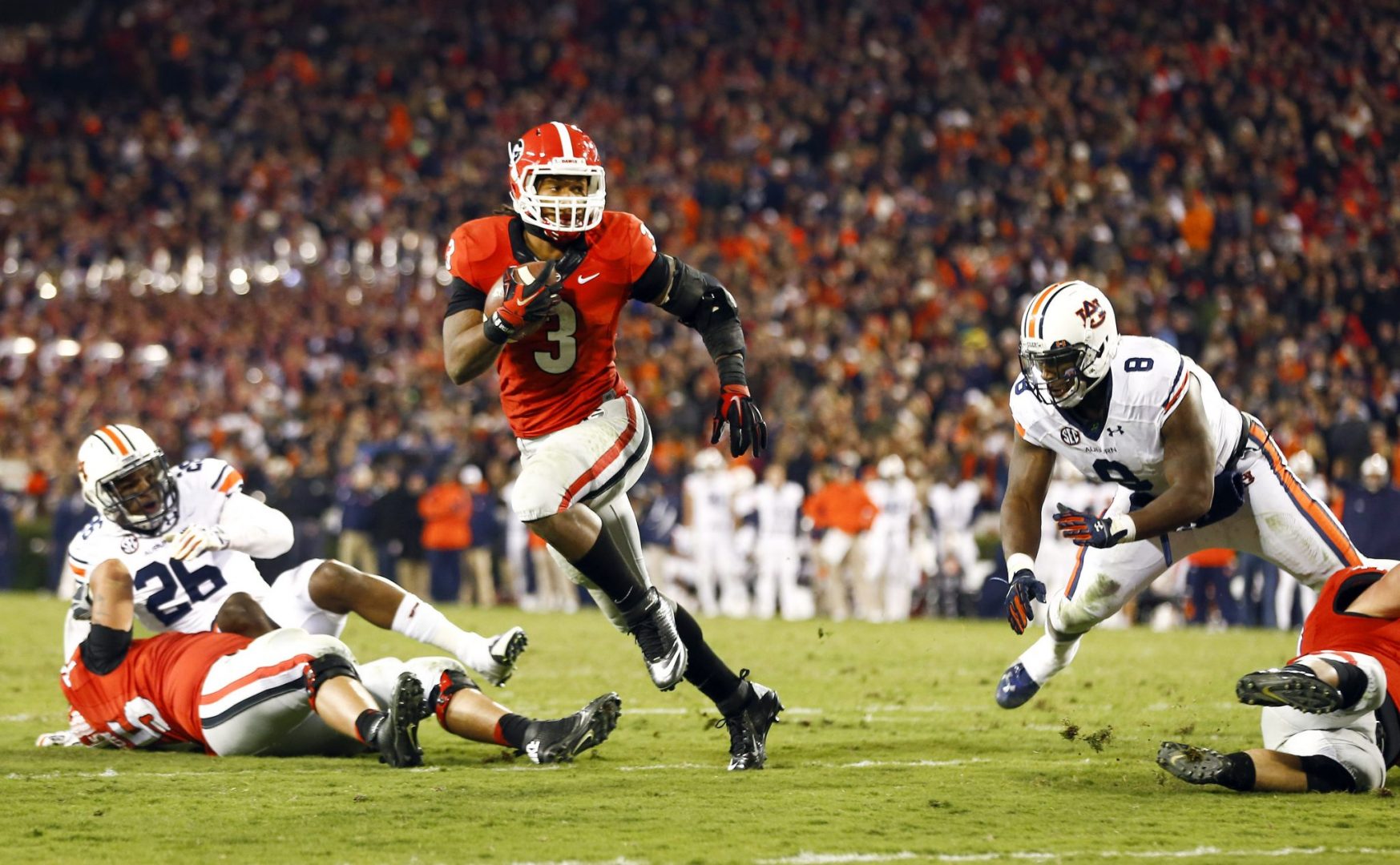 The Best Ten Running Back Prospects Over The Last Ten Years


Running backs are not valued like they used to be. There will probably never be another year where three backs get drafted in the top five (like in 2005 with Ronnie Brown, Cedric Benson, and “Cadillac” Williams), but the position is making a comeback over recent years. The last decade included a stretch where it looked like running back might only have one or two selected in the first round per every two or three years, but that’s changed recently. The last three years in particular have been really strong for running backs coming out of college, and this is how I have the top ten prospects over the last ten years. [Note: including this year’s draft, it’s really 11 drafts dating back to the 2008 draft.]

Especially today, it’s not often a running back is considered the top overall player in the draft and in real consideration for the No. 1 overall pick, but that’s exactly what’s happened with Saquon Barkley. The former Penn State star can simply do anything you ask of him out of the backfield, he has ideal size, elite athleticism, and his attitude might be better than any of his athletic skills. Barkley is a slam-dunk prospect and perhaps the best running back prospect of all-time.

Injuries must be the reason Todd Gurley didn’t go higher than tenth in the draft, because he was an absolute gamebreaker at Georgia. Anytime he touched the ball, there was a chance the ball would end up in the end zone, whether it be on a handoff, a pitch, a reception, or a return. Perhaps more than anyone on this list other than Barkley, Gurley just has another gear that not many guys have.

The College Football Playoff is really where Ezekiel Elliott broke through and showed that he was elite prospect, as he ran through the Alabama defense like they weren’t a college football dynasty. Elliott would score whenever Ohio State’s big offensive line gave him a crease, and he was an exceptional pass protector at the college level. His attitude might have been a slight concern, but Elliott’s skill could not be questioned a couple years ago.

Adrian Peterson just misses this list because he was drafted in 2007, but Darren McFadden was the last of the true running backs to go in the top-ten for several years until Trent Richardson went in 2013. McFadden was simply a monster at Arkansas, and I think everyone probably remembers his 206-yard, three-touchdown effort in Arkansas triple-overtime win against the No. 1 LSU Tigers in his final season in college. Injuries hit him hard in the NFL, but he was an outstanding prospect.

Wisconsin is obviously known for churning out fantastic college backs, and Melvin Gordon was in a split backfield with James White and Montee Ball for much of his time with the Badgers—and he only had two receptions in his first two seasons. Gordon’s junior season allowed him to get fed the rock, and he had a year for the ages, rushing for 2,587 yards and 29 touchdowns—including setting the NCAA record for yards in a game (breaking LaDanian Tomlinson’s record, which was then broken by Oklahoma’s Samaje Perine just one week later). He was right up there with Todd Gurley, in my opinion, and he’s shown what he can do in the NFL as an all-around weapon for the Chargers.

As a pure runner, Leonard Fournette could not have given much more as a prospect. He might not have tested as a top-notch athlete during the NFL Combine, but his speed, balance, vision, and power were unquestioned with the pads on. Fournette’s run where he called Steelers safety Mike Mitchell over to tackle him during his rookie season last year pretty much sums up Fournette’s running style.

If Christian McCaffrey was allowed to come out after his sophomore season, there was talk about him being in discussion for the top pick in the draft, and maybe he should’ve been last season anyway. Clearly, McCaffrey had a ton of ability as a receiver and could be lined up anywhere on the field and get open, but his prowess as a between-the-tackles runner was also extremely underrated. McCaffrey was a great prospect, and the Panthers might use him more as a straight-up running back in 2018 and beyond.

Somehow, Derrick Henry went in the second round of the 2016 draft, and it’s maybe because there’s no one really like him out there. He’s about 6’3”, 230 pounds with super long limbs and an upright running style. Teams might have been afraid to call him a top-notch prospect, but maybe he should have been compared to Eric Dickerson as a potential stud.

His NFL career clearly didn’t go as planned, despite a rookie season that included 12 total touchdowns on the Browns. But in college, Trent Richardson was an all-around running back that helped lead Alabama to two national titles. Richardson was a tough runner that also had fantastic ability as a receiver (10.7 yards per reception during his college career), but perhaps his team had a lot to do with his success, and maybe he didn’t have the same support set up as he did at Alabama.

Unlike Derrick Henry, the reason Joe Mixon dropped to the second round of the draft was clear: he struck a woman when he was a freshman in college at Oklahoma. On the field, Mixon is a classic all-around running back that moves like a wide receiver while in a running back’s body. Mixon had an up-and-down rookie season, which might be a slight concern, but there is no doubt he has a ton of potential and could emerge as a top five back in the NFL.