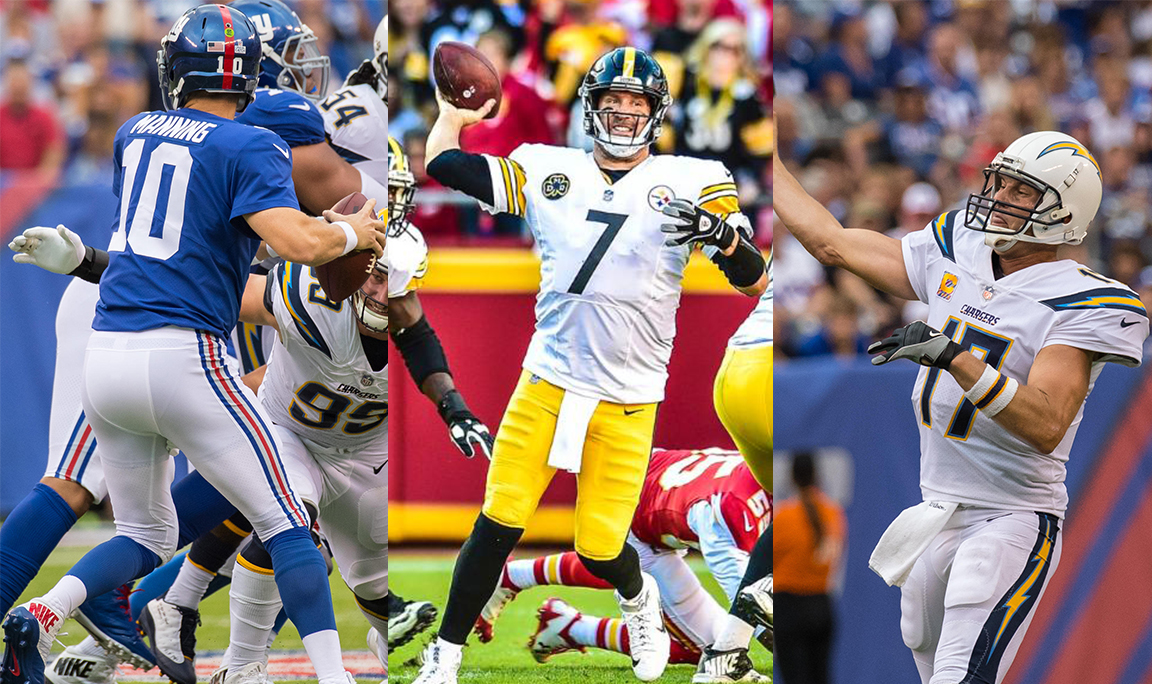 The End Is Near For The Quarterback Class of 2004


If you were to rank every quarterback class in the history of the NFL draft, the crop of signal callers that arrived in 2004 would probably rank just below the legendary class of 1983 which featured such luminaries as John Elway, Dan Marino and Jim Kelly. That 2004 draft saw Eli Manning go first overall to the San Diego Chargers, followed by Philip Rivers going fourth to the New York Giants (the two were swapped soon afterwards after Manning refused to sign with San Diego, in case you’d forgotten that little soap opera). Seven picks later, the Pittsburgh Steelers selected Ben Roethlisberger eleventh overall. For the last decade, those three signal callers have represented the second tier in the hierarchy of NFL quarterbacks±—while they never ascended to the elite heights of contemporaries like Drew Brees, Tom Brady, or Eli’s brother Peyton, they have been among the most consistent and successful passers of their generation, combining for 584 games played, 145,461 passing yards, 961 touchdowns and four Super Bowl titles. You could argue that no draft (or at least no first round) in recent memory has done more to influence the NFL’s balance of power.

It has always seemed as though the career trajectories of the Manning-Rivers-Roethlisberger trio (and particularly Manning and Rivers, who thanks to that post-draft trade will always and forever be judged against each other’s accomplishments) are almost symbiotically intertwined; it’s fitting then, that all three have arrived almost simultaneously at a career crossroads in 2017. All three are struggling to live up to their usual lofty standards, playing for teams who have been disappointing in various ways through the season’s first six weeks. After a decade-plus of consistency, the sun may be setting on the vaunted quarterback class of 2004.

“Maybe I don’t have it anymore.” Those were Ben Roethlisberger’s words, just a few moments after a Week 5 loss to the Jaguars in which he had played one of the worst all-around games of his career, posting a horrid 1.58 AY/A on 55 attempts and belching up five interceptions. His tone of voice suggested that he was just making a joke at his own expense, but there may have been a kernel of truth within that quip—his 78.2 passer rating and 3.6% interception rate so far in 2017 would be his worst single-season mark in either category since 2006. Just three years after putting up the best all-around season of his career in 2014, Big Ben looks to be trending firmly in the wrong direction—his statistical production is down across the board, and a loaded Pittsburgh offense that was expected to be dominant in 2017 with the return of Martavis Bryant has looked surprisingly pedestrian through the season’s opening weeks, ranking just 11th in the league in passing DVOA and getting outplayed by teams quarterbacked by Mike Glennon and Blake Bortles (and yes, they did end Kansas City’s undefeated season this past Sunday, but that was largely due to a great effort by Le’Veon Bell and the defense). Roethlisberger has been as dependable as any quarterback in football over the past decade, but the end of the road suddenly seems to be approaching much faster than anyone realized.

When Big Ben floated the idea of retirement this past offseason, it caught many people around the league by surprise; just a few months later, that idea doesn’t seem so crazy. What is surprising, however, is how little the Steelers seem to have considered a plan of succession for the game’s most important position. I’ve always found it odd that Pittsburgh didn’t invest in a higher-end backup for Roethlisberger, given that he almost always hits the inactive list at some point—he has played a full sixteen-game season just three times in his career, and yet the Steelers have continued to roll with bargain bin replacements like Landry Jones who bring the offense to a standstill when Roethlisberger goes down. That neglect looks even more reckless now, with Pittsburgh staring down the barrel a Big Ben-less future. This team is built to compete for championships in the present, not down the road—with more than $185 million committed over the next three years to their core group of talent (Antonio Brown, LeVeon Bell, David DeCastro, Maurkice Pouncey, Stephon Tuitt and Cam Heyward—and that is not including the cost of resigning Bell when he hits free agency next year, which will probably equal the GDP of a small country), this team is not in a place where they can spend a few years conducting trial-and-error auditions under center.

Roethlisberger’s struggles notwithstanding, the Steelers are 4-2 and looked well on their way to a division title in the weak AFC North. The situation is much less rosy for his class of ‘04 draftmates; the Giants and Chargers have combined for just three wins on the season (one of which came when they played each other, because someone had to win that game) and are quickly plummeting to the bottom of their respective (very tough) divisions. Manning’s Giants have been particularly pathetic. After running up eleven wins last season behind a dominant defense, Big Blue spent big bucks to bring in new weapons for Eli Manning during the offseason, hoping to get one more championship run out of him. But the high-flying passing attack that New York expected has utterly failed to materialize; the offensive line has been putrid, Manning himself has struggled to get any kind of rhythm going, and the top three receivers on the depth chart have all been lost to injury. Any notions of another miraculous Eli Manning playoff run have been thoroughly quashed—at this point, just getting back to .500 would be a borderline-miracle.

To be fair, Eli hasn’t been nearly as bad as people seem to think this year—statistically, he’s been more or less the same player as he was last year, and just a couple ticks off from the peak years of his career. He is far from the only, or even the biggest, problem on this Giants team. That being said, the fact remains that Eli is just a few months from his 37th birthday, his play is slowly but surely declining, and he’s stuck on a capped-out team that appears to be going nowhere fast. As much as he’d probably love to reclaim sole possession of first place in the Manning family Championship Rings Leaderboard, the chances of that happening seem to be getting slimmer and slimmer. Eli Manning at 36 does not resemble Peyton Manning at 36—he doesn’t have it in him to drag a mediocre team to greatness through the sheer magic of his right arm (and, honestly, he probably was never as good as his reputation suggested…but two famous Super Bowl upsets against an all-time great dynasty will do funny things to our perception of a quarterback). Eli has started every single Giants game since Week 9 of the 2004 season; there’s a lot of cumulative wear and tear on his body, and that tends to catch up to quarterbacks in a hurry as they get into their late thirties—just ask Eli’s older brother. All things considered, it’s hard to imagine the Eli Era lasting much longer in New York.

With that being the case, it may just be a blessing in disguise that this Giants team imploded so quickly and spectacularly. Like Pittsburgh, the Giants don’t appear to have a quarterback of the future on their roster (although it’s hard to judge Giants backups, given that Eli’s Iron Man streak of starts has kept him from ever seeing meaningful action); unlike the Steelers, the Giants will likely have a top-five pick in a 2017 draft that is loaded with promising signal callers. Disappointing as their performance has been this season, it may end up ensuring a smooth transition under center when Manning decides to hang up the cleats.

And then there’s Philip Rivers. Rivers has often seemed like the odd man out of the 2004 class—he’s the only one without a Super Bowl ring, and seems like the least likely of the trio to punch his ticket to the Hall of Fame (although he has put up comparable career numbers in significantly fewer games). While Roethlisberger and Manning locked up multiple titles with the help of stellar defensive units, Rivers has spent most of his career dragging mediocre rosters to better records than they deserved. In the twilight years of his career, his Chargers have been almost comically unlucky—over the last three years, the Chargers have been devastated by injuries to an absurd degree and somehow gone 6-19 in games decided by one score or less. To add insult to injury, he’s now stuck in the worst football market in the league, playing his “home” games in a tiny, half-empty stadium where most of the fans that do show up are there to cheer for the other team. It’s hard to find any player in the NFL right now who looks more miserable than Rivers, and it’s fair to wonder how much longer he will put up with the indignity of playing sixteen games a season in front of a hostile crowd for a team that looks years away from contention.

It would probably be in his best interest to get out of Los Angeles and use whatever bullets he has left in his arm to chase a title somewhere else; unfortunately for Rivers, he’s signed with the Chargers through 2019 with a cap hit exceeding $22 million for each of the final two years. He could ask for a trade, but a contract that hefty is almost impossible to trade in a salary cap league (as we saw this offseason when the Cowboys tried to shop Tony Romo)—the few teams who could make such a trade work are squads like the Browns that would offer little hope of title contention anyway.  Even though Rivers’ performance hasn’t declined as significantly as his ‘04 classmates, it’s not a stretch to imagine him hanging it up, possibly as soon as the end of this season. If that is the case, the Chargers, like the Giants, may end up thankful for their miserable record this season if they elect to go fishing for their quarterback of the future in the loaded 2017 class. And wouldn’t that be a perfect ending to the careers of Manning and Rivers, who have been intrinsically linked from the day they were drafted, if their successors were also drafted on the same day, within a few picks of each other, from a class of quarterbacks that looks like it might be the best one to come along since…wait for it…2004?