Home / frontnfl / The Giants Did Wrong By Eli Manning 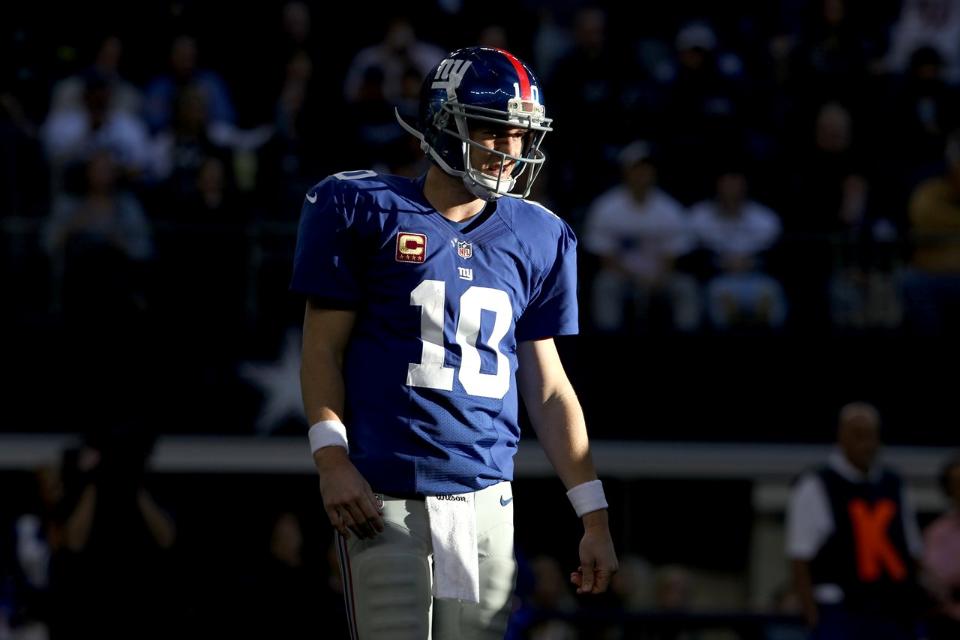 The Giants Did Wrong By Eli Manning


This Sunday, Eli Manning’s 210-game streak as the starting quarterback for the New York Giants will come to an end. Not because of an injury that he can’t play through, or because of extreme ineffectiveness like his older brother went through with the Broncos a few years ago, but because the Giants decided to make a classless decision for one of the league’s classiest players.

Words can’t really describe how ignorant and absurd the decision to bench Manning is, because it’s something that shouldn’t even have happened. This is not to say Manning is an elite quarterback. And it’s also not to say that Geno Smith can’t get the job done. (There’s way too much of a focus on Smith by outraged people in this saga. With the Jets, Smith was a young player without a strong supporting cast and might surprise some people with a fresh opportunity. And he happens to be a good fit in Ben McAdoo’s offense.) However, benching your two-time Super Bowl-winning quarterback, who—all things considered—might actually be playing better this season than last, is simply a senseless move.

While the Giants are at 2-9 and might want to give some younger guys the chance to play to see what they have moving forward, Manning is not the player to do that with. Over the last 14 years, Manning has done nothing but set a great example for the Giants franchise and the rest of the NFL. He’s a Walter Payton Man of the Year, he never caused any issues off the field, and he brought championship success back to a proud franchise. Right now, it’s difficult to be seen as a less prideful franchise than the Giants after this heartless decision.

This is about respect and loyalty—something Eli Manning has shown every single day for over 5,000 days since the Giants acquired him back in 2004. Presumably, Giants head coach Ben McAdoo and GM Jerry Reese are both trying to save their jobs. Perhaps they believe picking up some wins with a quarterback that looks good in the system will show ownership they have a recipe to get things back on track next season. In reality, this was the nail-in-the-coffin for the both of them.

Giants ownership shouldn’t get a free pass in this, either. Owners John Mara and Steve Tisch are smart to let the people downstairs make the decisions on who plays and who doesn’t. But they own the team (and gave the “OK” to do this), and in this situation, they could’ve easily stepped in and said “wait, you’re not benching Eli Manning.”

The emotion on Manning’s face when talking about his benching was hard to watch for anyone, but like he has for 14 seasons—probably through injuries and adversity we’ll never hear about, because Eli never makes things about himself or what he’s going through—he was the definition of a true team player. Of course he disagreed with the decision, but, as always, Eli Manning handled the situation with pride and dignity unlike many athletes today would.

Unfortunately, that pride and dignity is not being reciprocated by the Giants.