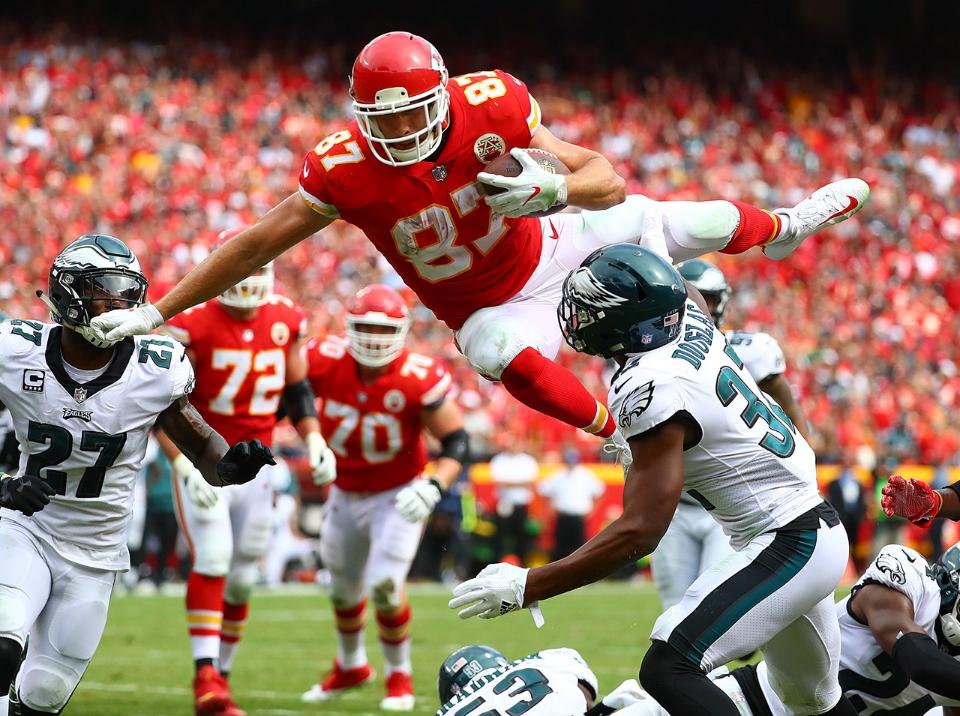 
In a year where there seem to be lots of flawed contenders and almost no truly great teams, the Kansas City Chiefs have stood out from the pack. While presumed offensive powerhouses like the Falcons and Steelers have scuffled and underwhelmed, the Chiefs have rolled through opposing defenses like a squadron of panzer tanks, blitzing their opponents to the tune of 29.5 points per game. Per Football Outsiders, the Chiefs are ranked a comfortable first in offensive efficiency through six weeks with a DVOA of 32.4%. Only the Patriots (who will presumably continue fielding a top-three offense every year until the heat death of the sun) are within 10% of Kansas City’s league-leading mark; the Saints, in third place, are closer to the 13th-ranked Rams than they are to the Chiefs in first. And the Chiefs certainly haven’t been one-dimensional—they are first overall in passing DVOA and second in rushing DVOA, the only team in the NFL that is currently in the top five in both categories.

Where did this come from? The Chiefs weren’t exactly bad on offense last year, but they were hardly a force to be reckoned with—they finished the 2016 season 13th in DVOA, and didn’t add any major pieces to their offense except rookie running back Kareem Hunt. Hunt has been excellent, but that alone doesn’t explain how Kansas City’s previously ho-hum offensive unit has suddenly gone nuclear.

On paper, the Chiefs’ collection of offensive talent isn’t especially threatening. They have nothing resembling a prototype number one wideout; they have doled out over 500 snaps at wide receiver to Tyreek Hill, Albert Wilson and De’Anthony Thomas, three speedy return-man types who all check in at 5’10” or below. Their lead running back is a rookie out of Toledo who fell to the third round. Their offensive line is right around league average—when Pro Football Focus ranked the overall performance of every offensive line in football last week, Kansas City’s group was slotted in at 13th (and that was before their pass protection meltdown against Pittsburgh on Sunday). Their quarterback is Alex Smith, the God of Checkdowns, a thirteen-year veteran who has never finished a season in the top ten in passing yards or touchdowns. Other than star tight end Travis Kelce, Kansas City doesn’t seem to have any of the ingredients necessary to build an elite offensive attack…yet that’s exactly what they’ve done. Somehow, the Chiefs have cooked a well-rounded three course meal out of nothing but spices.

You have to give the Chiefs credit—instead of trying to make their weapons fit into the framework of a conventional NFL offense, they have crafted an offense to fit the unique skill sets of their players. In a copycat league, the Chiefs have had the guts to innovate…and along the way they have become the most unstoppable, and delightfully entertaining, offense in the game. If you are a fan of the NBA, you’ve probably heard the phrase “positionless basketball” used to describe the modern evolution of professional basketball. This concept is personified by last year’s champions, the Golden State Warriors, who played long stretches of the NBA Finals with lineups that featured a swarm of interchangeable wing players and not a single traditional big man. Those lineups were so deadly in part because they weren’t confined to the parameters of a conventional NBA lineup—all five players could switch roles and functions on a whim, and often did. That might be the best way to sum up what the Chiefs are doing on offense this year—lacking conventional weapons at multiple positions, the Chiefs have opted to simply play positionless football. Kareem Hunt, their lead back, has 255 yards receiving through six games, and can often be seen running go routes, deep posts, and an assortment of other routes that go well beyond the safety valve receiver role that most starting running backs play in the passing game; in his NFL debut, he notched a 78-yard touchdown reception on a vertical route out of the backfield. Hill, Thomas and Wilson are often used in packages that deploy them as options (or at least decoys) in the running game, either lining up or motioning into the backfield. Smith is no slouch as a runner either, often keeping the ball himself in read option or inverted veer concepts. And when Travis Kelce isn’t split out in the slot, you can often find him lined up in the backfield—sometimes directly over center, as in this play from their Week 4 tilt against Washington:

Check out the formation there: the Chiefs have four players—ostensibly a tight end (Kelce), a running back (Hunt), a receiver (Hill) and their quarterback—lined up in the backfield in an alignment reminiscent of the Wing-T offense, which has been obsolete in the NFL since before World War II. The action in the backfield revolves around the two players that you’d least expect to be involved—Kelce receives the direct snap and runs what is basically a conventional read option play with Hill, reading the unblocked edge defender to his right before tucking the ball and plunging ahead into the A Gap as Hill holds the Washington rusher’s attention by faking a sweep over the right tackle. In the modern NFL, most teams have at least a couple read option concepts (or plays that mimic the mesh point of a read option, even if they aren’t true option plays) in their offense, so that in itself isn’t exactly innovative—but the Chiefs have taken the option offense to a whole new level with the sheer dizzying variety of deception, pre-snap motion, and exotic packages they have incorporated into their offense. Here is another direct snap play to Kelce, this one from their week one win in New England:

This is a fairly similar play design to the one above, except the read option is replaced by a speed option to the left, with Kelce faking a pitch outside to Hill before running behind the offensive guard on the same side of the play. The key to both of these plays is the threat that Hill represents as a runner—watch the way that Trey Flowers and Patrick Chung both freeze in the above play when Kelce fakes the pitch outside to Hill. That split second that both of them turn their eyes to the outside is more than enough to open up the space that Kelce needs to plunge forward for the first down. Hill is one of the fastest humans on the planet, and every edge defender is well aware that they don’t have a snowball’s chance in hell of running him down if he is able to get to the edge with a head of steam. And when the Chiefs do put the ball in the hands of their human lightning bolt, they’ll usually throw in some additional misdirection to give him extra room to work:

In this play (from Kansas City’s week 2 win over the Eagles), Hill starts out lined up slot right, with fellow offensive Swiss Army knife De’Anthony Thomas in the backfield as the nominal running back next to Smith. The Chiefs send Hill in motion from right to left before the snap, drawing Eagles cornerback Patrick Robinson to shadow him across the formation to the back side of the play, and then Hill reverses back towards the strong side right as the ball is snapped. Smith hands the ball to Hill on the jet sweep and then, practically simultaneously, simulates a read option with De’Anthony Thomas running to the weak side. That extra bit of deception is enough to momentarily freeze Robinson and middle linebacker Nigel Bradham, preventing them from tracking Hill back to the other side of the play as they react to Thomas’ fake. By the time they even figure out who has the ball, Hill has already turned the corner on the far side of the formation.

You can already see all the difficult decisions defenders are faced with as they try to account for Kansas City’s dazzling and unpredictable array of weapons. But Andy Reid and the Chiefs didn’t stop there—like a great pitcher who uses his fastball early in the count to set up the breaking ball later, the Chiefs trotted out a spiced-up variation of this exact same concept on their go ahead touchdown in the fourth quarter of that same game:

Two things grab your attention on this play. First, Travis Kelce is clearly a damn wizard, because human beings are not supposed to be able to levitate. Second, this play is identical in almost every way to the jet sweep to Hill that we just examined—Hill goes in motion from right to left, once again drawing Patrick Robinson across the formation, only to immediately shoot back the other way. This time, Robinson corrected for his previous mistake by following Hill’s motion back to the right in anticipation of the handoff…except the handoff never comes. Instead, Kelce sneaks towards the center of the line to receive the shovel pass from Smith as the Eagles’ front seven is keying on Hill. This would be a tough play to defend against any offense, but it’s even tougher against Kansas City because every single option that is on the table—the sweep to Hill, the handoff to Thomas, or Smith keeping the ball for himself—is something that Kansas City had already used successfully at some point previously in the same game. Watch Patrick Robinson as the play develops—you can almost see the steam leaking out of his ears as his brain melts into a sizzling puddle trying to figure out where the ball is actually going. By the time he has processed all the conflicting information being thrown at him, it is way too late—Kelce is already rapturing his way into the end zone (seriously, is he an airbender or something? That should not have been physically possible).

We all love to make fun of Andy Reid, with his walrus mustache and lack of clock management skills, but it’s plays like this that remind you why he is still one of the most highly regarded offensive minds in the game. Reid is a sorcerer when it comes to Xs and Os, and that has never been more apparent than in 2017, where he has built an unstoppable offensive juggernaut out of a collection of guys that most people would think of as little more than gadget players. We have been told for years that the option offense is a college-ball gimmick that will never succeed in the NFL, because professional defenses are simply too fast and too well coached. As the Chiefs have proved this year, that could not be more wrong. It doesn’t matter how fast a defender is if he has no chance to assess where the play is going until it has already moved past him.

As good as the Chiefs are on offense, they certainly have flaws. As we saw in their loss to Pittsburgh last week, their well-oiled offensive machine starts to break down if they have to spend big chunks of the game playing from behind—when Smith was forced to throw the ball to play catch-up, it ruled out a lot of the exotic rushing concepts that make Kansas City’s offense so efficient and exciting. But in a season where most of the teams in playoff contention appear to have serious, exploitable flaws, the Chiefs have set themselves apart with their innovative and aggressive attack. While the rest of the league is zigging, Andy Reid has zagged—and he may well zag his way to a long-awaited Super Bowl ring.