Home / frontnfl / The NFL Broadcast Angle Is Out Of Date 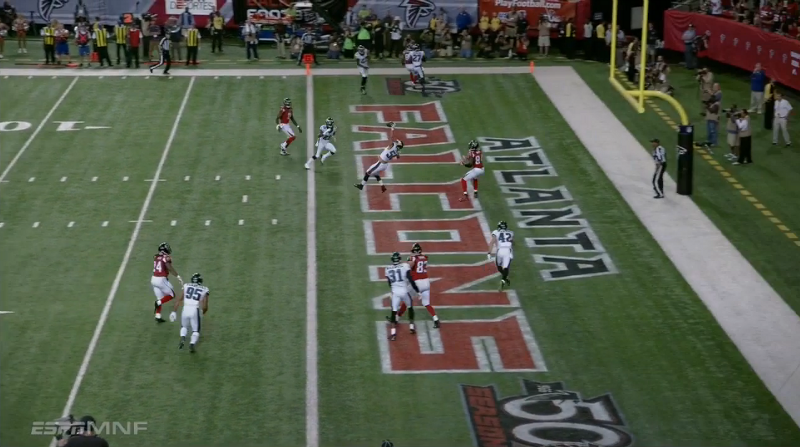 The NFL Broadcast Angle Is Out Of Date


NOTE: This article was originally published on September 1, 2016—when the site was not close to full capacity and we were publishing only articles through the platform Medium—and then last Winter when the current website was getting much closer to 100%. It has been re-published after last night’s fog game between the Falcons and Patriots led to many people praising a different camera angle.

The most popular television show in the United States is by far the NFL. Monday nights, Thursday nights, and Sundays from 1:00 PM EST on (and occasionally Saturday nights) are owned by the NFL. People of all ages love to watch their favorite team (or fantasy team), beloved players, and most-heated rivalries. From Aaron Rodgers throwing a football 60 yards in the air, to Rob Gronkowski dominating and spiking footballs in the end zone, people love to see the spectacular that occurs during NFL games.

In terms of presentation, most fans would think the NFL and the networks broadcasting the games are getting it right; with the amount of people tuning in, it’s hard to argue. However, as good as the television broadcasts are, they can be better.

When watching football, I can’t help but wonder a few things: What are some of the routes the receivers are running? Is no one getting open for the quarterback? Is the quarterback not seeing any wide-open receivers? Are defensive backs getting away with holding or illegal contact? With the current broadcast angle, the viewer really cannot determine any of this.

The camera angle for NFL games is too zoomed in, and should be changed. Before the days of high definition, a zoomed in broadcast was no doubt the best angle for the viewer. Most teams ran the ball a lot more back then compared to today, and many ran compact power offenses. Today, many offenses in the NFL are spread out or at least have some spread component to the offense. Offenses have not only stretched horizontally, but teams also pass more often — we should be able to view these plays better.

The following screenshots are just one example of how the camera angle works. Just watch a game on Sunday, and you’ll notice you have no idea what is going on down the field most of the time. The play starts off fine. You can see almost the whole current area of the field. (Screenshot via NFL Game Pass from an NBC Broadcast.) But then it zooms and you cannot see much of the action. This is the case almost every passing play. (Screenshot via NFL Game Pass from an NBC Broadcast.)

Televisions not only have gotten a much clearer picture over the years—thanks to high-definition—but they also have gotten huge. Today, you can buy a television over 60 inches for well under $1,000 (granted, that might not be as good of a picture as some higher priced televisions, but it is still high-definition and better than any television picture from the 1990’s).

Most people in the U.S. do own high-definition televisions and would benefit from a change in the broadcast angle. There are some people that cannot or have not upgraded to high-definition, but maybe there is something that can be worked out with standard definition broadcasts.

For those with high-definition televisions, this would be a welcome change. Who would not want to see Antonio Brown putting a double move on a defensive back and getting wide open for a big gain in real time? Or Patrick Peterson, play after play, making things extremely difficult for a wide receiver and not giving them any separation?

These things can be shown through instant replay, but imagine sitting on your couch or at the bar and everyone jumping up when they see a receiver break free in the secondary. An updated broadcast angle would make this possible.

ESPN did a great job with their new goal-line camera last year. The angle shows almost every inch of the play. The viewer can see more depth in the play, the route concepts, etc. Week 1, it was on full display when Kiko Alonso intercepted a Matt Ryan pass in the end zone. ESPN’s side endzone camera is a great step towards an updated broadcast angle. (Screenshot via NFL Game Pass from an ESPN Broadcast.)

The depth of the players on the field and defensive players in their zone assignments is much easier to see with this angle. (Screenshot via NFL Game Pass from an ESPN Broadcast.)

Maybe the method of capturing NFL games cannot be changed. However, with the way technology has advanced — and ESPN’s goal-line camera showing there are clearly ways to give a better broadcast angle — there should be a way to get it done.

The NFL should get with FOX, CBS, NBC, and ESPN to determine the best way to broadcast their games. With high-definition and big screen televisions, the current broadcast angle is out of date.