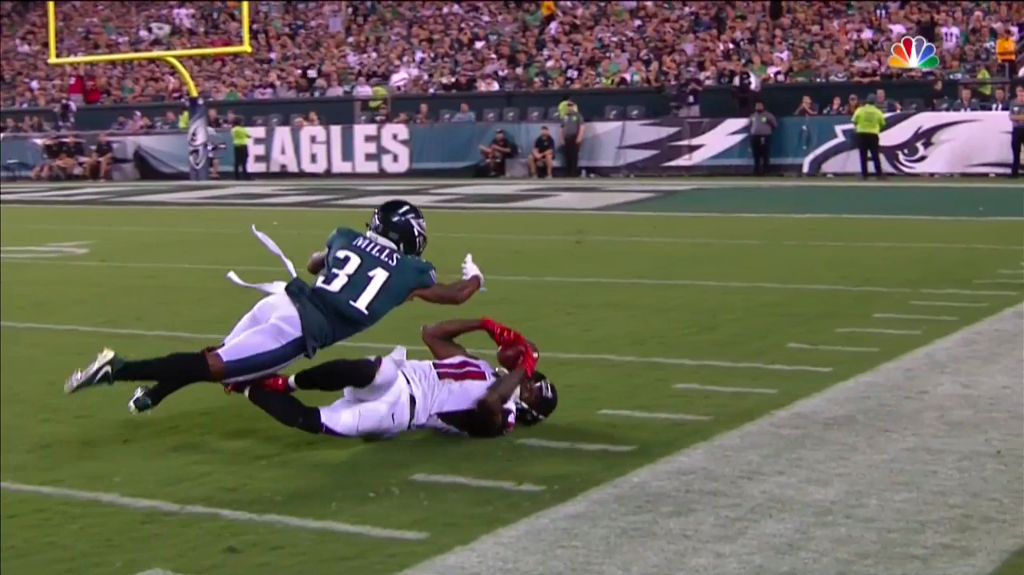 
The NFL season is underway, and we already had plenty of craziness after one game, with a weather delay, plenty of penalties, and uncertainty on the catch rule. The penalties should sort themselves out within the season’s first couple of weeks, but the catch rule appears to be a major problem if last night’s Falcons-Eagles game was any indication.

There were three plays in which the so-called “simplified” catch rule had absolute uncertainty over what was a catch and what was not. The new rule, which was passed in the offseason, defines a catch as:

-Control of the ball

-Two feet down or another body part down

-A football move such as: a third step, reaching/extending for the line-to-gain, or the ability to perform such an act

An issue with the new rule is that the definition for “control of the ball” is suddenly subjective. Before, it was clear: possess the ball through the process of the catch, and it was considered a catch. As Bill Belichick said during the Jesse James non-catch controversy in last year’s Patriots-Steelers game, the catch rule is “very clearly stated.” And as Eli Manning said, “I think [the catch rule] is clear.”

Now, it is not, and last night—just one game—was a prime indication that the NFL created a problem by passing this new rule.

First, there was the Austin Hooper catch that Eagles head coach Doug Pederson challenged, believing it was not a reception.

That does not look like it should have been a catch. The ball is moving as Hooper tries to gain control of it. However, Pederson lost the challenge and drew a lot of criticism for throwing the challenge flag in the first place. The reason he threw the flag is because that obviously did not look like a catch.

Then in the second half, there was the deep ball to Julio Jones down the right sideline—a play that had a huge impact in the game.

It should’ve been a 50-yard gain, as Jones’ entire body was in bounds, he had control of the ball, and the ball didn’t touch the ground. The fact that it was ruled incomplete is mind-boggling. You just look at the play at the right angle and know it’s a catch.

Finally, there was a Mohamed Sanu catch.

After the first two plays were ruled the opposite of what it looked like, I really have no idea on this one, based on the new catch rule.

With the old catch rule, I agreed with Belichick, Manning, and many others: The rule clearly stated what constituted a catch. There must be some clear guidelines for determining big plays in games, and the NFL had that.

Unfortunately, the league caved to pressure from hysterical media members and casual sports fans that loudly voiced their displeasure with the old rule. Because of it, there is now more uncertainty about what an NFL catch is than there ever was.