Home / frontnfl / The Philadelphia Eagles Should Not Trade Nick Foles 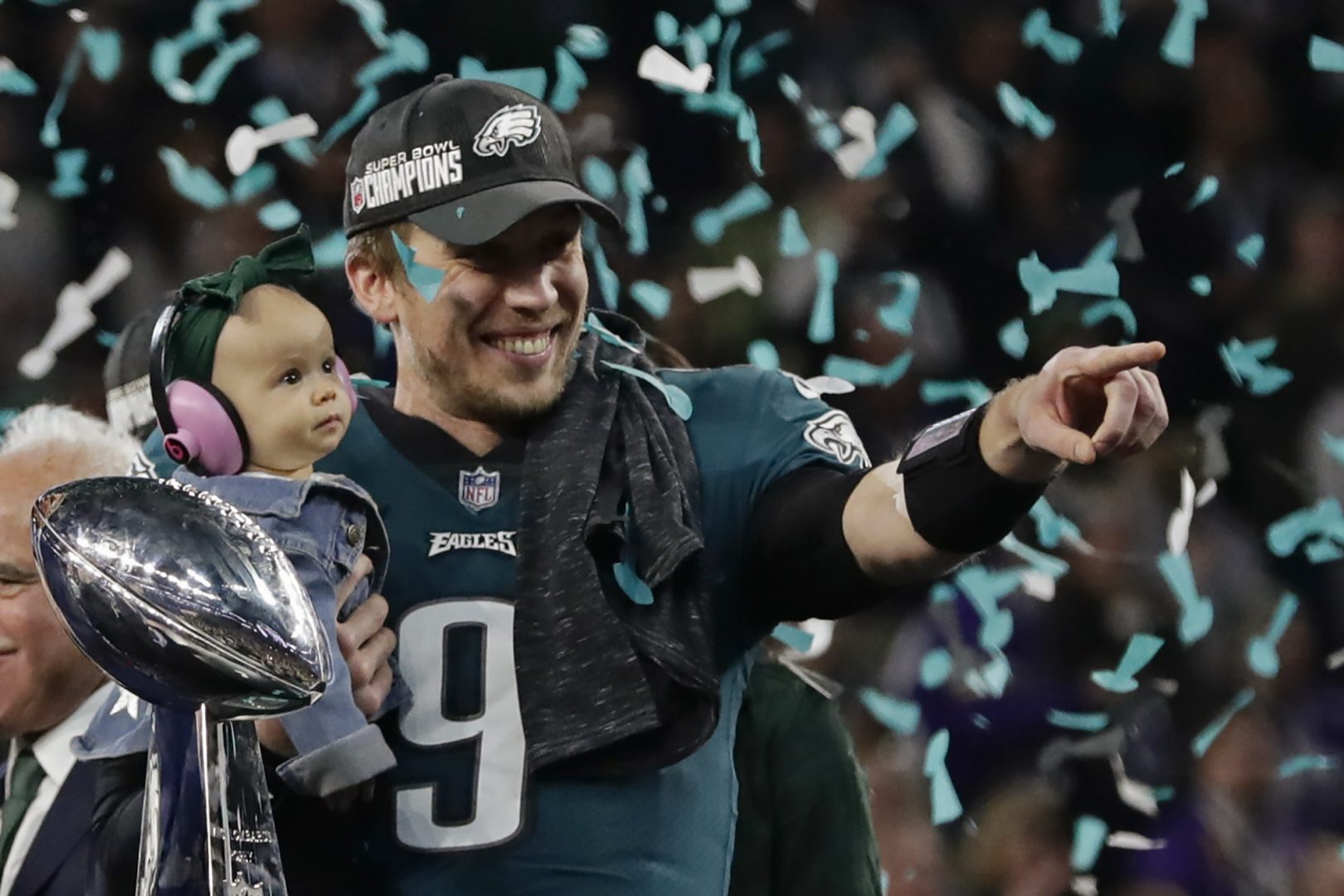 The Philadelphia Eagles Should Not Trade Nick Foles


The talk of the NFL offseason in Philadelphia will be about Super Bowl LII MVP Nick Foles, who led an improbable playoff run that ended in the Eagles defeating the Patriots in the Big Game. People are already talking about whether to trade Foles, pondering the potential return for the 29-year-old quarterback. Despite all the speculation, the solution to this great-issue-to-have is simple: You do not trade Nick Foles unless he really wants to go to another team and demands a trade.

Last week, I named Foles one of the top players in the NFL to build a franchise around, and I truly believe it—the ranking is not just a spur-of-the-moment thing. Foles already had one of the best seasons for a quarterback in Eagles franchise history when he threw 27 touchdowns compared to two interceptions in 2013, and while the offense certainly had a lot to do with it, that doesn’t mean Foles didn’t play extremely well during that time.

Now some are probably arguing Foles is the product of two great offensive coaches, wouldn’t have success in other places, and should be traded while his value is this high (I wouldn’t know, but I am assuming those are the arguments being made on sports radio). Carson Wentz is the franchise quarterback, so Foles isn’t needed right?

Anyone in favor of trading Foles must not understand that backup quarterback is one of the most important positions on an NFL roster. It’s why former Eagles coach Chip Kelly wanted to also keep Foles when he traded for Sam Bradford in 2015. The massive importance of backup quarterback was just on display during the Eagles’ Super Bowl run when Foles stepped in and flame-threw his way to hoisting the Lombardi Trophy. Without him, the Eagles franchise would still be looking for its first Super Bowl.

So why would the team even think about trading their Super Bowl-winning quarterback away unless they are given an ultimate “Godfather offer”? They really shouldn’t be thinking about it at all unless that offer actually comes, or if Foles demands a trade so he can be the franchise quarterback somewhere.

To me, any Nick Foles trade should start with acquiring at least one premium draft pick—say, the fourth overall pick from the Browns. That would just be the starting point, and it might not even work out because I would want to make sure I can get Penn State running back Saquon Barkley with the selection. The reason for this is the state of the Eagles roster.

Philadelphia just won the Super Bowl, and it’s because they have a team that had elite team chemistry and culture. The entire roster contributed because it’s something that had become expected after the roster reset started back in 2015. Of course, you want to add as many good players as you can, but the team is in an ideal situation and is not in a position where they need to reset and build the roster’s foundation again.

Because the roster—as is, even if they lose free agents like Nigel Bradham and LeGarrette Blount—is strong enough to compete for another Super Bowl next year, there is no legitimate reason to trade Foles other than the “Godfather offer” you can’t turn down or a trade demand from the player.

Saquon Barkley is in my opinion the best player in the draft and the best running draft prospect in quite a while, and whatever team gets him should have a blue-chip offensive centerpiece for the next ten years. Anything can happen, but it’s probably safe to say Barkley won’t be a bust, which is why the opportunity to get him would be one of the only ways I would trade Foles. Sure, as a decision-maker you would like to think you do a good enough job to select players that will become big contributors and perhaps All-Pros, so a pick around No. 15 (from Arizona) or No. 21/22 (from Buffalo) could give you the opportunity to get a great player, but the reality is draft picks don’t always work out.

Putting the roster strength aside, Carson Wentz is coming off a serious knee injury that he’s no lock to be 100% recovered from for the start of the 2018 season. The first-place schedule for the Eagles is looking tough, and they will have a target on their back as the defending champs. They might dominate again next season, but there’s also a chance getting a first-round bye, winning the division, or even making the playoffs is a real struggle. Not having Wentz ready to go while having dealt away Foles could put the team in a hole they can’t get out of.

Also, even if Wentz is ready to roll for Week 1 in September, what if he just isn’t the same? Wentz has certainly shown he has top-tier upside as a quarterback and most of us believe he will remain an MVP-caliber player when he’s back on the field, but what if some of Wentz’s magic fades? And with Wentz’s style of play, injuries have to be at least a slight concern for the Eagles. If, perish the thought, Wentz goes down with another injury next year, or if his play suddenly has a major decline from the level he was at in 2017, I think everyone in the building would feel good about Nick Foles taking the reins again. There wouldn’t be a drop-off.

While Foles is entering the last year of his contract, it would be unwise to trade him. He showed first-hand why backup quarterback is one the most important positions on an NFL roster, and the Eagles aren’t in a position where they should trade a great one because they need a bunch of help at other positions.

If you think about it, would a war general that steps in and leads a country to victory be traded for some more war supplies? No way. They would keep that general around as long as they can, even if they have Alexander the Great ready to command the army. Foles is a legend in Philadelphia, and no one is going to mind if he sticks around for another year instead of having a potential first- or second-round draft pick for him.

This time next year, there wouldn’t be any regret by holding on to Nick Foles. But there certainly would be if you got rid of him and could have used him for another Super Bowl run. It wouldn’t be a case of being afraid to make a big splash move—it would simply be making the wise and rational decision.