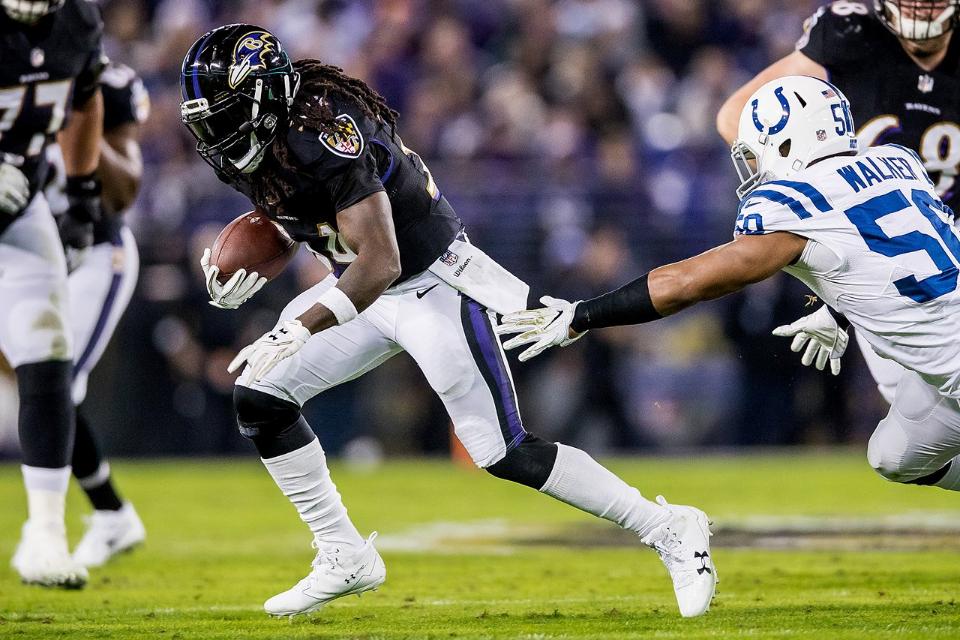 
With one week to go in the NFL season, the playoff picture is starting to come more clearly into focus. Only one division race—the NFC South—is still undecided, and the Eagles, Patriots, and Steelers have all clinched top-two seeds and the Wild Card Round off-day that comes with them. And while those teams (other than the Eagles—RIP, Carson Wentz’s MVP candidacy) are clearly the class of their respective conferences, it’s too early to pencil them in for a spot in the conference championships. If there’s one thing we can all agree on, it’s that specific matchups often matter much more than overall team quality, particularly in the high-stakes madness of a single elimination playoff tournament. So, as we get ready for the (highly condensed) final week of the regular season, let’s run through the top teams in each conference and pick out which matchup they should be praying that they avoid come the postseason, starting today with the AFC.

Team they should fear: Jacksonville Jaguars

Things are looking pretty rosy right now for the defending champions. After eking out a controversial victory against the Steelers in Pittsburgh, the Patriots now sit in pole position in the AFC playoff chase; as long as they beat the Jets at home in Week 17 (and I’m going to go out on a limb and predict that they will), they will once again have home field advantage throughout the playoffs. A trip to Foxboro has been the most daunting playoff matchup in the AFC for fifteen years and counting, but there is a way to beat Brady and Co., and it starts at the line of scrimmage—in all of the Patriots’ recent playoff losses, the common denominator has been pass pressure. Brady struggles to handle a constant pass rush, but he reads defenses so well that sending extra rushers frequently is basically a death sentence—he will find the spot that is left exposed in coverage and make the defense pay. To beat the Patriots, a defense has to be able to generate consistent pressure from their front four alone.

No team is better equipped to do that than the Jacksonville Jaguars. #Sacksonville has been a meat grinder for quarterbacks this year, pressuring opposing passers at a 33.9% clip (best among all playoff squads) on the way to racking up a league-leading 52 sacks. Crucially, they have been able to generate all that pressure without blitzing very often, thanks to a deep stable of pass rushers including Calais Campbell, Yannick Ngakoue, Dante Fowler Jr. and Malik Jackson. The Jaguars defense also leads the league in DVOA against deep passes (throws of 16 yards or more, by the NFL’s definition) by a substantial margin, so the field-stretching deep balls to Brandin Cooks and Rob Gronkowski that have been key in some of New England’s biggest wins this season would be hard to come by in this matchup. Throw in New England’s awful run defense (the worst in football, according to DVOA) going up against Leonard Fournette, and it isn’t hard to imagine the gameplan Jacksonville could concoct to beat New England: chew up the clock with a smashmouth running game, and lean on their deep stable of pass rushers to keep Brady from getting comfortable in the pocket.

It feels weird to say that a defense should be confident against Tom Brady but afraid to face Alex Smith, but bear with me. We’ve already talked about Jacksonville’s pass defense, but the flipside of that is that they haven’t been very good against the run—the Jaguars rush defense ranks just 29th in DVOA. That would be bad news against the Chiefs, who run one of the most balanced offenses in football, paced by the league’s fifth-ranked rushing attack by DVOA. Rookie wunderkind Kareem Hunt has been a large part of that success, but much of it can also be attributed to the dazzling variety of packages, fakes and play concepts built into Kansas City’s offense. And it’s exactly that variety that would present the biggest problem for the Jaguars’ defense.

In Andy Reid’s offense, even basic play concepts are spiced up with exotic formations, pre-snap motion and/or multiple playfakes, all designed to freeze edge defenders while they spend crucial moments sorting through the conflicting information being thrown at them. That sort of trickery can completely neutralize even the best pass rushers—as unblockable as the Jaguars front four seems at times, they would be forced to exercise caution to avoid overpursuing on the jet sweeps, screens and shovel passes that Kansas City frequently works into their offense. And when the Chiefs do throw the football, that brief moment of indecision from the pass rushers is usually more than enough for Alex Smith, who almost never holds the ball for more than two or three seconds. Smith gets knocked around a lot for his reliance on short throws, but that would be a point in his favor in this matchup. The Jaguars defend the deep ball better than anyone, but that won’t be very helpful against Kansas City; just 18.6% of Smith’s throws this season have travelled more than 15 yards down the field.

The good news for Jacksonville is that, because the Jaguars and Chiefs are already locked into the third and fourth seeds, this isn’t a particularly likely pairing—it could only happen in the AFC Championship, and in that case, only if the Steelers and Patriots both lost at home in the divisional round.

Team they should fear: Pittsburgh Steelers

The Chiefs already have good reason to fear Pittsburgh, since the Steelers ended Kansas City’s undefeated season back in Week 6 with a 19-13 win in Kansas City. That game was a microcosm of all the problems Kansas City would face in this matchup, starting in the backfield with Kareem Hunt, who was held to just 21 yards rushing. The Steelers were able to take away Kansas City’s running game early, forcing them to abandon a lot of their razzle-dazzle offensive concepts and adopt a more straightforward, pass-heavy approach that doesn’t really suit their offense. The results weren’t pretty—without the threat of a dynamic run game, the Steelers pass rushers were free to tee off on Smith, and the Chiefs were held to just 253 yards of offense, their second lowest total of the season. Kansas City’s offense depends on balance, and the Steelers defense is well constructed to take that away.

On the other side of the ball, there’s LeVeon Bell, who ran wild over Kansas City in that Week 6 matchup to the tune of 184 yards on 32 carries. The Chiefs have struggled against the run all season—only New England has a worse rush defense by DVOA—and their linebackers just aren’t fast and rangy enough to hang with Bell’s trademark on-a-dime cutbacks. And just to make things more fun for Kansas City, the Chiefs defense is dead last in DVOA against number one receivers this season. It’s unknown at this point if Antonio Brown will be healthy for the postseason, but even if he isn’t, Martavis Bryant is more than capable of pouring gasoline all over Kansas City’s overmatched cornerbacks and dropping a match on the pile.

Team they should fear: Baltimore Ravens

And on the other side of the coin there’s Baltimore, whose defense has absolutely smothered opposing receivers all season. The Ravens are fourth in DVOA against number one receivers and tops in the league against number two receivers. Although they were torched by Brown in their most recent meeting, they actually handed him his worst full game of the season back in Week 4, holding Pittsburgh’s world-beating receiver to just 34 yards on four catches (Brown posted worse numbers in the Steelers’ loss to New England, but he left that game in the first half with the calf injury that has sidelined him ever since.) There’s no guarantee Brown will be back for the playoffs, and even if he is, it’s unlikely that he will be in top form. Either way, the Ravens have the tools to make things exceedingly difficult for Pittsburgh’s usually dominant receiving corps.

Pittsburgh fans might be raising their eyes at this pick, given that the Steelers swept Baltimore in two regular season meetings this year, but if I was a Terrible Towel owner I’d be nervous about a third meeting with their bitter AFC North rivals for a number of reasons. In addition to their success against wide receivers, the Ravens boast a stout front seven anchored by C.J. Mosley and Brandon Williams (one of the most underrated players in football) that is more than capable of containing Le’Veon Bell, who was held to just 48 yards on 13 carries in their most recent matchup. And on the other side of the ball, the Steelers had serious issues against Alex Collins and the resurgent Ravens running game; the Ravens spent much of that game lining up in the offset I and feeding Collins the ball on outside running plays, and the Steelers’ Ryan Shazier-less linebacking corps didn’t have the range to contain him when he got to the edge.

One final reason for the Steelers to be worried: interceptions. Picks have been a problem for Ben Roethlisberger this season—he’s belched up fourteen interceptions, trailing only Marcus Mariota and the incomparable DeShone Kizer for the NFL lead. That statistic ought to have a Baltimore defense that led the league with 22 picks salivating.

Obviously, no team really wants to have a road game in New England on their playoff schedule—even Jacksonville would be happier facing the Steelers or Titans. However, the Ravens should be particularly afraid of going up against the Patriots, and not just because of the disparity in their win-loss records.

At first glance, it seems like Baltimore might be decently equipped to deal with New England’s nuclear-powered offense—after all, their defense is leading the league in DVOA with one week remaining in the season. But there are a few reasons to believe that Baltimore wouldn’t be able to sustain their impressive defensive performance against Brady and Co. Much of Baltimore’s success has stemmed from their ability to create turnovers—their 22 interceptions and 33 total takeaways are both tops in the NFL. Those turnovers will be hard to come by against the Patriots, who have turned the ball over just 12 times all season, the second lowest total of any offense in football. The Ravens don’t have an especially dominant pass rush. Their 7.1% sack rate is tenth in the league, but that ranking is a little deceiving—-they are as close to the 29th-ranked Chiefs as they are to the Jaguars in first. And most worrisome of all, their pass defense has struggled against one position in particular—they rank 30th in DVOA against opposing tight ends. That might be a bit of a problem against New England, whose tight end is a guy named Rob Gronkowski. As you may or may not be aware, Gronkowski is pretty good—he leads all tight ends this season with 335 DYAR (defense-adjusted yards above replacement,) which is 142 more than his closest competitor, Travis Kelce. Two weeks ago, Gronk absolutely dominated a Pittsburgh defense that has posted the best DVOA against tight ends of any team in football this year—just imagine what he might do against a Baltimore squad that has struggled mightily against tight ends who are from this planet. As good as the Ravens defense has been, this would be an absolute nightmare matchup for them.