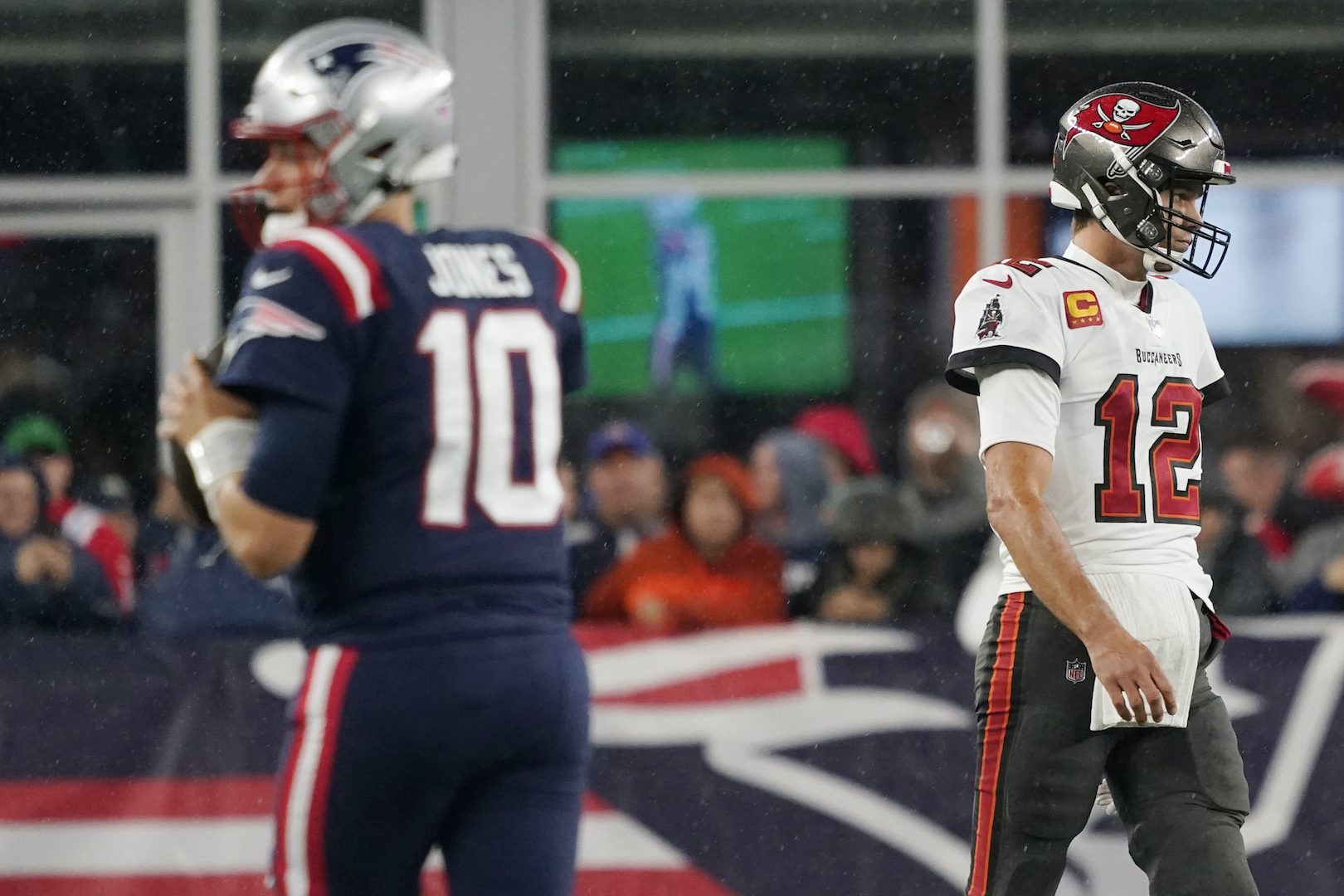 The Post-Brady Patriots Are Quietly Building Another Potential Juggernaut


The New England Patriots were at somewhat of a crossroads a couple of offseasons ago when legendary quarterback Tom Brady left the franchise after 20 years to play for the Tampa Bay Buccaneers. There were always going to be some growing pains in the adjustment to life without the greatest football player of all-time leading the team, and the Patriots probably didn’t think he’d ever play elsewhere. Suddenly, Bill Belichick and company were forced to reload in a conference that includes young superstar quarterbacks like Patrick Mahomes and Josh Allen.

2019 was a down year—the Patriots’ worst (7-9 record) since Belichick’s first year with the franchise (5-11 record). Former league MVP Cam Newton was brought in as the starting quarterback, but it was a tough situation complicated further by the COVID-19 pandemic, which make things even more difficult given the decrease in activity leading up to the season—and Newton then missed critical time in middle of the season due to COVID protocols. That offseason was a bit of a band-aid type of deal, and the margin for error became very small; the Patriots ultimately missed the postseason for the first time since 2008 (when they went 11-5).

The 2020 offseason was the opportunity for the Patriots to get back on track with huge upgrades to the roster. In an uncommon free-agency period, the Patriots spent big to add more talent, particularly to boost an offense that needed more “juice” to compete. Hunter Henry and Jonnu Smith were each given big contracts at tight end; Nelson Agholor, who killed Belichick’s defense in Super Bowl LII, got what many considered a surprising contract (though I think Agholor is very talented and was a good signing); and Kendrick Bourne was an underrated addition to the receiving corps after playing a very solid four seasons with the 49ers. On defense, outside linebacker Matt Judon was the top addition.

The draft is where the real home runs took place. Belichick and the Patriots get some criticism for their draft moves, but they deserve praise for how they’ve handled it over the past few years.

In 2020, second-round safety Kyle Dugger has become a do-it-all weapon at defensive back. The small-school safety (he played at Lenoir-Rhyne) recorded 92 tackles and four interceptions last season. Fellow second-rounder Josh Uche has shown flashes off the edge, and he could be due for a jump in production entering Year 3 with New England. And the Pats found versatile starting offensive lineman Michael Onwenu in the sixth round that year.

But the 2021 draft class—paired with the highly aggressive offseason of spending—is when you could feel things were going to be all right in Foxboro.

The Patriots calmly waited for Alabama quarterback Mac Jones, who was clearly worth a top-five or top-ten pick, to fall into their laps at No. 15 overall. Replacing Tom Brady is impossible, but the Patriots now had a franchise quarterback—and one that could run the offense similarly to the way Brady did, winning with his mind and from the pocket with precise throws all over the field.

Next, the Patriots were able to get Alabama defensive tackle Christian Barmore—who easily could have been the selection at No. 15 and no one would have blinked—in the second round at No. 38 overall. Later, the Patriots saw something in Oklahoma running back Rhamondre Stevenson, a naturally powerful runner that altered his body type since entering the league and now looks like a major factor both in the run game and as a receiver out of the backfield.

Jones in particular is the catalyst. He was so good as a rookie last summer in a quarterback competition with Cam Newton that he became the Week 1 starter. Jones immediately looked like a veteran quarterback in many cases. If you just look at the statistics (67.6% completion, 3,801 passing yards, 22 passing touchdowns, 13 interceptions)—as many people do without actually watching these guys play—you might not think it was anything special.

Those that paid attention know that Jones looks like the real deal after one NFL season. The outing against the Browns—again the stats weren’t super impressive with just 198 yards (though he was 19/23 and threw three touchdowns)—was a prime example of his exciting upside. Jones made deadly pinpoint passes that I remember were jaw-dropping while watching live.

As a rookie, Jones wasn’t tasked with putting the team on his shoulders much, but he has the ability and capacity to handle more of a volume passing attack when called upon. Belichick says his pupil made “tremendous strides” and is much further along than he was last year—a sign that more could be put on his plate in 2022 and beyond. Everyone with the Patriots has the utmost praise for their quarterback.

Back to everyone else from the 2021 offseason, Christian Barmore can wreck games and develop into one of the most disruptive defensive linemen in football, as he was on the interior with the Crimson Tide. I touched on Stevenson being an impressive running back that doesn’t need to leave the field, which can help in no-huddle situations.

Nelson Agholor sounds ready to make a leap in his second season in Foxboro, and Belichick seems to agree. Agholor can both stretch the field with top-ten speed and work as a reliable underneath-to-intermediate target (as he did in that Super Bowl win over the Patriots). Kendrick Bourne was already an extremely efficient target of Jones last season, with a 137.8 passer rating when targeted.

Hunter Henry immediately produced as a reliable tight end target for New England last season, and the versatile Jonnu Smith is another guy looking to make a Year 2 leap in the organization.

Topping the 2021 offseason will be difficult, but the Patriots had another impressive offseason this year. The acquisition of former Dolphins first-round receiver DeVante Parker gives the Patriots more size and a key red-zone target for Jones on the outside. Parker is said to be lighting it up early in training camp, and the Patriots suddenly have a very deep receiving corps that might be difficult to distribute playing time to considering the presence of Jakobi Meyers along with Parker, Agholor, and Bourne.

In this year’s draft, the first-round selection of offensive lineman Cole Strange was one of the stunners of all seven rounds, but he’s expected to immediately slot in at left guard and might prove people wrong down the line. There have been many comparisons between Strange and former Patriots stalwart Logan Mankins.

I mentioned “juice” for the offense earlier, and second-rounder Tyquan Thornton—with his blazing speed—will certainly bring that. He should be able to stretch the defense at the very least.

New England’s third and fourth picks of the draft—cornerbacks Marcus Jones and Jack Jones—will push for playing time in a competitive group that should lead to solid play to paid with a stout front seven led by Judon and Barmore.

Overall, the difference in the Patriots’ roster from right after Brady left to now is astounding. More work is to be done—and coaching and player development is a big part of that work—especially with Josh Allen and the Bills in the division. And looking at things long-term, Belichick’s age (70) must be taken into account.

It’s obviously highly unlikely that they win six Super Bowls, as having arguably the greatest coach and quarterback together for two decades was a rare scenario that led to a sports dynasty the like of which we might not see again in the age of salary caps and ultra-parity. But can the Patriots put together another run to make it a 30- or 40-year stretch of making the playoffs and being a contender virtually every season, while adding more potential championships?

After Brady left the franchise, it would be quite the feat to sustain excellence even close to the level from the Brady/Belichick run. We saw what happened to the Chicago Bulls when Michael Jordan left after six championships. The Broncos have had a tough time since Peyton Manning retired. Professional sports franchises typically go through down cycles, but the Patriots might again be an exception.

It helps to still have Belichick and elite ownership in Robert Kraft and the Kraft family. And I now think they have the quarterback and roster foundation to be that exception. Winning Super Bowl titles won’t be easy, but the Patriots can remain a premier NFL franchise that extends their dynastic stretch another decade or two.