Home / frontnfl / The Return Of Jon Gruden: Do Not Bet Against The Super Bowl-Winning Coach 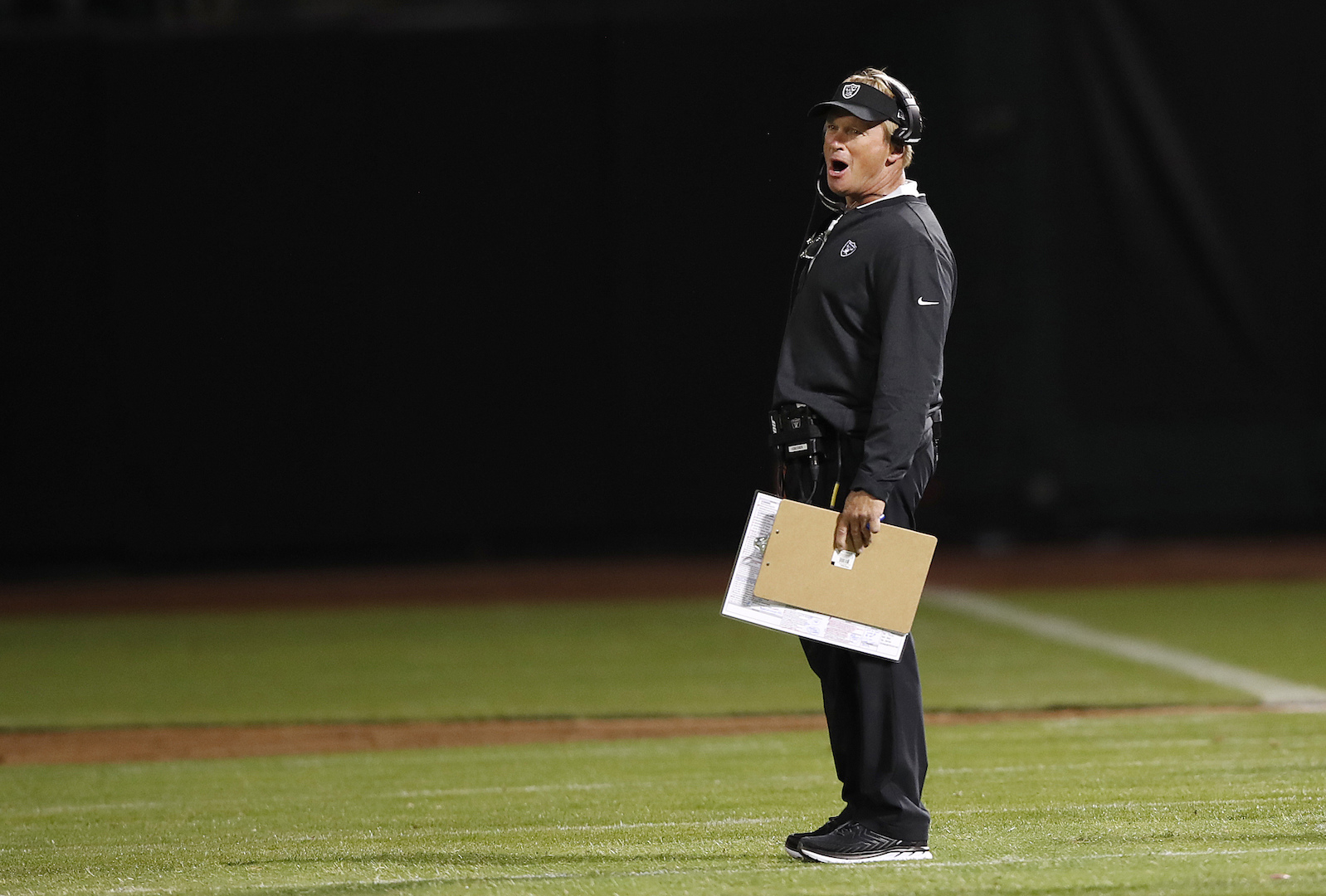 The Return Of Jon Gruden: Do Not Bet Against The Super Bowl-Winning Coach


This fall, Jon Gruden will return to the sidelines for his first regular season NFL game since 2008, when he lost to his former and now-current team in his final time leading the Buccaneers. As Gruden returns after nine seasons on Monday Night Football, again donning the Silver and Black, he’s one of the most talked-about stories in football entering the 2018 season.

For some, his return is controversial. Many of the “experts” claim the game has bypassed the former energetic and hungry assistant coach nicknamed “Chucky”.

However, while time has passed, that’s probably about all that’s changed for Jon Gruden. Listen to him talk one time and you’ll know the energy and hunger is still there after three decades of coaching.

Gruden is what is known as a football lifer. Probably just about every coach in the NFL and college is committed to the game, but Gruden seems to be in another class with guys like (among others) Bill Belichick, Nick Saban, and Chip Kelly, all of whom probably don’t care for many extracurricular activates outside of football. Some people throw around the term “football guy” like a joke, but it’s no joke when it comes to guys like Gruden. It’s legit.

A legendary and tireless worker, Gruden is known for his very early mornings, rising at around 3:00 or 4:00 AM to put in work at the facility. Clearly, his mind is constantly moving and thinking a lot about football, and his level of commitment is what has made him a great coach. During his nine years in the broadcast booth, Gruden would still get up early and put in work watching film and studying the game, probably outworking the majority of coaches—and outworking himself in some ways.

Sure, Gruden had a job to do on Monday nights, but he didn’t show that level of commitment just so he would do an outstanding job on television (which he did). Everything he’s done for the past near-decade was in preparation for this moment.

The term “Gruden Grinder” didn’t come about by accident. Gruden wants guys that are going to grind every single day. Guys that love football. If you look at the success of the Patriots, their culture of winning stems from their commitment to be great. Having someone like Tom Brady leading the way as a player helps, but the Raiders might have someone that can be that guy in franchise quarterback Derek Carr, who is apparently meshing well with Gruden; if nothing else, Gruden is going to push Carr to the limit.

The Raiders have the trademarked Al Davis slogan “Commitment to Excellence”. The slogan really exemplifies Gruden, who is about as committed to coaching football as almost anyone is committed to anything. Those long hours watching film and grinding probably weren’t just some hobby to kill the time. Gruden is a successful Super Bowl-winning coach that could happily retire and relax for the rest of his life if he wanted to—he wouldn’t be returning to the sidelines if he didn’t think he could win.

Despite this, people (mostly media members) really think they know more about football and can do a better job than Gruden will. I am not sure why. It’s hard not to like Gruden’s passion for football and improvement. He wants himself, his staff, and his players to be the best they can be, which is directly applicable to life for mostly everyone.

My guess is the price tag for Gruden’s return is causing some sourness in the media. People are so jealous Gruden is getting $100 million, and they probably believe they would be a better coach for a fraction of the cost—which is laughable.

Some are criticizing the team’s moves this offseason, as they added veteran talent like Jordy Nelson, Doug Martin, Derrick Johnson, and Leon Hall. They might all be past their prime, but they will deliver excellent leadership at the very least—and I would not count out a few of them making a big impact on the field. These guys have all made NFL All-Pro teams in their careers, so they’ll show the younger guys what it takes to be a real pro.

I was surprised at some of the moves the Raiders made during the draft—including trading for immensely-talented-but-sometimes-troubled receiver Martavis Bryant and drafting skilled pass rusher Arden Key in the third round—because Gruden wants players that are fully committed to football and being great. But Gruden and the coaching staff are going to make everyone earn their role; if it doesn’t work out, they either won’t play or will be off the team entirely.

The addition of veteran leadership (like Nelson, Martin, Johnson, and Hall) is important for setting an example the other players on the roster—like Bryant and Key—can follow. People can condemn the moves if they want, but the veterans should have a positive impact that might not necessarily reflect in the box score.

Those that are criticizing Gruden in terms of his pure coaching ability, well, they’ll probably be proven wrong. It might not happen in Year 1, but Gruden was brought back to Oakland to right the ship and get the franchise back to competing deep in January and into February.

I don’t think anyone has a clear idea of what Gruden’s offense is going to look like exactly. I believe he’s going to want to run the ball well and set the tone, but Gruden is a quarterback guru that should get a lot out of his franchise player Carr, who he wants to be a CEO-type of quarterback that’s basically an extension of the head coach on the field.

After nine years away from coaching, looking at the game from a different perspective while picking up things from different teams and coaches he’s visited along the way, I just know it’s going to be exciting—especially when you consider he already had highly-esteemed offensive prowess. Football fans should be pumped to see Gruden leading an NFL franchise.

Jon Gruden might not win another Super Bowl, and maybe he never takes the Raiders to the next level—sometimes things just don’t work out. But there is no doubt he’s fully prepared to do a heck of a job coaching his team for as long as he does it.