Home / frontnfl / The Seahawks Are Looking At A Potential Precipitous Decline 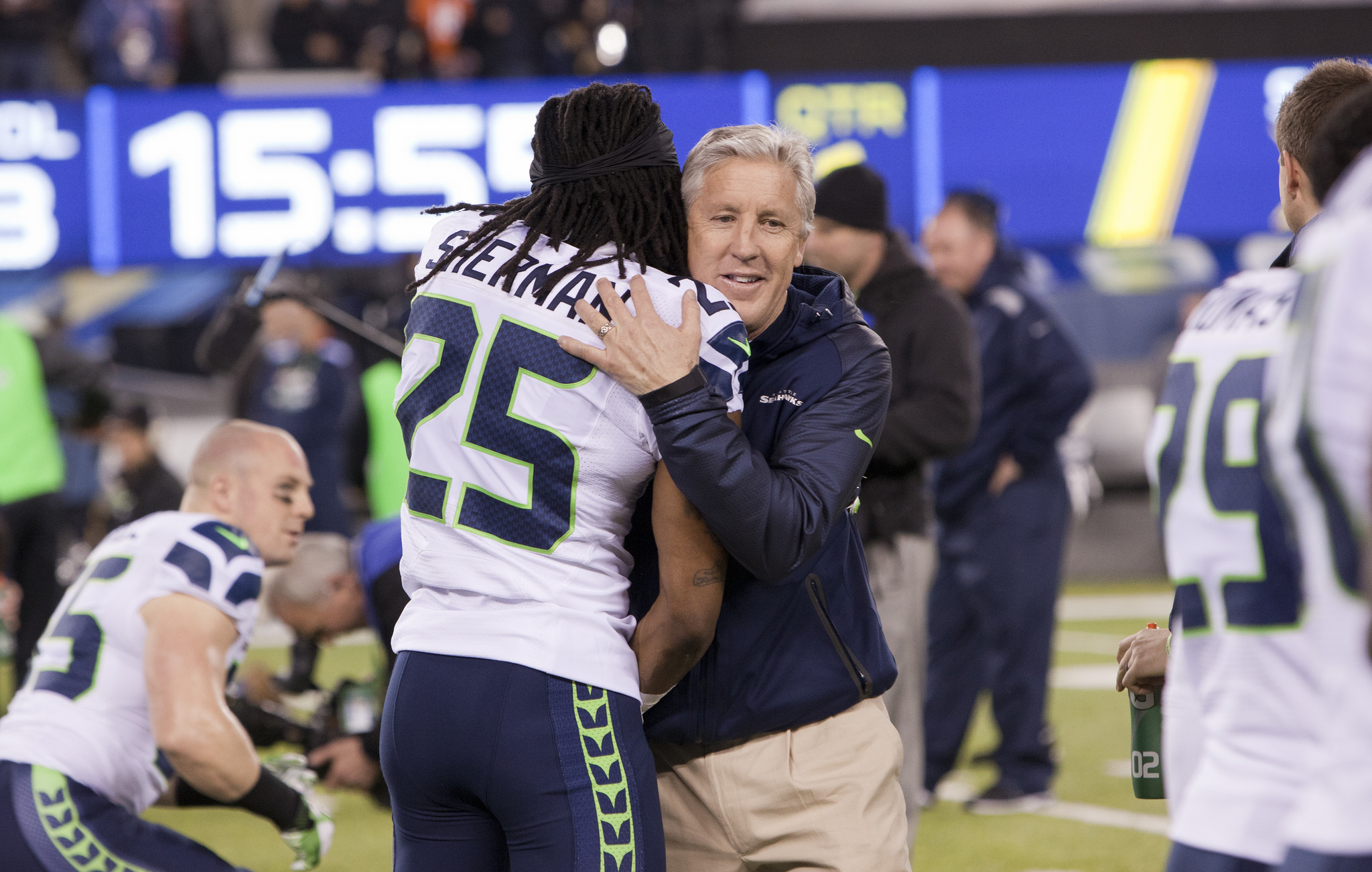 The Seahawks Are Looking At A Potential Precipitous Decline

The Seattle Seahawks have been among the NFL’s elite since 2012. They’ve been to the playoffs all five seasons, including two Super Bowl appearances and a Super Bowl victory in a blowout win over the Broncos—one of the most dominant wins in Super Bowl history.

But is their run coming to an end?

Pete Carroll has done an excellent job since taking the head coach job with Seattle in 2010 and deserves a ton of credit for bringing the franchise its first Super Bowl title. Under his leadership, the Seahawks’ defense was number one in points allowed for four straight seasons—from 2012-2015. The offense finished in the top ten all four of those seasons.

Last season, they finished third in the NFL in scoring defense, and 18th in scoring offense. And now, there’s some big-time drama. Anyone that’s been observing during Caroll’s tenure with the Seahawks knows that he lets the players be themselves. Guys on the team will basically act however they want, not hiding their personalities, as different as they may be. Things are off the rails, at this point, however.

All-Pro cornerback Richard Sherman was very vocal and critical to a point that’s toxic. When the Seahawks passed from the one-yard line against the Rams on a Thursday night game last season, the pass was intercepted but overturned—and Sherman made it clear he didn’t like that decision, yelling on the sidelines at either Carroll or offensive coordinator Darrell Bevell. After the game, Sherman didn’t hold back:

“I’m upset about us throwing from the one… I’d rather do what most teams would do and make a conscientious decision to run the ball.” […]

Yeah, I was letting [Carroll] know: we’ve already seen how that goes. We’ve seen that—I’m sure you guys have seen that play many times.

Wow. Of course, Sherman was referring to the Super Bowl XLIX interception by Malcolm Butler to seal the game for New England. First, let’s get this out of the way: The play call by the Seahawks was not terrible, despite what most people claim. I will explain later this week or the next.

However, Sherman obviously believes it was such a bad decision that it still needs to be talked about two years later. It’s great that Sherman cares enough to give his opinion; he’s not someone that “fake” cares about the game—he really wants to win. But at some point, you have to move on.

Open bitterness and animosity towards your coaches is not good. Also, how does that make Russell Wilson feel? Oh, he’s not good enough to throw the ball without turning it over? Wilson is one of the best quarterbacks in the NFL. He makes the right play and rarely turns it over. Hearing one of the best players on the team (Sherman) being against you throwing the ball can’t help team chemistry.

The Seahawks won their division last season at 10-5-1, but they didn’t feel like serious Super Bowl contenders, despite their history, at any point last season. And after the season, Sherman was suddenly on the trade block. There was such openness about the situation, with Pete Caroll and GM John Schneider being very clear about their top corner being available that it was almost shocking.

While it looks like Sherman will be back with the Seahawks this season after no trade has gone down, it’s hard to believe things will be “all good.”

Things might hold together as long as the team is winning, but what happens if things even start to go south? The Seahawks don’t have an easy opening schedule, with three of their first four games coming @ Green Bay, @ Tennessee, and vs. Indianapolis. What if the defense gets torched by Rodgers, Mariota, and Luck? Given the history, it’s hard to see Sherman holding in his frustration if the team isn’t doing well.

There should also be an improvement in the division. The Cardinals are looking to bounce back after their down 2016, while the Rams always play Seattle tough and look to be on the upswing with new head coach Sean McVay and new defensive coordinator Wade Phillips.

In the rest of the conference, the Falcons will almost certainly be back among the NFL’s elite; and there are other perennial contenders like the Packers, along with up-and-coming teams like the Bucs. Meanwhile, the Seahawks, with their controversy, seem to be trending backwards.

It’s hard to believe a team having issues like the Seahawks appear to have is a good thing. However you take the ESPN report, it’s clear there is at least some discomfort between Sherman and the team. Perhaps they can overcome it all and be contenders in the NFC. Maybe they can even go on another great run to Super Bowl title.

For now, I just wouldn’t bet on it.