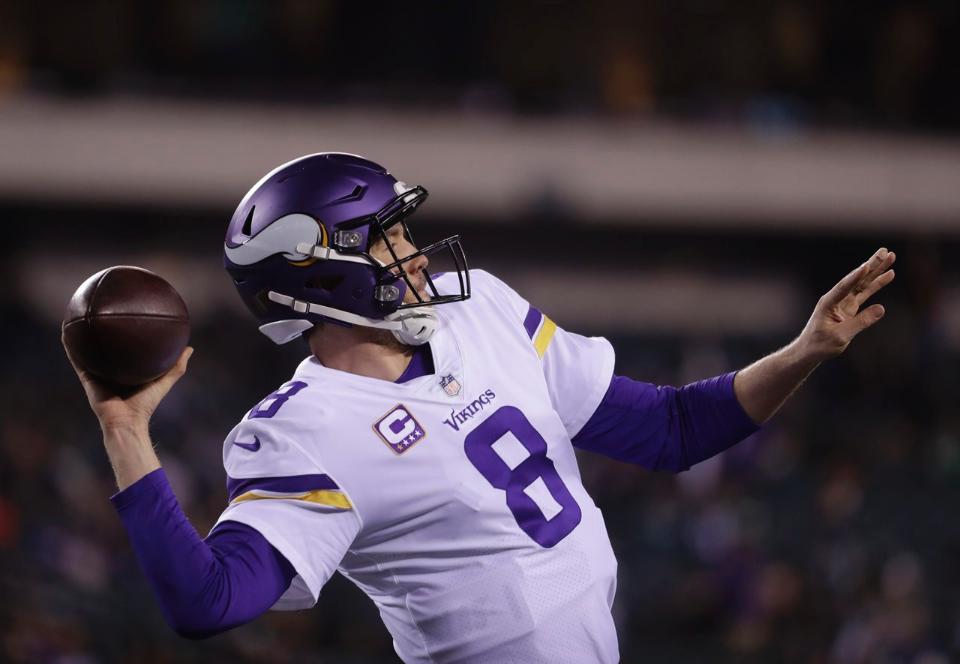 The Vikings Have A Big Decision To Make At Quarterback


They say if you have two quarterbacks you really have none. But what if you have three quarterbacks? The Minnesota Vikings had their season end in unspectacular fashion with a 38-7 blowout in Philadelphia with the NFC Championship on the line, so now they must look ahead to next year, and the biggest decision they will make in the offseason is what to do at the quarterback position.

This situation unprecedented, as Case Keenum, Sam Bradford, and Teddy Bridgewater are all unquestioned starting quarterbacks, all are now healthy, and all are set to hit free agency. Also, the Vikings could decide to go in a completely different direction with Alex Smith, Kirk Cousins, and even Drew Brees potentially available, plus as many as five different signal-callers—Josh Allen, Lamar Jackson, Sam Darnold, Josh Rosen, and Mason Rudolph—are worthy of a first-round pick in April’s draft in my opinion. I think their best option is already on the roster, though.

Case Keenum had a phenomenal season in 2017, completing 67.7% of his passes for 3,547 yards, 22 touchdowns, and seven interceptions in 14 starts (11-3 record), and he was able to lead the team to a playoff victory with an unforgettable finish against New Orleans in the Divisional Round. Overall, the soon-to-be 30-year-old did a great job in Pat Shurmur’s offense by hitting the open man and making plays with his feet both inside and outside of the pocket, which should lead to a big pay day very soon.

That said, Sam Bradford is the best option for a franchise with Super Bowl aspirations, and they seem to know that. Had it not been for Keenum flat-out earning the right to start in the postseason, I think the Vikings probably would have gone with Bradford under center this month, because as Tom Brady has shown time and time again, it’s a passing league, and you need to be able to move the ball through the air in the postseason.

Sam Bradford hasn’t gotten a chance to show it in January, but not many are better pure passers than the former first-overall pick. Why do you think the team refused to rule him out for the season in the midst of an amazing campaign by Case Keenum? And why do you think they made Teddy Bridgewater—who the team loves—inactive for “Sammy Sleeves” in the playoffs?

Anyone who listened to the FOX broadcast in Minnesota’s win over the Saints knows that, according to Troy Aikman, head coach Mike Zimmer said he would probably go to Bradford if the team falls behind by two touchdowns. I thought there was a decent chance they put Bradford in after Keenum tossed up an interception to safety Marcus Williams that allowed New Orleans to climb back into the game, but as we ended up seeing in the NFC Championship Game, the starter had a long leash based on his regular season play combined with the miraculous touchdown to Stefon Diggs in the postseason victory over the Saints.

Bradford gets a bad reputation for sitting out OTAs two years ago with the Eagles, but ignorance is bliss, I guess. If people would just think about things with an open mind, they might realize that Bradford—then a free agent—would have never re-signed with Philly if he knew they would trade up double-digit spots to draft a quarterback with the second-overall pick. Since then, despite a record-breaking season under two different offensive coordinators with little time to get to know his teammates, there’s been an unfair narrative about Bradford. But unlike media headlines, the tape doesn’t lie.

That was the lone healthy game of the season for the former Heisman winner, and it shows exactly why general manager Rick Spielman traded a first-round pick for him. When he gets time, Bradford can simply carve up any defense, and he was throwing dime after dime in the season opener—playing injured, nonetheless, for people that want to question his toughness.

For those who still aren’t convinced, you should watch Bradford’s first start as a Viking in Week 2 of 2016.

Minnesota won’t have Pat Shurmur around anymore, but their offensive line should only get better, and Adam Thielen and Stefon Diggs are right in the prime of their careers. Plus, standout runner Dalvin Cook will be healthy, and the defense will still arguably be the best in the league (despite what Nick Foles just did to them).