Home / frontnfl / Tony Romo Is Good, But Not Extraordinary As A Broadcaster 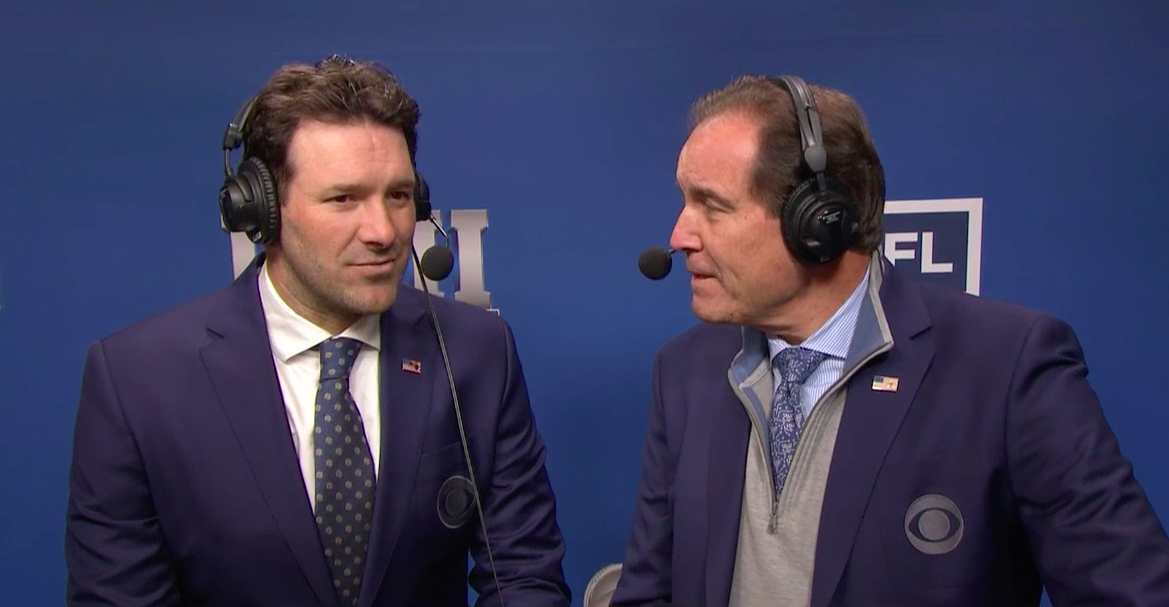 Tony Romo Is Good, But Not Extraordinary As A Broadcaster


Besides the Rams, Patriots, and Todd Gurley’s Instagram account, many football fans proclaimed Sunday’s big “winner” to be CBS color commentator Tony Romo for his insight in the broadcast booth during the AFC Championship Game. A simple Twitter search of Romo’s name shows that he was and still is being showered with praise for his foresight, knowledge, and giddiness, with almost universal agreement that he is the best in the business.

I wouldn’t be so sure.

Romo is clearly a very advanced football mind and genuinely seems like a fun guy to be around, but that doesn’t mean he is a transcendent voice in the booth. If predicting plays qualifies someone to be a head coach as some on social media are suggesting, then the former Cowboys quarterback is one of probably thousands that should be getting an interview next year. Troy Aikman does it. Dan Fouts does it. Even newcomer Jason Witten did it this year.

No one does it at the rate of Romo, but that’s because no one talks as often as Romo, who could probably call a game himself based on his inclination to do play-by-play man Jim Nantz’s job for him at times.

The 38-year-old’s believed prescience was obviously highlighted on Sunday for the biggest game of the year with everyone watching, but there really wasn’t anything extraordinary about the call. For example, it was easy to see Julian Edelman would be the target on a couple third-and-long conversions in overtime because he was a) sent in motion to confirm it was man-to-man coverage, b) lined up in bunch formations to create space, and c) was being defended by undrafted rookie Charvarius Ward. Plus, Edelman is one of the most clutch receivers of all-time.

What Romo saw before the snap was basically the same thing Tom Brady—the master of pre-play decision-making—saw, so it shouldn’t be mind-blowing that a guy who played at a high level in the league for 13 years was able to call out those huge conversions ahead of time.

Also, it isn’t as if Romo is flawless in his role as Nostradamus (those who have watched all season know that, and he had at least one “miss” yesterday), and unlike those watching at home, he has the benefit of seeing the game from an All-22 perspective, which is a completely different discussion.

This example isn’t about Romo’s football intelligence—which again, is very high—but just last week, there was an obvious replay review that CBS seemed to show 12-15 times before anyone in the booth noticed the runner’s back knee was down, and then when Romo finally pointed it out, not only was it extremely late, but you could tell by how everyone reacted (despite Nantz saying “good catch, Tony”) that someone else in the broadcast truck tipped him off.

It’s almost as if his mind is moving too fast, and he wants to say everything he can, which sometimes leads to rambling.

During his first year upstairs, Romo was at times self-deprecating to help endear himself to fans that were annoyed by in incessant talking, but that’s seemed to disappear into somewhat of a conceited approach. Despite the immediate praise in 2017 that has only exploded overnight, not everyone is a fan.

You will see quiet whispers on social media complaining about CBS’s top crew, and most notably, legendary broadcaster Brent Musburger warned Romo to take a step back and allow his partner to do his job last year.

Musburger is an old-school figure, though, and his opinion was viewed as “get-off-my-lawn” comments. I guess Romo is perfect for a generation that is constantly looking at their phone between plays or tweeting as much as they’re watching, but honestly, anyone that knows football and pays close attention should be able to predict plays with a solid success rate.

If Romo is able to reign everything in, he can be the best in the business. But he’s not there yet.