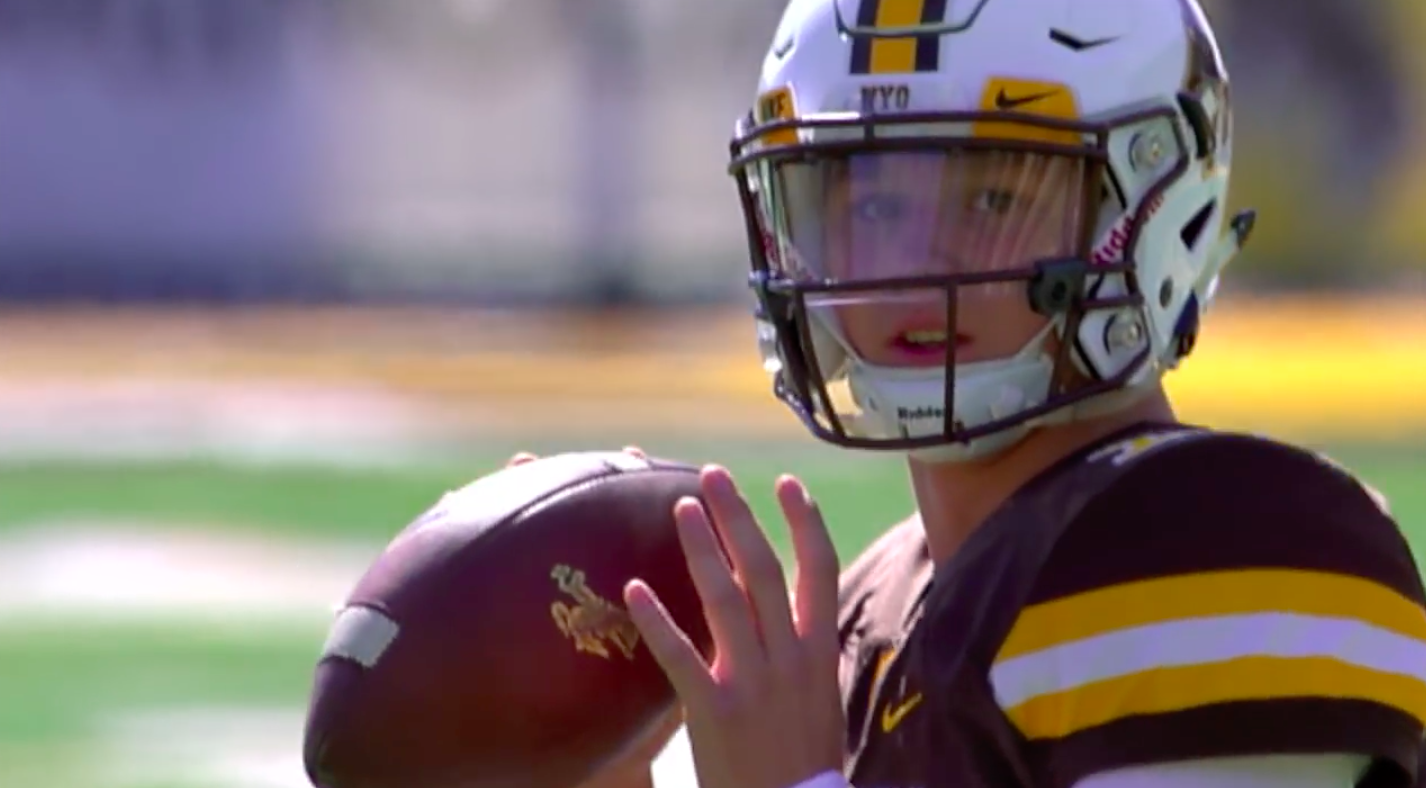 
College football is finally back today, and many people already have their eyes on the 2018 NFL Draft. Keep in mind that many things will change this fall, but here is a very early look at the top prospects for 2018.

Barkley probably won’t be the first-overall pick next year because of the position he plays, but Penn State’s all-around superstar is the best running back prospect I have ever seen. After rushing for 1,076 yards as an 18-year-old and 1,496 yards as a 19-year-old, there’s no telling what Barkley can accomplish in 2017. He’s like a mix of Devonta Freeman, LeSean McCoy, and Matt Forte, but faster and more powerful than all three with 4.3 speed.

We will have to see how Darnold plays with tape now out on him, but he looks like a lock to be the first name called in 2018. The Rose Bowl win against Penn State displayed everything NFL teams would love in a franchise quarterback—poise, accuracy, intelligence, arm strength, leadership, and clutch play.

Sure to be the most polarizing prospect in the draft class, Lamar Jackson has unteachable tools that a bunch of NFL coaches would love to get their hands on to mold. The Heisman Trophy winner has been compared to Michael Vick, and that’s a fair comparison, as he has a huge arm, electric running ability, and is more advanced as a passer than Vick. Jackson has also shown flashes of great accuracy, but he just needs to be a little more consistent.

The order of Darnold, Jackson, and Wyoming’s Josh Allen will be up for debate throughout the whole pre-draft process, and you could certainly make the case that Allen has the highest upside in the group. In 2016, Allen had no problems at all making NFL throws deep outside the numbers, and it looked easy for him. He’s also a great athlete that can tuck it and run.

James missed almost his entire sophomore season for the Seminoles, but he was a force against Ole Miss in the season opener, recording eight tackles and an interception. He’s now fully healthy, and will look to put fear into receivers coming across the middle all year long. James could use some work on his ball skills, but knows how to get after the quarterback at the safety spot.

This is a loaded offensive class at every position, and Kirk is the best of some really good wideouts. Texas A&M’s playmaker has 80+ catches in each of the past two years, but his stats don’t do his pro potential justice. Kirk can win at all three levels with his above-average route running, game-breaking speed, and excellent hands.

Key averaged a sack per game as a sophomore, and he is already being praised as the next top pass rusher like Von Miller, Khalil Mack, and Myles Garrett before him. However, there are some off-field concerns with the LSU star, as he briefly left the team for unknown reasons earlier this year. He’s back, though, and should be a force in the SEC all season long.

The best cover corner in college football, Jaire Alexander has tremendous ball skills and can quickly turn defense into offense when the ball is in his hands. That shouldn’t come as a surprise considering Alexander is an elite punt returner, but he also has top-notch cover skills that can make quarterbacks look the other way. He picked off Clemson legend Deshaun Watson twice last October, and also forced a fumble against the Tigers.

While scouts are already talking about teammate Dexter Lawrence as the top prospect in 2019, Wilkins has a lot of potential in his own right. The six-foot-four defensive lineman is a great athlete for his size, and projects to be a force as a run stopper and pass rusher at the next level.

Jefferson can do it all—tackle, drop back in coverage, rush the passer—and his speed and quickness makes him a perfect fit to play linebacker in the “new NFL.” The 20-year-old could probably add some bulk to his frame at just 240 pounds, but he’s got the makings of a really good pro.

Former scout Daniel Jeremiah’s comparison to Eli Manning is about as close as you could get when matching up prospects with NFL players. Josh Rosen was the top quarterback prospect in this class a couple years ago, but some inconsistency has allowed others to jump ahead of him. If Rosen has a big season for the Bruins, he will be a surefire first-round pick and could find his way into the top ten or higher.

Jalen Hurts playing quarterback for Alabama caused them to change the offense and gave Ridley fewer opportunities than he had as a true freshman, but we know the talent is there for the star receiver. Ridley already has NFL polish and explosiveness.

It was hard to find a more productive player than Landry last fall, as he totaled 16.5 sacks and forced seven fumbles for Boston College. If the senior pass rusher is able to have another big season (2016 was his first one), he should move up my rankings.

College football’s premiere big-play threat last year, James Washington averaged 19.4 yards per catch as a junior, and that was after averaging 20.5 yards per catch in his sophomore season. It’s not often you see a guy wearing #28 dominate as a wide receiver, but Washington has done just that. Also, you have to respect that he decided to stay in school with quarterback Mason Rudolph to see if they can make a run in 2017.

Williams has the highest upside out of any offensive lineman in the 2018 NFL Draft, as he is already a strong run blocker and pass blocker, and just turned 20 years old. The talented tackle was the only underclassman to be named an All-American on the offensive line last season, and he has a good chance to be the first player off the board at his position.

I just mentioned Rudolph when discussing his teammate James Washington, and the two could both find themselves in the first round next spring. Rudolph could be hurt by playing in a spread attack, especially because the guys ahead of him play in pro-style offenses, but he’s got all the tools that could make him a successful starter in the league.

His teammate Derwin James is considered a top-five prospect at the safety position, but McFadden was FSU’s best defender last year with James out. The cornerback had eight interceptions for the Noles, and he just needs to clean his coverage up a bit this season. McFadden will be right with Jaire Alexander as the top cornerback taken in the draft.

Those who didn’t know anything about Derrius Guice and Leonard Fournette last year might have thought Guice was the one who eventually became the top-five pick in the 2017 NFL Draft. The Baton Rouge native rushed for 1,387 yards and 15 touchdowns as a sophomore, including an eye-popping 7.6 yards per carry. He could be a top-ten pick if he improves as a receiver.

Crimson Tide defensive linemen have recently struggled in the NFL, but none have a name that screams beast defender like Da’Ron Payne. The junior profiles as either a 4-3 defensive tackle or a 3-4 defensive end that can eat up blockers because of his strength and technique. He’ll anchor Alabama’s defense in 2017.

There aren’t many six-foot-eight players in the NFL, but McGlinchey is all of that, and he should be a first-round pick next year. Notre Dame’s left tackle manned the right side until former first-rounder Ronnie Stanley was drafted, so he has experience playing on either side of the line. NFL speed rushers could be a concern for McGlinchey, but he’s solid everywhere else.

If not for a gruesome knee injury suffered as a sophomore, Chubb would have been yet another elite running back prospect in the 2016 NFL Draft class. The Georgia star had over 1,500 rushing yards as a true freshman, and he will look to return to that form (7.1 YPC compared to 5.0 last season) and rebuild his draft stock in his second year back from injury.

Clemson receivers seem to have a 100% chance of success in the NFL recently, and Deon Cain is next-in-line to be the top receiver for the Tigers. Cain scored nine touchdowns and averaged 19.1 yards per catch in 2016, and his head coach Dabo Swinney considers him one of the best players in the country.

The six-foot-four Sutton is a monster of a receiver, and he was unstoppable at times for SMU in 2016, catching 76 passes for 1,246 yards and 10 touchdowns. He is a good downfield threat with a big catch radius, but Sutton needs to add more polish in his junior season to be grouped with Kirk and Ridley at the top of the class. I’d also like to see him perform well against the best competition, as he failed to standout against Temple with just four catches for 43 yards.

If you put a #2 Texas A&M jersey on Mayfield, you might think you were watching Johnny Manziel play. Mayfield might not be quite as dynamic, but he profiles very similarly to the player formerly known as “Johnny Football.” Unfortunately, he also has some similar off-field concerns, but his abilities are undeniable as a passer and playmaker.

Fitzpatrick showed great versatility last season when he switched positions from cornerback to safety for Nick Saban’s defense, and that could eventually help him in the NFL, as he can make plays as a safety, corner, or nickel. He has good ball skills and is a willing tackler.