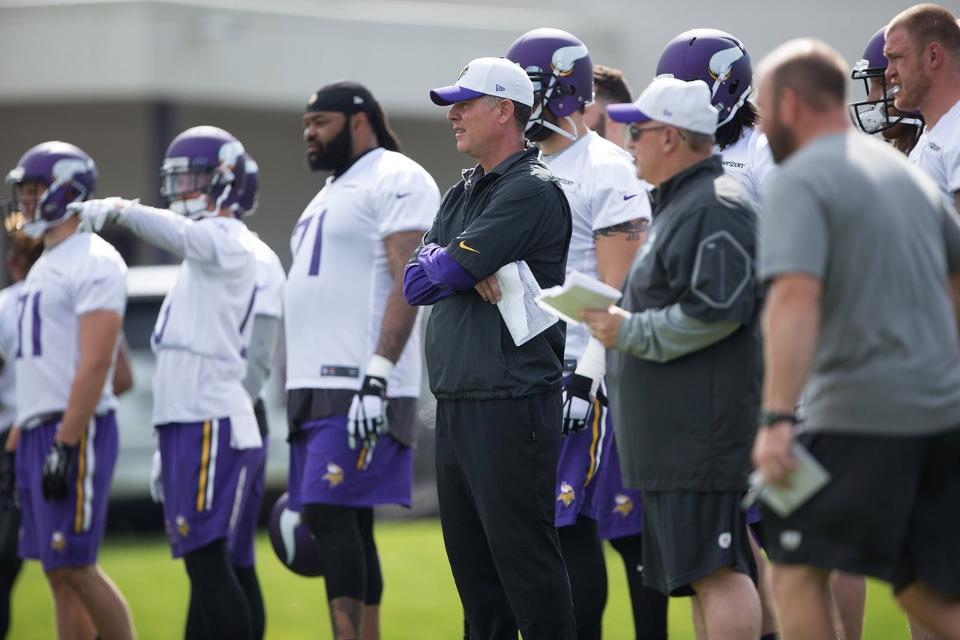 
Earlier this week, the Chicago Bears filled in their vacancy at head coach by hiring former Chiefs offensive coordinator Matt Nagy. I believe it was a strong hire that will hopefully unlock Mitchell Trubisky’s potential in 2018 and beyond. Then, yesterday, Jon Gruden was officially introduced as the next head coach of the Oakland Raiders in an entertaining press conference. I think that hire is an absolute home run for Mark Davis, but who should the other four franchises looking for a head coach to lead them target? Here are my (realistic) choices.

The work that Pat Shurmur has done in Minnesota since taking over as offensive coordinator in the middle of 2016 cannot be overlooked, as he coached Sam Bradford to a record-breaking season last year and vaulted Case Keenum into the MVP conversation this year. Shurmur has always been a strong offensive mind, but his time as Chip Kelly’s OC in Philadelphia really turned him into one of the game’s best. In Arizona, there would be a good chance he can bring Sam Bradford, Case Keenum, or Teddy Bridgewater over with him, which would create a potentially potent offense when paired with David Johnson. The offensive line might be a concern, but general manager Steve Keim has done a nice job with the overall construction of the roster.

Unlike the Cardinals, Detroit clearly has their franchise quarterback in Matthew Stafford. That could give them reason to go after a defensive coach, which would allow offensive coordinator Jim Bob Cooter and his system to remain in place for Stafford. Matt Patricia has been in New England since 2004, and he’s learned behind Bill Belichick as his top defensive lieutenant since 2012, so teams would be hard-pressed to find a candidate that is more prepared than the 43-year-old. I think Patricia could be the leader the Lions need to go from solid to elite both defensively and as a team.

The Colts were the team I had the most trouble with, but that’s just because they were the instigators of the Deflategate scandal, so McDaniels might not want to join the franchise. If that’s not under consideration, McDaniels and Andrew Luck would be a lethal combination in the AFC, as Luck is a legitimate superstar when he’s healthy, while New England’s offensive coordinator has been paired with Tom Brady from 2004 to 2008 and then 2012 to now. The 41-year-old should be ready for another head-coaching opportunity after being fired in his second season with Denver, and it would be awesome to see him calling plays for an offense that has Luck and possibly Penn State’s Saquon Barkley.

It sounds like it’s only a matter of time before Eagles quarterback coach John DeFilippo gets an opportunity as a head coach, and the Giants would be wise to get him before another team does either this year or down the line. It might seem like a daunting task to make the jump from position coach to head man, but New York would be an enticing spot, as they should have their choice of quarterback prospect in April’s draft with the second-overall pick. After the job DeFilippo has done with Carson Wentz, I think any young gunslinger would be happy to land in New York if the 39-year-old is hired. This would be both a big hire for the Giants and a blow to Philadelphia.