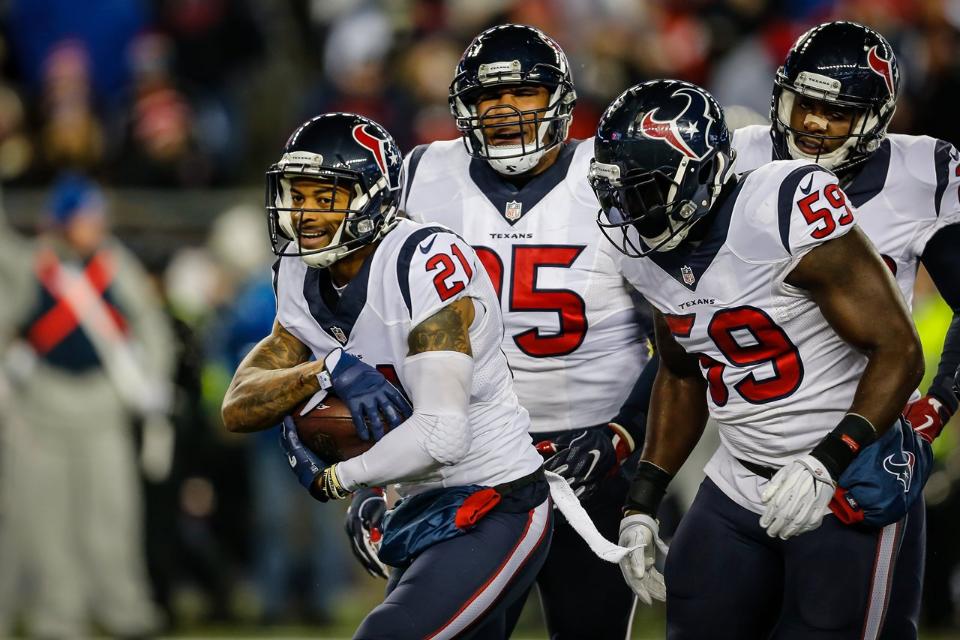 
Here are some of the top free agents that will be available on March 9, when free agency begins. The legal “tampering” period in which teams can negotiate with agents begins on March 7. Please note that a lower ranking does not denote a bad player; most of these players on this list can make a big impact for a team and the rankings can surely be debated and changed. ***UPDATE: 3/7: added D.J. Fluker, recently released by the Chargers, before the legal tampering period begins at noon Eastern.

Hightower is right in the prime of his career, as he will turn just 27 on March 12. He is a very good run stopper and blitzer that will make the entire defense better.

Almost out of nowhere, Bouye became one of the most integral parts of the Texans’ number one defense (in terms of yardage). The former undrafted free agent is going to get paid big time.

“All Day” is not someone to bet against. Despite him missing large parts of two of the last three seasons (not by his choosing in 2014) and going on age 32, Peterson will be fresh and he will be motivated—as always.

Keep in mind, this is without full knowledge of Charles’ situation with his knees; we do not have his physical to look at. However, if he checks out, this is a guy that does not average under 5.0 yard per carry—that is insane. He’s also among the best receiving backs in the NFL.

There seemed to be some kind of miscommunication—or something—with his fellow defensive backs on quite a few occasions last season. He gave up some big plays, but Gilmore did have a career-high five interceptions. 6’0” with long arms, Gilmore is a great fit for any team looking for press corners.

The clear number one receiver available in free agency stands at 6’3” with 33” arms—defensive backs do not want to be in a jump ball situation with Jeffery. The PED suspension has to be slightly concerning, but when Jeffery is on the field he produces. Is he worth as much as someone like Julio Jones ($15 million/year), though?

At 6’8” and 300 pounds, Campbell can do almost anything you ask him. He’s had at least five sacks in every season of his career besides his rookie season, and he is also a good run stopper and can deflect passes with his huge frame.

If teams are looking for someone to stuff the run, they will be looking at Brandon Williams. He will instantly improve a team’s run defense.

Despite only playing one full season as a wide receiver, Terrelle Pryor looks the part. He put up 77 receptions for 1,007 yards an four touchdowns with the Browns. Despite some inconsistency (which is to be expected), Pryor always looks like an alien-like receiver—like a Brandon Marshall type—that looks almost unfair next to some cornerbacks.

Going on his sixth season in the league, Poe is still only going to be 27-years-old in August. Like Brandon Williams, Poe will instantly improve a team’s run defense.

11. T.J. Lang, guard (Green Bay Packers) postseason injury might complicate things, but Lang is among the best guards in the NFL

12. Kevin Zeitler, guard (Cincinnati Bengals): probably better as a run blocker than pass blocker, but would be a nice get for any team

14. Andrew Whitworth, offensive tackle (Cincinnati Bengals): would be higher if he wasn't 35-years-old

15. Darrelle Revis, cornerback (New York Jets): reportedly has shed 15+ pounds and is down to around 200 pounds already; was clearly not 100% last season and could be a steal for a team

16. Latavius Murray, running back (Oakland Raiders): despite 4.0 ypc, Murray is a big back with great athleticism

18. Eddie Lacy, running back (Green Bay Packers): Lacy was having a nice contract year until he got hurt; will likely return to Packers

21. Logan Ryan, cornerback (New England Patriots): a great postseason as he enters free agency; can play inside and outside

23. Martellus Bennett, tight end (New England Patriots): big-bodied tight end that is not afraid to block in the run game

25. Michael Floyd, wide receiver (New England Patriots): Floyd did not take advantage of his contract year, but he has the size and skill to make a big impact for a team

27. Micah Hyde, defensive back (Green Bay Packers): one of the most versatile DBs in the NFL

31. Riley Reiff, offensive tackle (Detroit Lions): can play both right and left tackle for a team

32. Nick Perry, linebacker (Green Bay Packers): will give a team a boost off the edge

33. Ricky Wagner, offensive tackle (Baltimore Ravens): would be an upgrade at the right side of many offensive lines

34. Duron Harmon, safety (New England Patriots): extremely solid player for the Patriots; might be better suited to stay with NE

36. Kevin Minter, linebacker (Arizona Cardinals): had over 80 tackles each of the last two seasons; liked him out of LSU

37. Dre Kirkpatrick, cornerback (Cincinnati Bengals): only 27 with a lot of playing experience on good defenses

38. Jonathan Cyprien, safety (Jacksonville Jaguars): sure tackler on the back end

40. Lawrence Timmons, linebacker (Pittsburgh Steelers): getting up there in age which may hurt his speed, but he will still get the job done

41. Cordarrelle Patterson, wide receiver (Minnesota Vikings): extremely talented player that proved he can contribute as a receiver with the Vikings last season

42. LeGarrette Blount, running back (New England Patriots): led the league in rushing touchdowns last season, can be a workhorse

43. Jared Cook, tight end (Green Bay Packers): was a great target for Aaron Rodgers once they got some chemistry

69. Jairus Byrd, safety (New Orleans Saints): former big-time free agent acquisition will look to get back to his old ways

73. Terence Newman, cornerback (Minnesota Vikings): despite getting up there in age, Newman showed last season that he can stick with these young receivers

93. Geno Smith, quarterback (New York Jets): has the potential to turn into a good starting quarterback

101. Brian Hoyer, quarterback (Chicago Bears): a great option if you're looking for a stop-gap for a young franchise quarterback