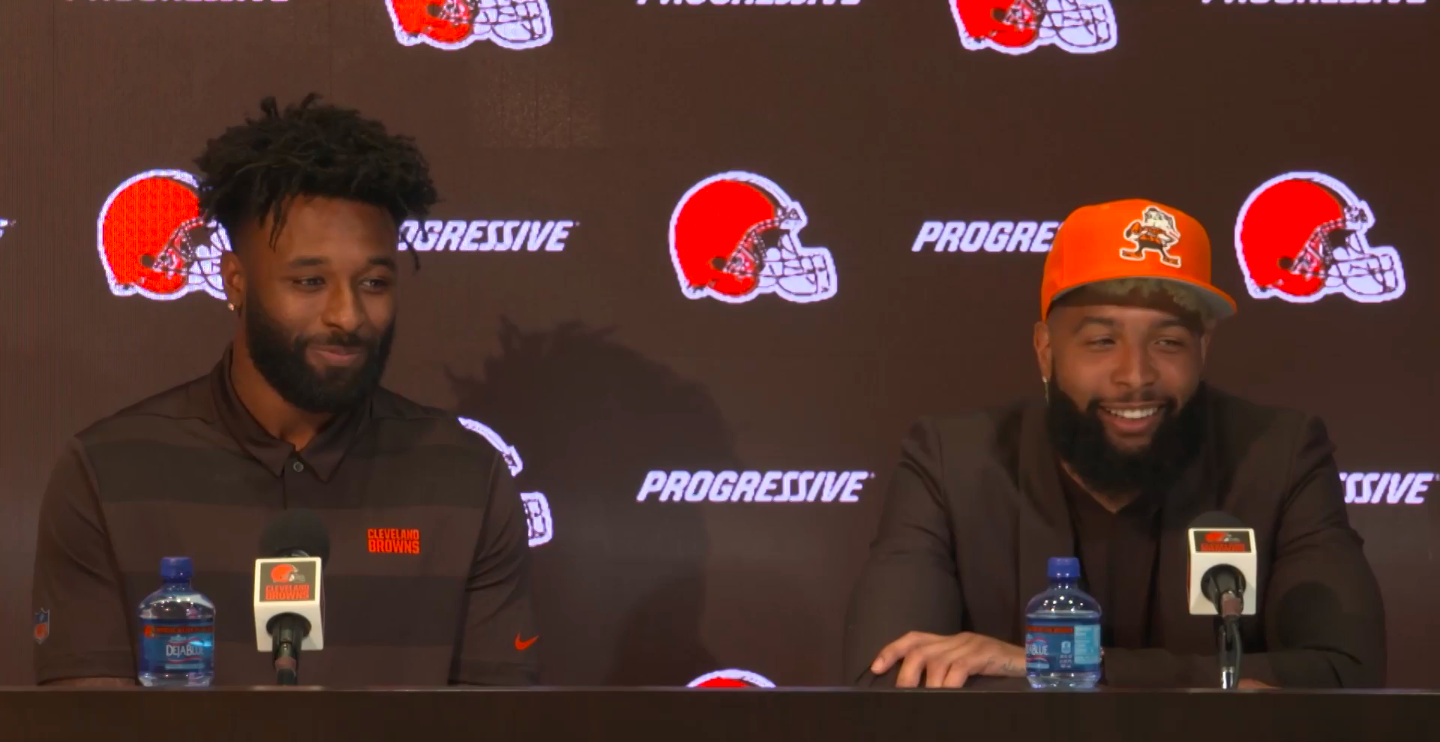 
Earlier this week, Odell Beckham Jr. was officially introduced as a member of the Cleveland Browns, joining one of the most exciting teams in the league on paper. There’s already a lot of talk about where Beckham and his good friend Jarvis Landry stack up among the best receiving duos in football, but I believe there are a handful of duos that are a clear step above the former LSU teammates. These are my top wide receiver duos for 2019.

Raiders head coach Jon Gruden says he wants his team to have the best receiving corps in football, and the duo of Antonio Brown and Tyrell Williams could certainly be higher than No. 10 on the list. However, both guys are coming in from new teams, while the top-nine pairings have incumbents from last season or guys that have played together in the past. AB is obviously highly productive, and Williams is a former 1,000-yard receiver that could excel in a bigger role with Oakland, so you can still make an easy argument for the Raiders being closer to the top five.

Matthew Stafford has a couple of 1,000-yard receivers at his disposal in Detroit, as Kenny Golladay joined the 1,000-yard club in his second season after he was forced to step up because of Marvin Jones Jr.’s season-ending knee injury in Week 10. While Golladay has a short sample size of just two seasons, he and Jones both average over 15.0 yards per reception for their careers, and they have the size at six-foot-four and six-foot-two, respectively, to make plays down the field on deep balls and back-shoulder throws. The Lions duo is undoubtedly among the best combinations in football as outside receivers on the boundary.

Mike Evans has five straight 1,000-yard seasons to begin his career, and he’s coming off a career-high 1,524 yards and 17.7 yards per reception from his age-25 campaign last season. Meanwhile, Chris Godwin was able to produce when given opportunities in his first two seasons after he was selected in the third round of the 2017 draft, and he caught seven touchdowns last season. Evans can dominate on the outside and can also move into the slot as a target that’s too big for nickel corners, and Godwin shares the versatility to play both inside and outside, which will help new Bucs head coach Bruce Arians create good matchups for his offense.

Statistically, Alshon Jeffery and Nelson Agholor probably don’t belong on this list ahead of a handful of other duos—including combinations like A.J. Green/Tyler Boyd, T.Y. Hilton/Devin Funchess, and DeAndre Hopkins/Will Fuller that missed the cut—but the two Eagles receivers could certainly put up big numbers if the offense dictated it. Both guys are all-around players, and Agholor in particular is an excellent blocker (arguably the best blocking receiver in the league), and that gives them a boost for me instead of just focusing solely on receiving ability. Also, both guys stepped up on the biggest stage to help lead the Eagles to their first Super Bowl, and I think because of their clutch play, they could potentially be higher ranked if anything.

Until the Saints’ Michael Thomas broke the record last season, Odell Beckham Jr. and Jarvis Landry shared the NFL record for most receptions through three seasons (288). Both guys have over 5,000 yards through five NFL seasons, and it’s pretty cool they both ended up in the same place professionally after going to college together at LSU and becoming best friends. While the duo might be getting a little too much hype at the moment, both OBJ and Landry can both run every single route from any position on the field, and they both play bigger than their size as sub-six-foot receivers.

Cooper Kupp also could’ve been included with either Robert Woods or Brandin Cooks for the Rams’ receiving duo, and this group would easily be No. 1 if it was a ranking of wide receiver trios. Woods and Cooks get the nod over Kupp because they’ve been around longer. Cooks might be seen as more of the field stretcher while Woods goes over the middle more frequently, but both guys do everything well—Cooks is fearless going over the middle, and Woods has shown he can stretch the field. There’s an argument for them to be higher than No. 5.

Statistically, it’s hard to put anyone above the Vikings’ combination of Stefon Diggs and Adam Thielen, as the duo put up respective lines of 102/1,021/9 and 113/1,373/9 in 2018, becoming the fifth pairing in league history to hit the century mark in receptions in the same season (along with Antonio Brown and JuJu Smith-Schuster also accomplishing the feat last year). Diggs and Thielen are excellent players, but they each were top-ten in targets last season (as were Brown and Smith-Schuster), which obviously helps them put up those type of numbers.

Based off last season, Keenan Allen and Mike Williams probably wouldn’t be in the top three among the NFL’s best wide receiver duos, but Williams was a bit of a monster during some stretches, scoring 11 touchdowns including three in an epic comeback win versus the Chiefs in which Allen was injured early in the game. Williams’ role is set to increase with Tyrell Williams now in Oakland, and Allen is unquestionably already one of the league’s best receivers.

The Chiefs went out and spent big money on Sammy Watkins last offseason, and it gave them the most explosive wide receiver duo in the league in Watkins and Tyreek Hill. Watkins gets a bad rap from some “experts,” but the former first-round pick is a very underrated talent that can run every route in the book at a high level, and he has top-notch toughness for the position. In games Watkins started and finished during the regular season in his first year in Kansas City, the Chiefs were 7-1 (compared to 5-3 without Watkins in the lineup). And in their AFC Championship loss, Watkins caught four passes for 114 yards in a tough matchup with the Patriots. Hill’s elite game-breaking ability is well-documented, and Watkins is right there with him in terms of ability.

Calvin Ridley entered the NFL ready to play as a first-round pick out of Alabama last year, compiling 821 yards and ten touchdowns, including a scorching stretch with six touchdowns from Weeks 2-4. He might’ve hit a slight rookie wall, but he came on strong again toward the end of the season—expect him to be more consistent in 2019. On the other side, there’s a guy named Julio Jones, who in my opinion is without question the best receiver in football. The duo of Jones and Ridley is electric, and it should also be among the most dependable, as well as dynamic, next season and beyond.