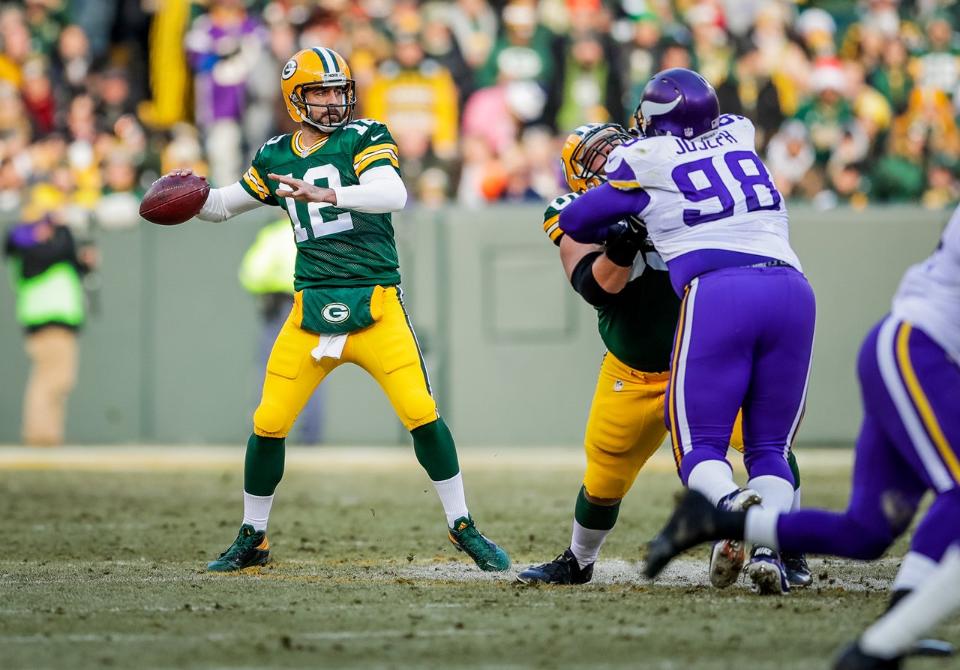 This was already an intriguing game to kickoff the Monday Night Football schedule, and it got even better after Adrian Peterson signed with New Orleans this morning. Now, AD will return to Minnesota for his first game on a different team, and he is sure to receive a standing ovation. It will be interesting to see how Latavius Murray does replacing Peterson for the Vikings.

Another return here, as Tony Romo is expected to call his first Dallas game in Week 9 (if he stays retired). The Chiefs and Cowboys are expected to both be legitimate contenders in their respective conferences, so a game at the season’s midpoint against a tough opponent could give the winner a lot of momentum down the stretch.

Aaron Rodgers and Ben Roethlisberger have met three times in their careers, and each game has been a classic, including Super Bowl XLV, when the Packers won 31-25. Late scores by the Steelers gave them wins in the other two games, but I’m sure Green Bay will take the championship. The perennial contenders should put on another high-scoring display on the Sunday after Thanksgiving.

Speaking of classics, that seems to be the case whenever the Eagles and Cowboys meet on Sunday Night Football. The teams split their games in 2016 (though Dallas rested their guys in Week 17), and their 2017 Week 11 game has the potential to go a long way in deciding the NFC East. Carson Wentz versus Dak Prescott could be a marque matchup for the next decade.

The schedule-makers gave Tennessee (two primetime games) less respect than some of the other emerging teams, but they do have a great game against Pittsburgh in a loaded Week 11. If his growth from year one to year two was any indication, Marcus Mariota should be a superstar soon enough, and facing the Steelers in primetime will give both Mariota and the Titans a good test.

Six primetime matchups for Kansas City shows how the league feels about them in 2017, and we feel the same way. The Chiefs have all the pieces to compete with New England in the AFC, and knocking off the defending champs in Foxborough would be huge. It’s going to be awesome getting our first look at the re-shaped (and stacked) Patriots in the season’s opening game.

Christmas Night football in Philadelphia? Even if the Eagles don’t make a jump in Carson Wentz’ second season, the atmosphere in a hopefully frigid South Philly should be awesome against the sure-to-be-contending Raiders. People will probably lose their minds (in a good way) if it snows and the Eagles are fighting for a playoff spot.

Will Beast Mode be playing running back for Oakland? We should have our answer in a couple of days. Either way, the Raiders would have been a great matchup for the Pats in the playoffs last season if Derek Carr didn’t get injured, and we should get our wish in Week 11. It wouldn’t be surprising if both these teams had two, one, or zero losses at this point, so it could turn into a game with big implications in the race for the #1 seed in the AFC.

This lofty spot shows that we believe the Vikings and Packers will be competing for the NFC North crown. It would have been better on Christmas Eve or Christmas Day (instead of December 23rd), but like Philadelphia a couple days later, Green Bay should have an insane environment for a game that could decide the King in the North.

How can anything other than a rematch of Super Bowl LI be ranked first? We’ll have to see how both teams play the draft and the rest of the offseason, but Week 7 should bring us a heated matchup between two great teams. Brandin Cooks struggled against Atlanta twice a year when he was with the Saints, but the Patriots’ ever-changing game plan should keep them from going down 28-3—but it wouldn’t be wise to bet against them if they did.