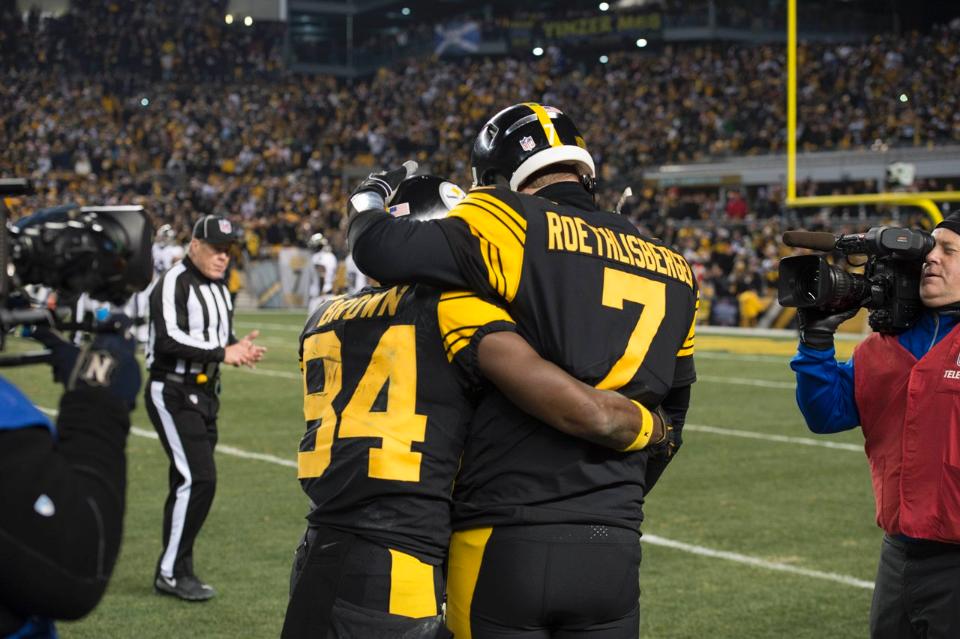 
For this week’s Top Ten Tuesday, we are going over the best “triplets” in the NFL. This exercise includes one quarterback, one running back, and one receiver (wide receiver or tight end); for example, Eli Manning, Odell Beckham Jr., and Brandon Marshall can’t be selected for the Giants—there has to be a running back. We tried not to weight quarterback too much, because otherwise the Patriots would be number one based on them having Tom Brady, despite not having a clear-cut top running back in the trio.

This was basically a toss-up between the Falcons and the Steelers, but Atlanta gets the nod here. Matt Ryan is coming off an MVP season, Julio Jones is uncoverable, and Devonta Freeman is a do-it-all guy out of the backfield. Tevin Coleman, who might be better than his teammate Freeman, could also be in the running back spot on the list, showing how good the Falcons are.

Le’Veon Bell and Antonio Brown are arguably the top players at their respective positions, which makes it difficult for opposing defenses to stop the Steelers. To put it another way, it’s uncommon for two players from the same team being consensus top-five fantasy football picks. And Ben Roethlisberger is a two-time Super Bowl champion, so you could certainly put them in the number one spot on the list.

It’s unclear who will be the Patriots’ lead primary power running back, so we’ll go with one of the stars of Super Bowl LI, James White. For the receivers, Julian Edelman and Brandin Cooks both could be the receiver option, but Gronk will probably be the greatest tight end of all-time. This offense is going to be scary, and there’s no one better to lead it than Tom Brady.

Converted running back Ty Montgomery was outstanding last season, and we’ll see how he performs in a full season at the position. At the very least, he’ll be a mismatch out of the backfield for Aaron Rodgers. Meanwhile, Rodgers and Jordy Nelson might have the best chemistry of any quarterback-receiver duo in the NFL.

If the season goes well for New Orleans this season, the Saints could shoot up all the way to the top spot on this list. Drew Brees and Adrian Peterson should both be locks for the Hall of Fame, and Michael Thomas is a hard worker that could emerge as an elite receiver after his outstanding rookie season.

When the Chargers are good, balance in the offense is a big reason for it. Third-year back Melvin Gordon is looking to get up there with David Johnson and Le’Veon Bell in the upper-tier of running backs as an explosive runner and receiver. Keenan Allen is coming off a torn ACL and has the trust of Philip Rivers. These three might be the most important members of a Chargers team looking to get back to the playoffs.

This trio is led by the highest-paid player in the NFL, a recently unretired running back, and a 23-year-old receiver that’s already entering his third season in the NFL. Like their division rival Chargers, balance will be a big part of the Raiders and will help them take another step forward.

Dak Prescott and Ezekiel Elliott burst onto the scene as rookies last year, and they’ll look to continue that this season. Dez Bryant has battled injuries and hasn’t gone over 800 yards in either of his last two seasons, but he offers the upside of a borderline top five receiver in the league.

Two vets, Carson Palmer and Larry Fitzgerald, are an integral part of this trio, but young running back David Johnson is the one that the offense runs through now. This could be the final season of this trio playing together, but they’ll try to make it a good one.

The top nine is locked in, but the number ten spot was the most difficult to decide. But Buffalo’s trio is more established than some of the others like Minnesota and Tennessee, even with Sammy Watkins on and off the field with injuries. The offense for the Bills will clearly run through Taylor, McCoy, and Watkins.