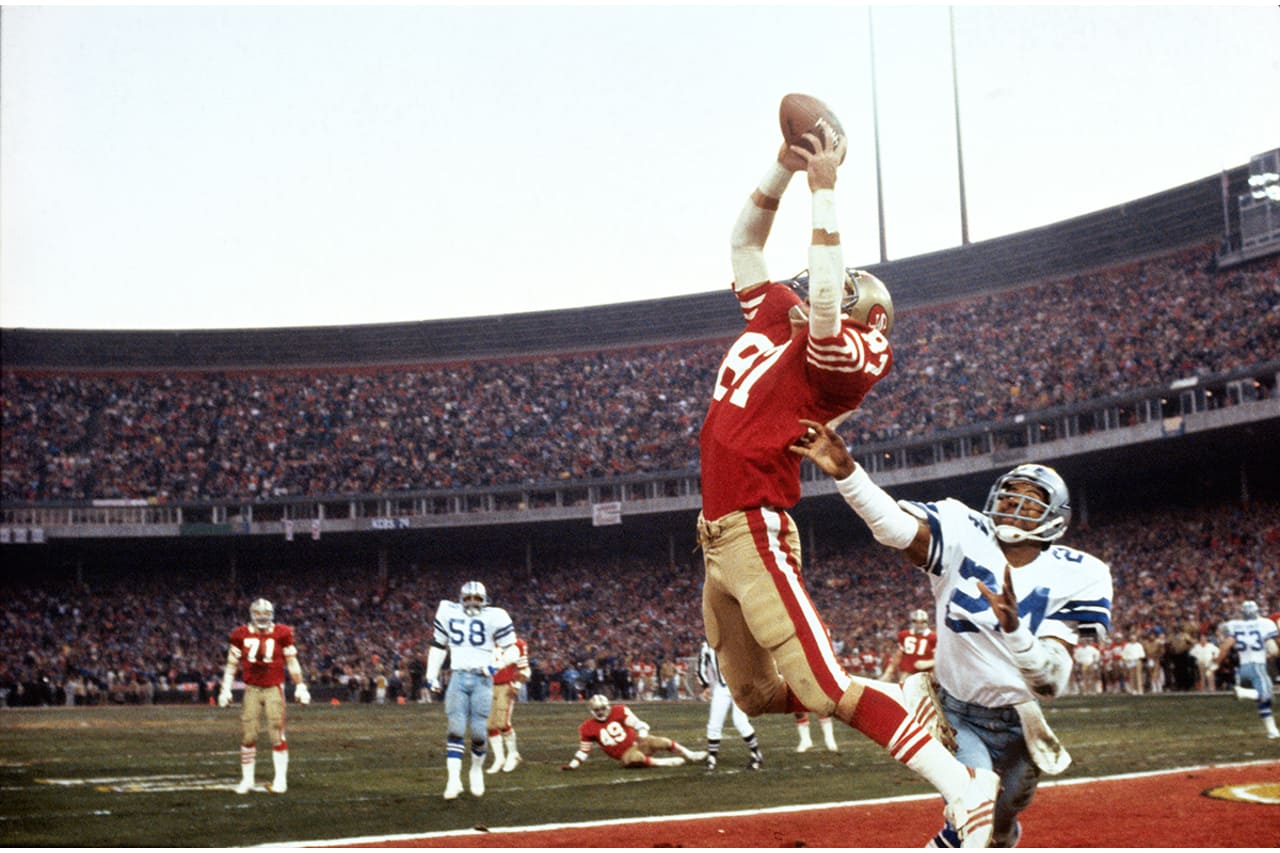 
Two-time Super Bowl champion Dwight Clark was on the receiving end of one of the greatest plays in sports history, “The Catch”, in 1982 for the San Francisco 49ers. Yesterday, Clark died at the age of 61 after a battle with ALS, so to honor his legacy, we have ranked the top plays in NFL history. Where does “The Catch” land on the top ten? [Note: all the plays come in the postseason because that’s when games matter the most]

This is the only play on the list that didn’t occur late in the fourth quarter or overtime, but it had everything—time running down in the first half, a turnover with Arizona knocking on the door, a less-than-fleet-footed defender making would-be tacklers miss, and Larry Fitzgerald sprinting from no where to nearly tackle James Harrison short of the goal line.

Tim Tebow’s final win as a starting quarterback came in the 2011 AFC Wild Card Round against the Steelers and their No. 1 ranked defense. Denver did enough in regulation to send the game into overtime, and all it took was one play for Tebow to hit Demaryius Thomas in stride, allowing the young receiver to do the rest with a stiff arm and sprint for the game-winning touchdown.

“There are no flags on the field!” The call does the play justice without having to say anything else about it.

Joe Buck also had a great call for Stefon Diggs’ miraculous touchdown reception in January, and perhaps the play would be higher on the list if Minnesota’s season ended on a higher note the following week or in Super Bowl LII. However, that shouldn’t take away from a memorable moment and season by the Vikings with backup Case Keenum leading the way.

How great was Super Bowl XLIII? Following a 64-yard catch and run by Larry Fitzgerald to take a 23-20 lead with 2:37 to play in the fourth quarter, Pittsburgh drove downfield and were in position to at least potentially tie the game with a field goal attempt, but a perfect throw by Ben Roethlisberger and phenomenal footwork by Santonio Holmes resulted in a 27-23 lead with 35 seconds to play, and the Steelers held on to win their sixth Lombardi Trophy.

Everyone always goes back to the unbelievable catch by David Tyree—and deservedly so—but Eli Manning’s escape in the pocket was just as important for the Giants on the iconic play that many look at as ending New England’s bid for a 19-0 season and their fourth ring in seven seasons.

Even the most casual football fan has probably at least heard of the Immaculate Reception, as Franco Harris became a legend and helped start Pittsburgh’s dynasty with a single catch in 1972 Divisional Playoffs. The Steelers had never won a playoff game and were trailing by a score of 7-6 to Oakland when Terry Bradshaw threw a pass that bounced backwards into the hands of the rookie Harris, who ran it in for a touchdown, and while they were knocked off in the AFC Championship, Pittsburgh ended up winning four titles in the 70s with Bradshaw under center.

Being the standout play during the Patriots’ 25-point comeback against Atlanta vaults Julian Edelman’s reception towards the top of the list, and the circumstances makes it arguably the most difficult catch in NFL history. Edelman had arms and feet from three defenders trying to keep him from making the play, but he was able to focus enough to haul it in and set New England up in Falcons territory. The rest, as they say, is history.

2. Malcolm Butler does his job in Super Bowl XLIX

“28-3” has seemingly overshadowed New England’s comeback in Super Bowl XLIX a bit, but Tom Brady led the offense to 14 points in the fourth quarter to take a 28-24 lead against Seattle’s vaunted defense before Russell Wilson answered with a drive of his own. But with the Seahawks knocking at the door of the end zone, Bill Belichick sent in undrafted cornerback Malcolm Butler, and the rookie made a play for the ages by jumping the route to intercept the pass, giving the franchise their fourth ring.

San Francisco went into the 1981 NFC Championship Game with an unproven coach (Bill Walsh) and quarterback (Joe Montana) facing the mighty Dallas Cowboys, and they trailed late in the fourth quarter, 27-21, before Montana floated a pass into the end zone that Dwight Clark came down with. The play shocked the football world and “America’s Team”, leading to the 49ers having a dynasty of their own, as they would win the Super Bowl that year and three other times with Montana in the 80s. Clark and “The Catch” will live forever.