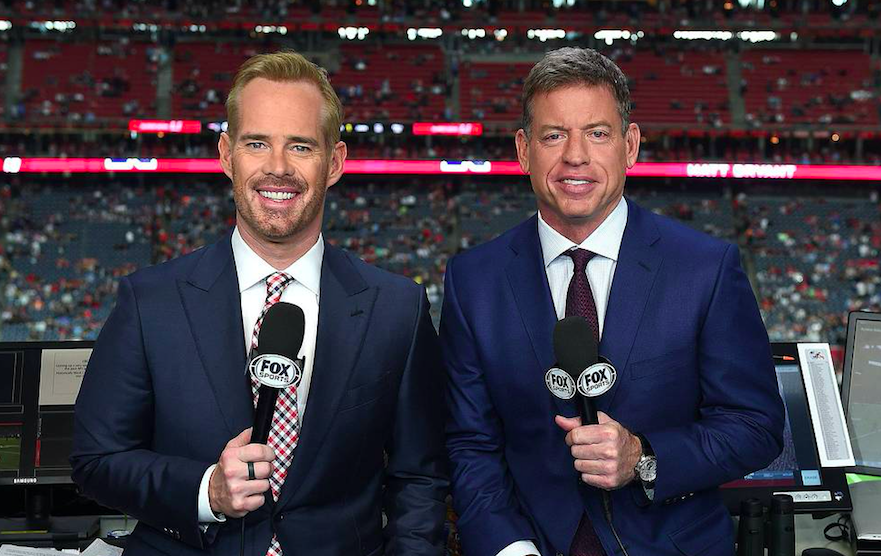 
A good announcing crew can make or break the experience of watching a sporting event, and that’s especially true with football. Here are the top ten color commentators currently calling NFL games.

A lot of people have Cris Collinsworth towards or at the top of the list, but over the past couple years, he’s seemed to have fallen off because of his involvement with Pro Football Focus. He still knows the game better than most, but Collinsworth is sometimes overdramatic and can be annoying.

Johnston was in a three-man team of “Kenny, Moose, and Goose” for years, but he’s been paired with Chris Myers recently. The former Cowboys fullback’s old-school mentality is welcomed at a time where football is—for better or worse—getting softer.

Paired with the great Kevin Harlan, former NFL MVP Rich Gannon is a steady presence in the broadcast booth, as he doesn’t feel the need to take control with Harlan doing his thing every week. Sometimes the analyst steps in too much over the play-by-play man, but that doesn’t happen with Gannon.

While Romo has been a breath of fresh air in the booth, people are getting way ahead of themselves by calling him the best in the business. Yes, he can make viewers laugh and knows the game, but he also can come off as a little self-righteous at times. As far as calling out the play before it happens, that’s something that many color commentators can and have done. It’s still his first season, though, so Romo has plenty of time to improve or eliminate parts of his broadcast game.

Trent Green is very similar to Rich Gannon in that they never overstep their role, as he allows longtime play-by-play man Greg Gumbel to call the game. You never have to consider muting the game with Green and Gumbel calling it, which is obviously a good thing, but can’t be said for everyone.

The top CBS voice on the list, Hall of Fame quarterback Dan Fouts and the underrated Ian Eagle always do a great job of calling NFL games. The two have been good enough to be elevated to the number-two team for the network in 2014, and Fouts brings common sense and vast football knowledge to the booth.

Spielman is arguably the most-underrated color commentator on the list, as he’s been successful in two- or three-man booths and is one of the few defensive analysts calling games. It’s no surprise that he’s one of the best after being an All-American linebacker in high school and college before he was a three-time All-Pro selection in the NFL.

The only other former defender on the list, Charles Davis has only been in the booth for three seasons as an NFL analyst for FOX, but he’s already one of the best. Davis knows a lot about the game and its players from his time covering the NFL Draft for NFL Network, but he is able to connect with even the most casual of viewers. He and play-by-play man Kevin Burkhardt have quickly become an elite team in their first full season together.

The top spot on the list could have easily gone either way, but we acknowledge that Gruden’s style—somehow—isn’t for everyone. The former Super Bowl champion head coach has an unmatched passion for the game, and whether intentional or not, he’s hilarious every Monday night for one reason or another. Like the top color commentator on the list, Gruden also isn’t afraid to tell it like it is in regards to the officiating, playing, or coaching.

People have been quick to crown Tony Romo as the king after just nine weeks in the booth, but Troy Aikman still the best of the best. Despite being a three-time Super Bowl champion quarterback for the Dallas Cowboys, Aikman is as unbiased as it gets no matter who he’s on the call for. A straight shooter, Aikman is never disrespectful towards players or anyone else, but he doesn’t hesitate to call guys out for lack of effort, boneheaded plays, or selfish actions.