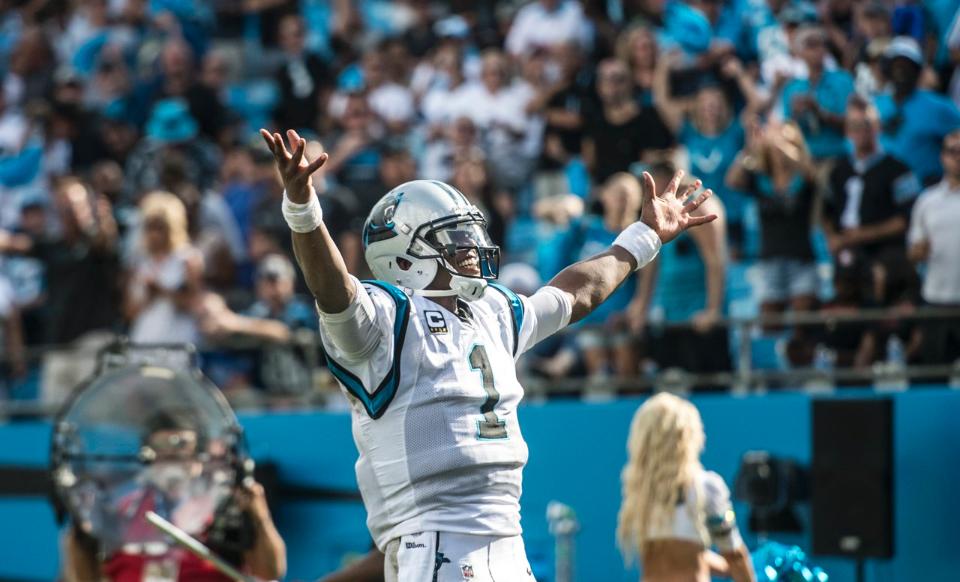 
The NFL is trying to lose the “No Fun League” mantra, as Commissioner Goodell said they have passed a rule allowing end zone celebrations. With that exciting news, we are sure to see plenty of guys choose to get creative after scoring this season. However, many of the best and most plausible touchdown celebrations have already been done by guys like Chad Johnson and Terrell Owens. So, what’s left? Here are some ideas, some of which we may see, and some of which are a little too… violent… and would still likely produce a fine—or worse. Kids are watching, after all.

10. Some kind of group dabbing

Let’s just get this out of the way because we all know it’s going to happen: the offense assembles in the end zone and all dab for a picture.

I am not really a fan of bat flips in the MLB when they are clearly disrespectful, but there are definitely some funny ones, like when Odubel Herrera does it on a routine fly ball to centerfield. Crossing the end zone, taking a big swing, and flipping the football in the air like a bat is probably something we will see this fall.

This is probably one of the less plausible celebrations, but it would be hilarious to see a player forego the Lambeau Leap (if they’re in Green Bay), stand on the top of the end zone wall, and give a flying elbow to a teammate down below. The NFL might allow this, but I doubt any teams will let it slide without a significant fine because of the injury risk.

A popular WWE move that would be a little less dangerous than going off the top rope would be a simple RKO to an unaware (i.e. acting unaware) teammate. For this and the previous celebration, another teammate could slide in for the three count on the pin.

Now, this is definitely one of the violent celebrations that would be sure to result in a fine, but paying homage to one of the best movies of all-time would work like this: the player who scores would be Michael Corleone, standing far away and looking on at two teammates in a “boat” before one “assassinates” (with the football) the other like Fredo was killed on his brother’s order. Alright that was pretty dark, but fans of the classic movie would enjoy it.

We’ve seen professors, students, coaches, and players be dunked on with the little Nerf ball and basket, but it hasn’t been done for an NFL celebration. It would result in a penalty (and likely fine), but imagine dunking on an unsuspecting referee.

4. "The man who passes the sentence should swing the sword."

If you thought The Godfather celebration was too graphic, how about a Game of Thrones beheading? A fine and possible suspension would probably be the result, so it won’t happen, but using the football as a sword and striking a kneeling teammate who would unstrap his helmet and let it roll on the ground like it was his… you get the picture.

3. The King in the North

A less graphic Game of Thrones celebration would be anointing a scoring player as the “King in the North.” They could stand in a corner of the end zone facing a group of kneeling teammates who would point non-existent swords and chant “The King in the North!” and perhaps the crowd would even join in for a stadium-wide chant. How awesome would that be, especially for a superstar player in the NFC North or AFC North in the cold of December?

Yes, Chad Johnson already pulled a golf putt off, but not like what I’m talking about here. Golf fans have seen their fair share of long putts, and it should be easy enough for an NFL player to hit an imaginary one from one side of the end zone to another. The player that scored would use the football as their putter and a teammate will act as his caddie on the opposite corner of the end zone and lift the pylon like it’s the flag inside the hole as the imaginary golf ball would be approaching, and then everyone would go crazy and as if he hit the shot. Timing and acting would be crucial here for the celebration to be great.

1. Hand the ball to the referee

This one has been allowed since the National Football League was formed. There is probably nothing cooler than simply handing the ball to the referee like you’ve been there before.