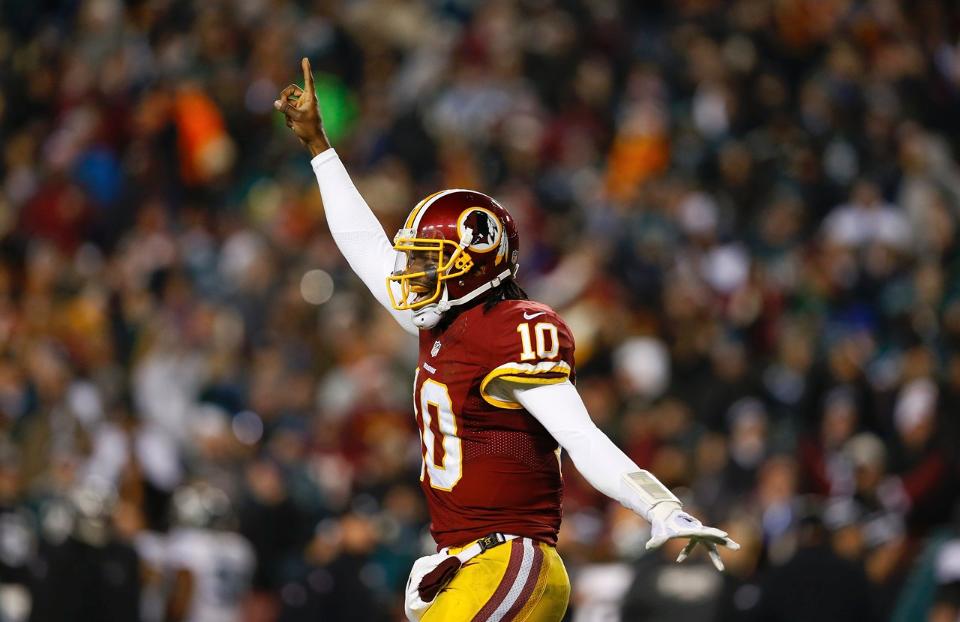 
NFL Network analysts Daniel Jeremiah and Bucky Brooks recently ranked their top quarterback prospects since 2012, so we decided to do the same. Here are their rankings:

How did we rank the former (and current) prospects?

Wentz would have been graded a couple points higher if his photographic memory was public knowledge before the Draft, but it just goes to show that it’s difficult to get a complete view of a prospect without the access NFL teams have. The biggest concern in Carson’s game was whether or not he could go through progressions at the next level, and while it’s still unclear if he has what it takes to become an elite starting quarterback, his rookie season showed promise.

A second round pick by the Raiders in 2014, Carr has proven to be a steal, and some would argue he’s the best quarterback drafted since 2012. Coming out of Fresno State, there were concerns about his transition into the league after playing in a spread offense, but his arm strength, intelligence, leadership, and other traits should have gotten him drafted in the first round.

The interceptions were the biggest concern for Winston coming out of FSU, as he showed at-times horrible decision-making in his redshirt sophomore season, but was able to bring the team back against less talented competition. A statistical jump didn’t happen in Winston’s second season in the NFL, and he will need to cut down on his 18 interceptions from 2016. Jameis has all the tools, but needs to make better decisions to be viewed as a high-end starter.

Some people don’t like to look at all the factors before prematurely labeling a player, but Goff had to deal with a relocation to LA, the team being on Hard Knocks, and a coaching staff that didn’t have the personnel to give the number-one overall pick a smooth transition to the league. If players were stocks, Goff would be a great buy-low right now; he is poised, accurate, has a strong arm, and perhaps most importantly, has a coaching staff that will make things easy for him.

It’s hard to believe that Teddy slipped to the end of the first round because of a sub-par Pro Day, but Bridgewater has proven to be a very good starting quarterback before his leg injury. Bridgewater proved he was a winner in college, and his pinpoint accuracy and high intelligence should have forced teams to overlook his stature and lack of a cannon arm.

The downfall for the player known as “Johnny Football” has been all off-field issues. Manziel showed he has the on-field ability to succeed in the NFL, but not taking the job seriously enough caused him to fall out of the league. If the player from Texas A&M could have kept his head on straight, Manziel would have been a force to be reckoned with for NFL defenses.

Here is the description for Watson in our upcoming overall prospect rankings:

This is going to be a long description, but Deshaun Watson deserves it. Watson is everything a franchise quarterback should be on and off the field, so why is he barely getting mentioned as a top-five pick? The Clemson legend combined to throw for 825 yards, seven touchdowns, and one interception in the two National Championship games against Nick Saban’s Crimson Tide defense, including the game-winning score this year to give Clemson their first title since 1981. He’s proven he’s a winner, and he’s certainly proven he shows up on the biggest stage. More importantly when projecting to the next level, he has a strong arm, is accurate, can read a defense, and is a great runner. The turnovers have been a big knock on Watson, but Jameis Winston was much more careless with the football in his final season at Florida State, and that didn’t stop him from being the first overall pick; Watson should absolutely be considered for the same honor.

We’ll have much more on Watson and all the 2017 NFL Draft prospects in the weeks leading up to the Draft at the end of April.

The top-three on this list were very, very close. RGIII is out of work right now, but he was truly a transcendent talent coming out of Baylor, and could have continued the success he enjoyed as a rookie if not for injury. Griffin could make throws from the pocket almost as well as he could shred a defense by scrambling to throw or simply taking off and making the defense pay for playing man-to-man. Inconsistency in Washington also didn’t help Griffin’s cause of sustaining success.

Mariota’s skillset seemed to translate to the NFL despite his insane numbers partly being credited to the Ducks offense, and Chip Kelly’s endorsement—comparing Mariota’s mind to Peyton Manning’s—of his former quarterback should have gave pause to the detractors of Mariota. The second overall pick in 2015 has proven his former coach and current team correct, as evidenced by his 45:19 touchdown-interception ratio through two seasons and the jump Tennessee made in his second season. The Titans should be set for at least 10 years with Mariota under center.

Widely regarded as the best quarterback prospect since John Elway, Luck had everything a team could dream of having in the face of their franchise—intelligence, accuracy, strength, athleticism, character, and more. Luck took a one-win Colts team in 2011 to the playoffs as a rookie in 2012, and would probably had more success if a better team was put around him. Indianapolis has a great chance at a Super Bowl in the near-future if new management can protect their superstar passer.