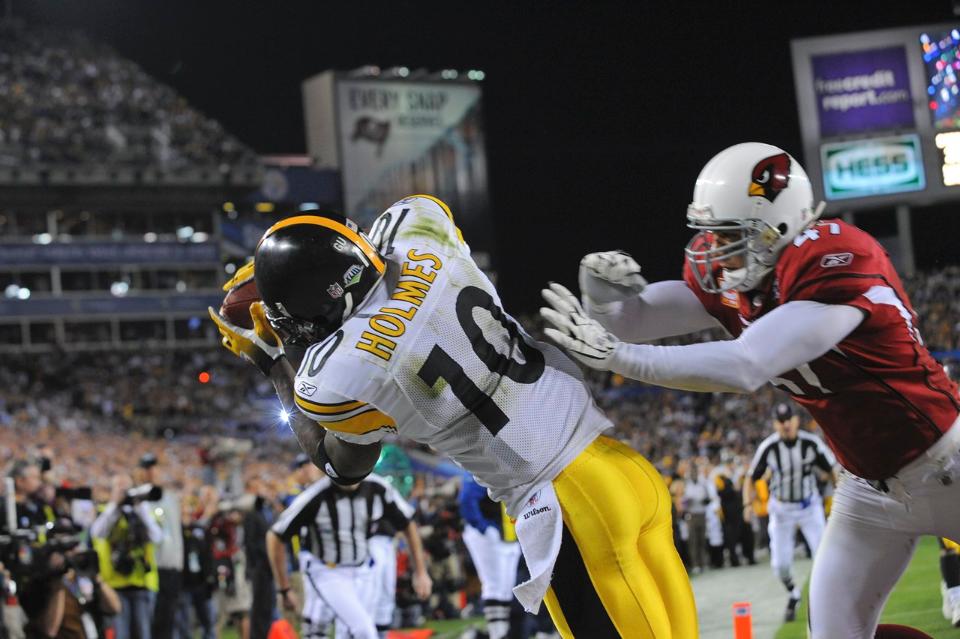 
Well, what better to do on Super Bowl week? Since, 2000, there have been some breathtaking games on the biggest sports day of the year. Which ones make the top ten this millennium?

The Patriots’ third Super Bowl victory in four years came as the Eagles tried to get their first ever Lombardi Trophy. Terrell Owens toughed it out for Philly, as he returned quickly from a broken leg to catch nine passes for 122 yards, but it wasn’t enough to beat New England. It’s a shame that Owens’ ego caused the next season to be his last in Philadelphia, and Donovan McNabb was never able to get a superstar like him to throw to again.

The score here was a bit closer than the game actually was, as Green Bay led wire-to-wire for the only Super Bowl win in the Aaron Rodgers era so far. The Packers started off hot with a 29-yard touchdown catch by Jordy Nelson, who was just a role player at the time; Jordy finished with nine catches for 140 yards and a touchdown. Pittsburgh made things interesting after trailing 21-3 with under a minute left in the first half, but 28-25 was the closest they were, and Big Ben couldn’t get a drive going with two minutes left and down six.

A young Tom Brady threw for just 145 yards in his first Super Bowl, but he showed the world he was clutch with a game-winning drive after the then St. Louis Rams tied it up at 17. Adam Vinatieri’s 48-yard field goal as time expired knocked off “The Greatest Show on Turf,” giving TB12 and Bill Belichick their first Super Bowl. Who would’ve guessed the duo would have won three more and are looking for their fifth 15 years later?

New England’s defense played a big part in the team’s first Super Bowl, but this was the game that Tom Brady proved he was one of the best after throwing for 354 yards and three touchdowns to win his second Super Bowl MVP in as many trips. Amazingly, wide receiver Ricky Proehl caught the game-tying touchdown for the Rams with 1:30 left in Super Bowl XXXVI, and caught the game-tying touchdown for the Panthers with 1:08 left in this game; both were erased by Adam Vinatieri kicks.

If you have Patriot-fatigue to this point, the top-five has three games that New England didn’t play in. But first, the second of the Giants’ victories over Belichick and Brady. The Pats were up 17-9 early in the second half, but they couldn’t find the scoreboard the rest of the game as the Giants chipped away. The most memorable part of the game was Eli Manning’s throw to Mario Manningham down the left sideline, but don’t forget that New England nearly had a last-second touchdown to win. Things might have been different on the final play (and whole game) if Rob Gronkowski was healthy, but Eli Manning bolstered his legacy with his second Lombardi.

A year after the Giants beat the Patriots, Ray Lewis and his Ravens did the same on their way to Super Bowl XLVII, the future Hall of Fame linebacker’s final game. This was the Harbaugh Bowl, as brothers John and Jim faced off on Super Bowl Sunday, with the older John getting the best of his fiery brother. In case you don’t remember, the Ravens jumped out to a huge 28-6 lead before the power went out at the Superdome. Whether that did it or not, the Niners got back in the game, having a chance to tie it with a two-point conversion with 10 minutes left. Then later, down five and with under two minutes in the game, Colin Kaepernick couldn’t connect with Michael Crabtree at the Ravens’ five-yard line, giving Ray Lewis a chance to end his career with another ring.

Doesn’t it just seem weird that a Super Bowl was played in January? The first 35 were actually played in the year’s first month. Anyway, The Greatest Show on Turf couldn’t beat New England in Super Bowl XXXVI, but they did win it all against Steve McNair’s Titans before that. Kurt Warner—who better make the Hall of Fame this year—threw for 414 yards and two touchdowns, but a 16-0 lead late in the third quarter still almost wasn’t enough; the Titans eventually tied it up at 16, before Warner hit Isaac Bruce for a game-winning 73-yard touchdown with two minutes to go. Even that almost wasn’t enough, with Kevin Dyson gaining nine yards on the final play, coming up one-yard shy of the goal-line for Tennessee.

New England broke all kinds of records in 2007, but New York’s pass-rush was too much for them as they attempted to go 19-0. Before the crazy throw by Manning to Manningham a few years later, there was the miraculous, desperation throw and catch connection with David Tyree, which set up the game-winning touchdown pass to Plaxico Burress a few plays later. And yes, big brother Peyton played in three Super Bowls that could have made the list, but last year’s Super Bowl 50 victory was the closest, and that was a 14-point win.

This game was an absolute classic. After winning an MVP, Super Bowl, and Super Bowl MVP in the early 2000s, Kurt Warner was a forgotten man, throwing barely playing and throwing for just 27 touchdowns from 2002 to 2006. However, taking over as the Cardinals’ starter in 2007, Warner had a career renaissance. He threw for 377 yards in Super Bowl XLIII, proving himself as one of the best performers in Super Bowl history, but James Harrison’s 100-yard return to end the first half and Santonio Holmes’ toe-drag touchdown catch with 35 seconds remaining in the game gave Big Ben and the Steelers their NFL-record sixth Lombardi Trophy.

If this list was every Super Bowl ever, the Patriots win two years ago would still probably be #1. Things were not looking good for New England after Doug Baldwin’s touchdown catch to go up 24-14, but Tom Brady did his thing in the fourth quarter. Against Seattle’s all-time great defense, Brady hit Danny Amendola for a four-yard score to cut the lead to 24-21 with under eight minutes to go. Then, a three-and-out gave NE the ball back, and Brady completed clutch pass after clutch pass, including the game-winning touchdown to Julian Edelman with just over two minutes to play. Malcolm Butler became a legend after that, intercepting a pass on the goal line with 26 seconds to go, giving the Patriots their first Super Bowl victory in a decade.