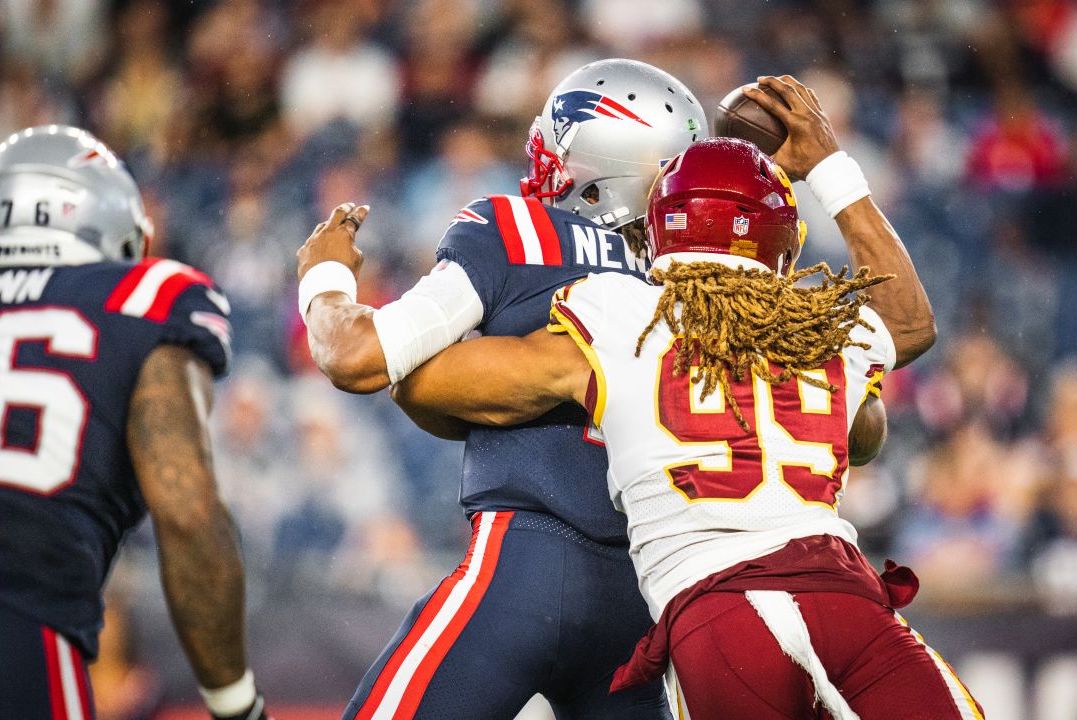 
The first full week of preseason action is completed, and there were plenty of takeaways from around the league. Here are five that I want to highlight.

New England ended up beating Washington, 22-13, but the first-team showing for Ron Rivera’s squad was encouraging on both sides of the ball. Defensively, Chase Young got to Cam Newton for a big sack, and last year’s No. 2 overall pick looks ready to go for a unit that’s only going to get better. On offense, Antonio Gibson was featured—alleviating any concerns about his toe injury from last season—while Taylor Heinicke showed well off the bench. As a whole, the NFC East looks tougher this year… but so does Washington.

After spending his rookie season as the emergency COVID quarterback in Buffalo, Fromm finally got a shot to show what he can do in game action, and he didn’t disappoint. Failing pass protection caused the first two drives to fall flat, but Fromm showed poise with a chance to win the game—hitting sixth-round pick Marquez Stevenson with a 45-yard deep ball on fourth-and-10 to eventually set up the game-winning field goal as time expired. The numbers game could lead to Fromm not making the Bills’ 53-man roster, but Atlanta or another team seeking a long-term answer would be wise to get the former Georgia standout in the building if he’s made available.

Although Teddy Bridgewater also played well behind him (and head coach Vic Fangio insists there has been no separation in the quarterback competition), Lock clearly seems to be the favorite to start in Denver. That appeared to be the case entering the weekend, and Lock played as well as possible by going five-of-seven for 151 yards and two touchdowns—including an 80-yard bomb to K.J. Hamler. The plan is for Bridgewater to start Game 2 of the preseason, but barring something spectacular, I’d expect the Broncos won’t waste much time afterwards before making a decision for Week 1.

Perspective on the rookie quarterbacks

No one wants to hear this because his game isn’t built for Twitter praise, but Mac Jones was arguably the most impressive first-year passer in my opinion—showing the accuracy, touch, and decisiveness that win at the NFL level. Of course, all the rookie quarterbacks showed flashes to be encouraged about (Trevor Lawrence throwing a frozen rope for his first completion, Zach Wilson delivering a strike over the middle on third-and-9, Trey Lance connecting on an 80-yard score with a perfectly placed deep ball, and Justin Fields using his speed and arm talent to make things happen), but some of the praise might be misplaced or too hyperbolic by those that watch the highlights or read the box scores.

Colts will be built around Jonathan Taylor

Most might not have been watching Panthers-Colts on a Sunday afternoon, but even more than strong performances by Jacob Eason and Sam Ehlinger, the biggest takeaway came from the Indy broadcast boost—with team owner Jim Irsay talking up Taylor as a “special” talent. Whether or not Carson Wentz (foot) is able to get healthy for the opener (and stay that way), the Colts should be in great shape if they feed Taylor, which we assume is something Irsay is hearing will happen from management and the coaching staff based on his comments.