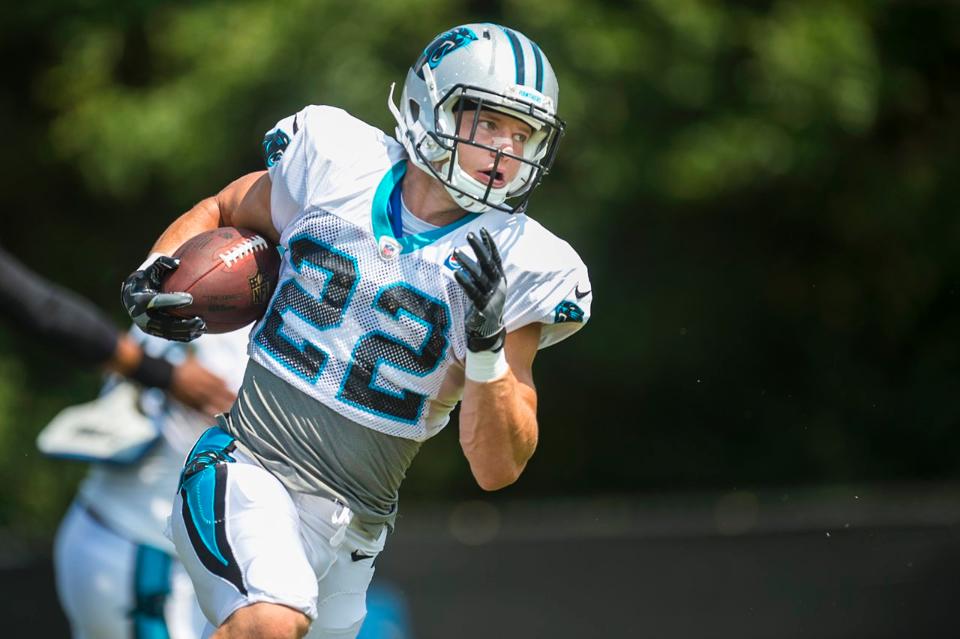 
Four weeks of preseason NFL games will begin Wednesday night, and football fans are lucky to have 22 of them (including 20 in the first three weeks) aired on NFL Network, ESPN, CBS, or FOX. Plus, everyone will have the broadcasts of their local team to watch, giving us plenty of action to hold us off until the real games begin. Here is the Week 1 preseason schedule with some things you should be watching for in each game—nationally televised or otherwise, as we will also get live look-ins on NFL Network for all 64 games throughout the preseason.

There are two huge reasons to watch this contest: Deshaun Watson and Christian McCaffrey. Fans will finally get their first look at two college superstars on Wednesday night, and it could be for a nice chunk of the game. Tom Savage will start at quarterback for the Texans, so Watson will potentially have around a half of football for himself. McCaffrey will see a lot of playing time as soon as the regular season kicks off, but he still might see extended playing time behind the veteran Jonathan Stewart. Both are electric players with high expectations in the league.

Miami has a new quarterback in the retired-no-more Jay Cutler, but he is just joining the team today and won’t play on Thursday night. I still want a look at offense after the rave reviews DeVante Parker has drawn this offseason. Whenever Cutler does step on the field, he will have a lot to work with in Parker, Jay Ajayi, Jarvis Landry, Kenny Stills, and Julius Thomas. We know Matt Ryan has some weapons of their own, and even in an exhibition, his team will likely come out ready to play after their Super Bowl LI loss.

Everyone wants to watch Dalvin Cook in action, and the rookie has a chance to run away with the starting running back job if he can have a big game against Buffalo. Another rookie I am watching is Bills cornerback Tre’Davious White, who I had as a top-ten prospect for the 2017 NFL Draft. White has apparently been extremely impressive at cornerback—both outside and inside—and could even get some run at safety because he’s proven to be so versatile.

With Joe Flacco still sidelined with a back injury, the Ravens need to find out what they have in backup quarterback Ryan Mallett. If he plays poorly, I think the team should go and get Robert Griffin III to be the new number-two on the depth chart. Baltimore is ready to contend, and while Flacco is fully expected to be ready for the regular season, back injuries could be tricky; I doubt they can win with Mallett. For the Redskins, rookie running back Samaje Perine is someone to watch.

Speaking of rookie running backs, Leonard Fournette is perhaps the one people are most excited to see in action. Fournette ran a 4.51 40-yard dash at 240 pounds, and he’s gotten that down into the 220s. Losing weight is almost always a benefit for running backs (and most positions, for that matter), and Fournette should be an absolute terror in the open field, especially for defensive backs who aren’t that interested in tackling. Fantasy football players should keep an eye on the Patriots running back rotation.

Carson Wentz had some definite mechanical flaws in his game at the end of 2016, but hopefully they are corrected and he can build a nice connection with his new weapons over the next three weeks. That will include a “reborn” Nelson Agholor, and it sounds like he is favorite to start in the slot for Philly. The defense for the Eagles better hope that Aaron Rodgers barely plays or doesn’t play at all, as him torching the cornerbacks wouldn’t be a great confidence booster for the group.

The Cleveland quarterback battle was one of my main things to watch in training camp, and it appears that Brock Osweiler is suddenly the favorite for the starting job after the team’s scrimmage on Friday; Cody Kessler and DeShone Kizer scored zero points against the second-team defense, while Osweiler did a nice job moving the ball against the first-team. I still like Kessler the best out of all three, and Hue Jackson said it remains a “fluid” situation. Also, will Adrian Peterson play for the first time in the preseason since 2013?

This is one of the better games of the week because we should have a reason to watch deep into second half, as two young quarterbacks will be opposing each other. 2016 first-round pick Paxton Lynch is falling behind Trevor Siemian for Denver’s starting quarterback job, so he will have to put on a solid performance to keep up, while the second-overall pick of this year’s draft, Bears quarterback Mitchell Trubisky, will probably finish the game behind Mike Glennon and Mark Sanchez.

The first of two NFL Network games on Friday night will give us a first glimpse at the Giants offense with Brandon Marshall. The six-foot-five receiver should be a great compliment to Odell Beckham Jr. and an immediate favorite in the red zone for Eli Manning. I’m also watching Wayne Gallman at running back for New York, plus Geno Smith and Davis Webb at quarterback. Pittsburgh probably won’t have Big Ben and Antonio Brown play much (if at all), especially with Le’Veon Bell still a no-show at camp. We will, however, see the next Watt in action with first-round pick T.J. making his NFL debut.

Tampa Bay doesn’t have a nationally televised game in Week 1, but they are on Hard Knocks, which premieres tomorrow night on HBO. Jameis Winston has as many weapons as anyone in the league, so Bucs fans are hoping for a step into the upper-echelon of quarterbacks in 2017. I’m most looking forward to seeing wideout Chris Godwin after he somehow lasted until the third round in the draft. Cincinnati is flying under-the-radar a bit, but they also stacked up on offense this offseason with John Ross and Joe Mixon.

Alex Smith will face his former team in the first exhibition of 2017, but the Niners look completely different than the last time they faced off in 2014. General manager John Lynch and head coach Kyle Shanahan are trying to build a long-term winner in the Bay Area, but it will take time. The Chiefs already have a contender, but they still moved up and drafted a quarterback in the first round. Smith will likely play a little bit before giving way to his eventual successor Patrick Mahomes II this Friday, and Mahomes big arm and unique play style is reason to keep watching.

The Jets rival the 49ers for the least amount of talent in the NFL, and I think they are the clear “winners.” New York is probably hoping for one of the handful of really good quarterback prospects next year, but Christian Hackenberg is still around and waiting for his first real-game action after he was a second-round pick a couple years ago. If he plays well this preseason, I think the team should hand him the reigns and see if he can be the answer. Corey Davis (hamstring) probably won’t play, but the Titans are an emerging team that should have some good players still out there in the second half.

I remember last year when the Cowboys and Rams played Week 1 of the preseason and the world was introduced to Dak Prescott. The rookie fourth-round pick completed 10/12 passes for 139 yards and two touchdowns—and made it look like the easiest thing in the world. His performance foreshadowed the end of the Tony Romo era and the beginning of the Dak Prescott era. Sometimes all a guy needs is a chance. This year, Prescott will likely see a series or two before relaxing on the sidelines the rest of the game. The quarterback on the other side of the field is what everyone should tune in this Saturday night for, as it will be cool to watch Jared Goff play in Sean McVay’s offense for the first time.

Oakland is probably one of a handful of top Super Bowl contenders, so they’ll likely play it safe with their new hundred-million-dollar man Derek Carr and some of the more important or older players, including Marshawn Lynch. The same will be true for the Cardinals, in particular Carson Palmer, David Johnson, and Larry Fitzgerald, who should see little-to-no time this week. Still, those who will be able to watch the local broadcasts should be pleased by the rookies on each side of the ball: Haason Reddick and Budda Baker for Arizona and Gareon Conley for the Raiders.

Game of Thrones watchers who feel like Sundays take forever are in luck, as the Lions and Colts exhibition should take up a chunk of the day. Detroit has a couple rookies in linebacker Jarrad Davis and wide receiver Kenny Golladay that I am interested in watching, but most of my attention will be on the Colts defense. First-round pick Malik Hooker will patrol the back-end of the secondary and was one of my favorite players in the draft, while second-round pick Quincy Wilson could start opposite Vontae Davis at corner.

The final game of the week will be the first for the Los Angeles Chargers. It would be better if seventh-overall pick Mike Williams (back) was healthy, as so far, the relocation hasn’t helped the poor luck the franchise has had in recent years when it comes to injuries. Hopefully Philip Rivers and the starters can get their work in without another player going down. For Seattle, the chemistry on the offensive line will be something to watch. I’m also curious about the support the Chargers will get from the fair-weather LA fans.