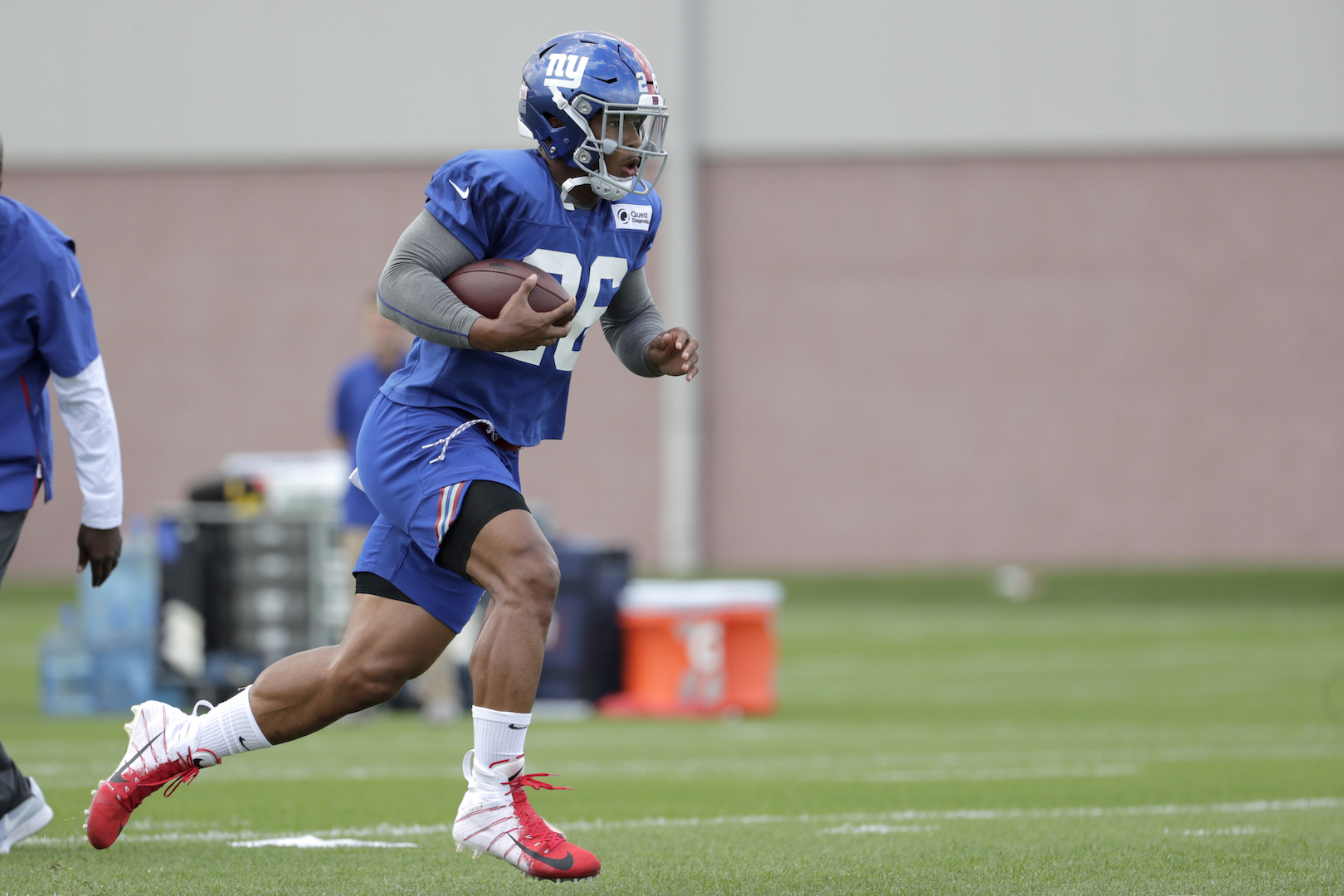 
A huge slate of NFL preseason action kicks off tonight with a whopping 12 games, and over the weekend, all 32 teams will finally see the field, with a handful of games being shown live on NFL Network. Plus, fans will have their local broadcasts to watch, and that combined with replays aired throughout the month will give us plenty of football to take in until leading up to the regular season. Here is the Week 1 preseason schedule and what I’m watching for in each game.

Baker. Barkley. Bears. Beets. Battlestar Gallactica. The top two picks in the 2018 NFL Draft sharing the field for their first NFL action is the biggest reason for NFL Network kicking off their preseason coverage with this game, as Baker Mayfield will be looking to silence some of the doubters, while Saquon Barkley might want to show Cleveland they made a mistake by not drafting him with the No. 1 overall pick. This is must-see TV for the star power, but both teams have several other intriguing players to watch, including New York’s third-round defenders B.J. Hill and Lorenzo Carter.

I think the Bills will probably let A.J. McCarron and Nathan Peterman split most of the first half before giving No. 7 overall pick Josh Allen most of the second half tonight, and he is the player I’m most looking forward to watching this month. We shouldn’t put too much stock into how guys perform—good or bad—in exhibitions, but I would bet Allen flashes some major potential with his all-world arm strength and the ability to make athletic plays in and out of the pocket. If he shows command of the offense and improved accuracy (which I think he will with a full offseason to work on his mechanics), Allen will be tough to keep off the field by the season opener.

Chicago made some great moves at wide receiver this offseason, including signing Allen Robinson and Taylor Gabriel, both of whom are listed as starters on the team’s depth chart. We should also see rookie Anthony Miller penned in at the slot, and Kevin White could be a wild card if he stays healthy and pushes Gabriel (who could be out tonight) alongside A-Rob. Plus, seventh-round pick Javon Wims was great in the Hall of Fame Game last week, and he could have the inside track for the No. 5 job. Overall, the Bears receiving corps is one of the positions that I’ll be watching closest in the preseason, but I think Robinson and Miller will separate themselves as potential difference-makers.

Of course, the defending Super Bowl champions taking the field in front of their home fans for the first time will be a sight to behold—even in a game that doesn’t count. However, Carson Wentz and Nick Foles both won’t play, and I think most of the key players will see little to no action for Philly. The same will probably be true for the Steelers, who are definitely going to be without Le’Veon Bell and Antonio Brown. Potential quarterback of the future Mason Rudolph should see quite a bit of playing time, though, even if he’s currently behind Landry Jones and Joshua Dobbs on the depth chart. For what it’s worth, I thought the former Oklahoma State star was a first-round prospect.

It’s an unofficial depth chart, but the status of Jacksonville’s wide receivers might be a little surprising with free-agent signing Donte Moncrief listed as a third-stringer behind Marqise Lee, Keelan Cole, Dede Westbrook, and rookie D.J. Chark. We should get some clarity tonight and throughout the next few games, but Moncrief might not be assured of a role this fall if the speedsters are all showing more consistency in camp. I’ll also be watching Cody Kessler closely, as I think he was dealt a bad hand with the Browns but could rebuild his value with the Jaguars.

Miami’s rookies will be the biggest draw for this matchup between Florida teams, as Minkah Fitzpatrick, Mike Gesicki, and Kalen Ballage should all have bright futures for the Dolphins. Fitzpatrick could be a key defensive cog early in his career as a versatile defensive back that could play in the box, line up as a single-high safety, defend players in the slot, or even go play outside cornerback, so we could get our first glimpse at his potential role tonight. Unfortunately, the Bucs will likely be without first-round pick Vita Vea due to injury, so big-play runner Ronald Jones will be bringing the excitement for them.

Rookie running back Derrius Guice will get his first chance to prove teams made a mistake in letting him slide to the end of the second round in the 2018 NFL Draft, and he could be carrying an extra chip on his shoulder since there was never even an explanation for it other than vague personality concerns. Guice is expected to be working behind Rob Kelley and Samaje Perine against New England, but some violent running against end-of-the-roster guys could allow him to vault up the depth chart. The pecking order for the Patriots backfield, receiving corps, and cornerback group will also be something to watch.

The Hall of Fame Game wasn’t a great start for Lamar Jackson’s professional career, but seeing improvement is what’s really important in training camp and preseason action. The dual-threat quarterback could be a little more comfortable after joint practices with the Rams this week, and LA’s defensive coordinator Wade Phillips obviously won’t be throwing the kitchen sink at Jackson in an exhibition. I also want to see Robert Griffin III again, as I thought he looked really good last week and still believe he can be a solid starting quarterback in the league.

The new-look Titans will take the field tonight under head coach Mike Vrabel, and they will not only have an updated offense, defense, and overall roster, but also some fresh threads. A matchup with Green Bay would be a really good regular season game, but in limited snaps tonight, I want to see how Marcus Mariota looks in Matt LaFluer’s versatile attack. For the Packers, rookie cornerbacks Jaire Alexander and Josh Jackson will try to make an impact and potentially work their way into the starting lineup by Week 1.

Some reports about Patrick Mahomes in training camp have been less than encouraging, but the second-year gunslinger seems like more of a “gamer” than practice player to me. If so, Mahomes could take advantage of extended playing time tonight as Andy Reid gets him fully prepared for the regular season. On the other side of the field, Deshaun Watson is apparently going to return from a torn ACL that cut his encouraging rookie season short, and you better believe he remembers Kansas City trading up for Mahomes over him in the 2017 NFL Draft. Hopefully Watson can knock off the rust and stay healthy this month.

I think Dak Prescott could see quite a bit of playing time for an established franchise quarterback, as the passing game needs to build chemistry with Jason Witten and Dez Bryant now gone. Rookie signal-caller Mike White is also a name to watch, as he could dice up some vanilla defenses and possibly move ahead of Cooper Rush for No. 2 duties at some point. Plus, it will be fascinating to see the re-shuffled secondary for Dallas with Byron Jones converting from safety to cornerback, which could give the Cowboys a long, rangy perimeter option that can be a real playmaker for the defense.

We haven’t seen superstar quarterback Andrew Luck since Week 17 of the 2016 season, so it will be great to see him finally back on the field after missing all of last year due to a slow recovery from shoulder surgery. Luck should have an exciting supporting cast with rookies Nyheim Hines and Deon Cain—not to mention No. 6 overall pick Quenton Nelson at left guard—headlining the new additions. Also, along with Hines for Indianapolis, we could see Seattle’s first-round runner Rashaad Penny make an impact on offense and in the return game, but all eyes will be on Luck for his return.

Josh McCown, Teddy Bridgewater, and Sam Darnold are all expected to suit up and play tomorrow night, so this quarterback battle will really heat up in a nationally-televised matchup against the Falcons. The 39-year-old McCown doesn’t have much to prove coming off a strong season, so it could be up to Bridgewater or Darnold to take the job from the veteran. I wouldn’t be at all surprised if Teddy plays lights out and wins the job, but a trade might be more likely so there’s a clearer path for the No. 3 overall pick to play in 2018. The biggest takeaway for those planning to watch this game tomorrow night is that a notable name will be in at quarterback for 60 minutes, which isn’t usually the case.

Tomorrow night is just a preseason game, but don’t tell Jon Gruden that. It will be awesome to see “Chucky” back on the sidelines for the first time since 2008, and Oakland’s starters could see more-than-normal playing time if he feels they need the work. The same could be true for Matt Patricia’s guys, as the new head coach has pushed them in practice to start his tenure. The preparedness of both coaches could make this one of the better games of the week, and I’m most excited to see Kerryon Johnson for Detroit and Marcell Ateman for the Raiders.

All week, Case Keenum has been saying the right things about this matchup with his former team, but there’s no way that he doesn’t feel at least a bit slighted after the team chose to target Kirk Cousins over him in free agency. Keenum probably won’t play much, though, and I don’t think Cousins will play much either due to injuries on Minnesota’s offensive line. Instead, the biggest matchup will actually be between teammates, as we should see Paxton Lynch and Chad Kelly battle for the backup quarterback job in Denver. Lynch will probably get first crack at it, but I think Kelly is going to end up the victor by the end of camp, and Saturday night will be a test for both of them.

It’s unclear if Sam Bradford will suit up against the Chargers as the team looks to keep him healthy for the regular season, so Josh Rosen could benefit from a start and perhaps an entire half to play. If so, we could be looking into the future for Arizona with Rosen and fellow rookie Christian Kirk forming a connection in their first NFL action. The focus for Los Angeles this weekend should just be keeping everyone healthy, but 2017 first-round pick Mike Williams will probably get to make some plays after missing a chunk of his rookie year.