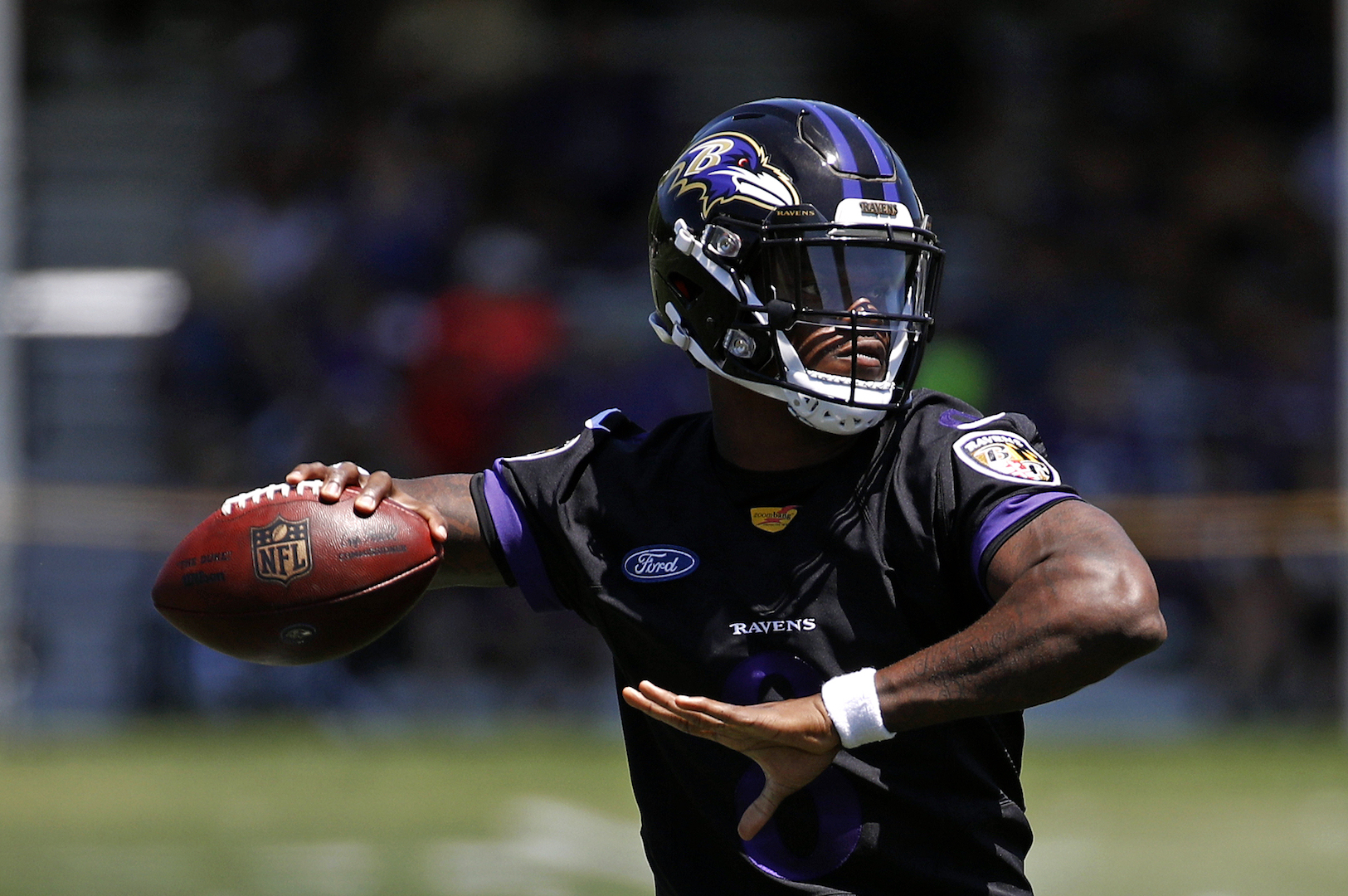 
It doesn’t hold a candle to the regular season, but tonight, NFL preseason kicks off with 11 games, and all 32 teams will hit the field over the next three days. Some matchups will be shown on NFL Network, and you can watch local games in your area or subscribe to NFL Game Pass to watch all 64 games this month.

No. 6 overall pick Daniel Jones will make his NFL debut tonight, but pay attention—or better yet, don’t pay attention—to what people on social media say after the performance. If he plays lights out, then “oh, it’s just the preseason,” but if he makes some mistakes, the negative mob that ripped New York for picking him in the top ten will go crazy with confirmation bias. For me, Jones was an easy first-round prospect that looked better and better the more I watched him, and an exhibition won’t define his career.

Buffalo has maintained that LeSean McCoy will be a big part of their backfield in 2019, but head coach Sean McDermott said that Frank Gore will start the preseason opener, while McCoy will be rested and start the second game. That could just be a case of the team knowing what they have in a guy that’s been their starter for the past four seasons, but they don’t know what they have in Gore (arguably the most dependable back of his generation)? I’m not buying it until we see McCoy on the roster in September.

With Robert Griffin III (thumb) out, sixth-round pick Trace McSorley has a big opportunity to prove he should have been respected more as a quarterback prospect earlier this year, and he should be ready for the challenge in his first game action. I remember immediately feeling the “it” factor for Dak Prescott in his preseason debut back in 2016, and McSorley has some of the same qualities that made him such a winner at Penn State.

Tennessee definitely won’t have first-round pick Jeffery Simmons (knee) and probably won’t have second-rounder A.J. Brown (hamstring) or third-rounder Nate Davis (undisclosed) tonight, so Philadelphia will have all the rookies worth keeping an eye on. So far, all the buzz has been about Miles Sanders, but I’ll be closely watching how No. 22 overall pick Andre Dillard holds up at left tackle, especially if he gets some reps against emerging pass rusher Harold Landry.

It’s rare to get a high-profile quarterback that’s not a rookie see extended action in the first preseason game, but we can probably expect quite a bit of playing time for Josh Rosen, which makes this game one of the best of the week. I viewed him as a second-round prospect, but Rosen seemed like the No. 1 or No. 2 quarterback of the 2018 class for most analysts, and Arizona was obviously high enough on him to trade up into the top ten. Just looking from the outside, he needs to make significant strides as a leader to rebuild his value.

We don’t know if the starters will be playing for a lot of these games, but if Kerryon Johnson does, the Patriots—even if the backups are in—may be determined to get some early stops because of what the Lions did to them last September in a 26-10 victory in which Johnson ran for 101 yards. The New England backfield is also worth watching with rookie Damien Harris making his NFL debut, but overall, those paying attention for fantasy purposes will probably have to wait until the third week to get any clarity.

This would be a lot better if it were Week 1 of the regular season to see Odell Beckham Jr. versus arch nemesis Josh Norman for 60 minutes (the kicking net doesn’t count), but hopefully we at least see the Cleveland starters for a series or two in Freddie Kitchens’ head coaching debut. I think it’s important for the Browns to build some momentum this month to avoid a slow start in September. As for the Redskins, all eyes will be on Dwayne Haskins

Green Bay also needs to start strong this season to avoid any further tension between Aaron Rodgers and new head coach Matt LaFleur (though it’s basically been passive-aggressively one-sided coming from the quarterback), but the offensive stars aren’t expected to suit up. Instead, I’ll be paying close attention to first-round defenders Rashan Gary and Darnell Savage, as the defense could be great for years to come if they become stars alongside Jaire Alexander, Frank Clark, and Adrian Amos.

The backup quarterback job between Kyle Allen, Will Grier, and Taylor Heinicke could be really important if Cam Newton still has shoulder complications this season, but hopefully they are behind him. Either way, the defense is what will be key in getting Carolina back into the NFC’s elite, and I like their switch to a 3-4 front. Keep an eye on No. 16 overall pick Brian Burns off the edge.

The Broncos starters are going to play tonight, but how much will they reveal on both sides of the ball? We know the defense will be great under head coach Vic Fangio, so it’s encouraging to hear that the offense has actually caused some frustration for Denver defenders in practice because a lot of pre-play motion and different looks. In the second half, Drew Lock will try to bounce back after an uneven performance in the Hall of Fame Game.

No. 1 overall pick Kyler Murray will be must-see TV for as long as he’s on the field tonight, but more than any other team, I think new head coach Kliff Kingsbury wants to keep his offense under wraps until the games count. Fortunately, we should see rookie wideouts Andy Isabella and Hakeem Butler—both of whom I expect to be better with real reps—play into the second half for those on the east coast who stay up until midnight to watch.

I wanted to see the new Tampa Bay defensive line together on Friday night, but Vita Vea (knee) won’t play, and Ndamukong Suh probably won’t either. However, the Buccaneers have several young defensive backs to watch, and they will get a good challenge from a deep Pittsburgh receiving corps. James Washington is said to be behind Donte Moncrief as the Steelers’ No. 2 receiver, but things could certainly change after a couple exhibitions.

Vikings versus Saints would have a lot more appeal if they didn’t already have their NFC Championship Game rematch last year, but the rookies on both sides should bring some excitement. Minnesota went offense with their first four picks of the 2019 NFL Draft (C Garrett Bradbury, TE Irv Smith Jr., RB Alexander Mattison, and G Dru Samia), while the Saints picked up their new starting center in Texas A&M’s Erik McCoy with a top-50 selection.

I’m definitely going to be watching this game on NFL Game Pass, but the LA starters aren’t expected to play at all in the preseason, and Oakland may decide that their joint practices were enough work for their own first-team guys. If it’s mostly backups on the field, watch outside linebacker Ogbonnia Okoronkwo and running back Darrell Henderson for the Rams, and wide receiver Marcell Ateman for the Raiders.

The Bengals cannot afford any more significant injuries after already losing left tackle Jonah Williams for the season and superstar receiver A.J. Green for multiple weeks, so getting through the weekend healthy should be the priority. The Chiefs, on the other hand, already have a high-powered offense that doesn’t need much work, but the defense should see at least a couple of series as they switch to a 4-3 front under defensive coordinator Steve Spagnuolo.

A classic NFC rivalry ends the first week of preseason action in the league’s 100th season, and this will be our only chance for a Cowboys-49ers matchup unless they face off in the playoffs. There should be some really good backup quarterback play between both teams on Saturday night, but don’t expect to see any of the big names suiting up, especially since No. 2 overall pick Nick Bosa (ankle) has been ruled out for the preseason, and Ezekiel Elliott is still holding out.