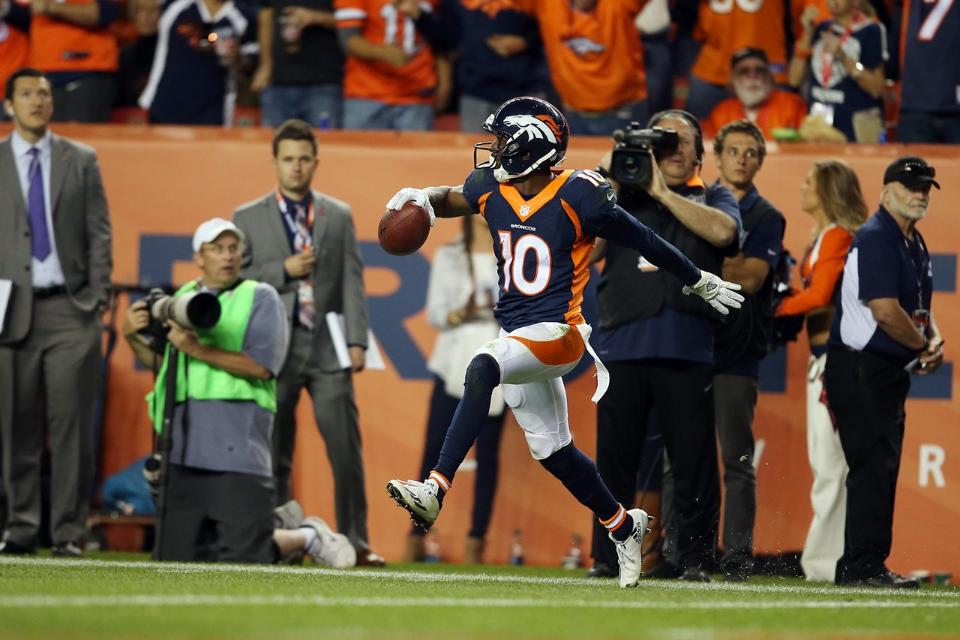 These two teams are very similar in that they want to run the ball; the Titans with veteran DeMarco Murray, and the Bears with rookie Jordan Howard. Murray already has 1,000 yards this season, but Howard is on his way there, as the 2016 5th round pick is averaging 5.2 yards per carry, which is second to only Jay Ajayi (5.6) among running backs. Say what you want about Jay Cutler, but there’s no denying he gives the Bears a better chance to win than Matt Barkley, who will be under center for Chicago the rest of the year with Cutler out. Barkley won’t have much to work with since Alshon Jeffrey is suspended, so he won’t be able to match whatever Marcus Mariota does across from him.

Ah Jacksonville. The Jags have been in some games against some good teams this season, but it’s only translated into two wins so far. Along with the Raiders, the Jaguars were predicted by many to take a huge step; the Raiders did it, and are opposite from Jacksonville’s record, an AFC-best 8-2. The Bills were predicted by many to not be very good this season, but they are right in the playoff hunt, and getting healthier with Sammy Watkins (foot) possibly returning this week. Buffalo, playing at home, should handle the turnover-happy Blake Bortles.

At 3-6-1, this is an absolute must-win for the Bengals season and probably head coach Marvin Lewis’ job. Their chances of winning aren’t very good with A.J. Green (hamstring) out and Giovani Bernard (knee) done for the year. Rookie wideout Tyler Boyd will have to be better than he was last week when he caught six passes for 54 yards and a touchdown, as Baltimore’s #1 run defense should have no trouble stopping Jeremy Hill. Joe Flacco should be able to find Steve Smith Sr. and Mike Wallace against the porous pass defense of the Bengals.

Coming off a bye week, Atlanta should be ready for the Cardinals, who are coming off a loss to the Vikings that put Bruce Arians in the hospital with chest pains. Thankfully, the Cardinals head coach is okay and will be coaching this Sunday. We should have a shootout on our hands this Sunday with Atlanta sure to score points, and the Cardinals set-up for success against the Falcons defense—a unit allowing an NFC-worst 23 pass touchdowns this season. Julio Jones is sure to see Patrick Peterson a lot, but it won’t matter. Before their last meeting, PP21 talked trash and Jones roasted him for nearly 200 yards; don’t think Julio forgot.

This is the week the Browns get a win. Cleveland has five more chances to not finish winless, and at home versus the overachieving Giants is a great spot. At home over the past two weeks, New York was won by a combined seven points against two teams with five wins between them (Bengals and Bears). Now on the road, this is a classic trap game as they look ahead to the Steelers and Cowboys. At 7-3, the Giants seem well positioned for a playoff spot, but a collapse could be coming. With RGIII nearing a return for Cleveland, the 37-year old Josh McCown could be making his final career NFL start; I expect him to leave it all on the field this Sunday.

The Saints lost a tough one last Thursday against the Panthers to fall two games back in the division, but they’re still right in the NFC South race. The Rams on the other hand, blew a 4th quarter lead last week in Jared Goff’s first NFL start. They refused to let Goff let it loose, as the first overall pick threw just five passes more than 10 yards downfield, with most coming very late as they tried to comeback; against Drew Brees in New Orleans, that number will need to jump if the Rams have any chance of winning. With the Saints defense improving, it might not be too easy for Goff to move the ball.

The Niners have lost nine in a row since their Week 1 shutout victory, but they’ve shown some good things over the past couple weeks. After a stretch of historically bad run defense, San Francisco played a lot harder against the Cardinals and Patriots, and they were right in both games. For anyone that doubts if Chip Kelly is an “NFL coach,” the legendary John Madden said in a recent interview with The Mercury News about Kelly, “I’m impressed with him” and “I really respect what he’s done.” Madden also said how the Niners have so little talent, saying “he’s a good coach in a bad situation.” Before people write off Kelly, remember, Jimmy Johnson was 1-15 in his first season with the Cowboys. All that being said, the red-hot Dolphins have won five in a row and are in the playoff picture; this will be a close game, but Miami is on a roll right now.

Houston nearly got a big win against the Oakland Raiders in Week 11, losing 27-20 on Monday Night Football. Brock Osweiler wasn’t great, but he wasn’t terrible either, despite some bad mistakes. The formula for success was apparent last week when the Texans fed Lamar Miller with 24 carries, keeping the game close and Derek Carr off the field; the same needs to be done against Philip Rivers for Week 12. Rivers and the Chargers come off a bye and Melvin Gordon should have fresh legs after a heavy workload in the first half of the season. San Diego needs a win here to stay in the picture for a wild card spot in the AFC.

Quietly 5-5 and a game back from the Falcons, Tampa Bay gets a tough draw with the Seattle Seahawks on Sunday. Playing at home should help, but the Bucs do not matchup well with Seattle; Richard Sherman should take care of Mike Evans, and there are no real threats outside of Evans for the Tampa offense, especially with Doug Martin knocking the rust off from his hamstring injury. The Seahawks look well-positioned for a top-two seed in the NFC, and are getting key players back, as Thomas Rawls will now be the workhorse in the backfield and Michael Bennett could return soon. Bennett will be out this week, but they probably don’t need him to beat the Bucs.

Touchdown Tom continued his reign over the league with his four-touchdown performance last week in a win over his hometown 49ers; Brady is completing over 70% of his passes and has a 16:1 touchdown-interception ratio this season. The Jets are going back to Ryan Fitzpatrick at quarterback after experimenting with Bryce Petty, but it doesn’t matter who is quarterbacking for New York against Belichick and the Pats. New England will dominate the middle of the field with Julian Edelman and Martellus Bennett, plus Rob Gronkowski (chest) if he’s able to play.

Carolina saved their season last week with a win against the Saints, and are now just two games back in the NFC South, while the Raiders got a close win over the Texans and sit atop the AFC West with Kansas City and Denver right behind them. Michael Crabtree uncharacteristically struggled holding onto the football last week in Mexico, but he should be better this week against the inexperienced Panthers corners; on the other side of the formation, Amari Cooper should absolutely dominate. Because of Luke Kuechly’s absence (concussion), the Panthers defense looks a lot softer, which is good news for Latavius Murray and co. Cam Newton is going to have to play like the MVP he was a year ago for Carolina to move to 5-6.

Flexed into the Sunday Night Football slot, Chiefs and Broncos should be a great game, with first place in the division potentially on the line. The Chiefs missed Jeremy Maclin last week at home when they lost 19-17 to the Bucs, and will be without the star receiver again on Sunday night—bad news for their chances against a healthy Broncos defense. Trevor Siemian has Denver at 7-3, but they need to get rookie Devontae Booker and the running game going if they want to be playing late into the postseason. I think they will for this week at least; no Maclin is the difference.

I said people should “R-E-L-A-X” after Green Bay’s struggles early in the season, and they turned it around—only to fall back off, losing four in a row. The Packers utilized Ty Montgomery as their lead back when they were having success, and went away from him when he was injured. I’ve said it a thousand times, they need to give Montgomery most of the snaps at running back for their best chance of winning. This week that is especially true, as the Eagles struggle against dual-threat backs. Carson Wentz hasn’t been helped by his receivers, but he hasn’t been great himself recently. Fortunately for him and the Eagles, Green Bay has a very… generous secondary. The Philadelphia defense has been great at home, allowing less than 10 points per game, but their corners are flat-out not good, and I can’t see Aaron Rodgers allowing the Packers fall to 4-7.