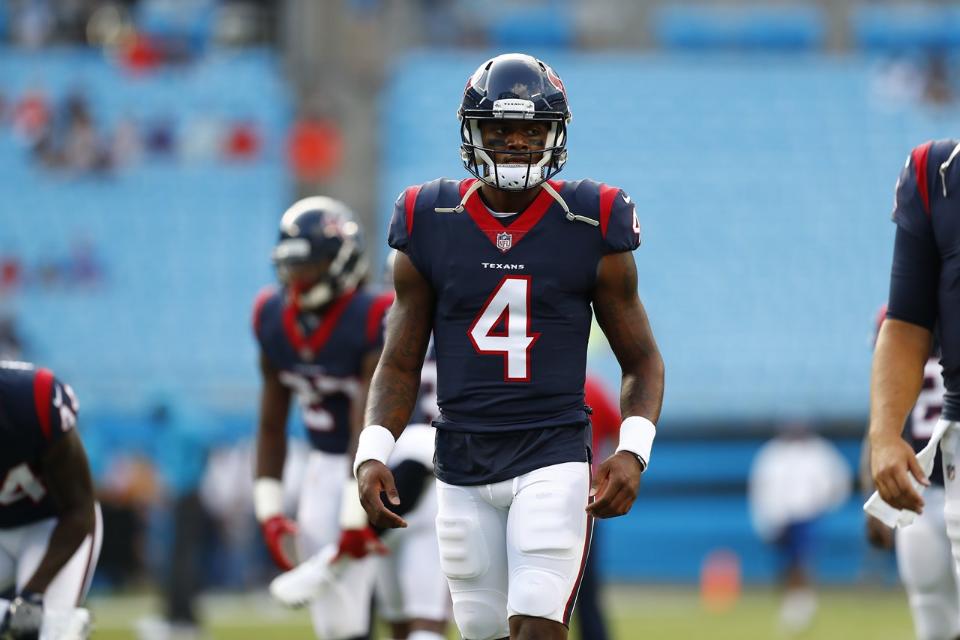 Not even a week after being traded by the Buffalo Bills, cornerback Ronald Darby will get a chance to play an exhibition against his former team. Still learning the defense, Darby probably won’t be out there too long, but fans are looking forward to seeing him in midnight green. Jordan Matthews (chipped sternum) won’t get a chance to compete against the Eagles, though.

The Dolphins new starting quarterback will suit up tonight against the Ravens, and it will be a good test against an elite defense. Adam Gase will likely try to give Cutler a lot of simple reads/throws to get comfortable with his teammates—and get his teammates confident in him.

An actual game is the only reason to watch ESPN nowadays, and the network has two of them this week, starting with the Bucs and Jags tonight. Anyone with an HBO subscription who is a football fan should be watching Hard Knocks, which features Tampa Bay this year, and I will be watching rookies O.J. Howard, Chris Godwin, and Riley Bullough in their game this week.

Fantasy football owners have a great reason to spend their Friday night watching the Vikings and Seahawks on NFL Network, with both teams having running back battles that will be won on the field. Eddie Lacy fell behind Thomas Rawls in Week 1 of the preseason, so he will try to play his way back with the starters. For the Vikings, Latavius Murray is finally healthy and will try to make rookie Dalvin Cook wait in the wings for the lead-back role.

The eighth-overall pick looked great in his NFL debut, mixing in with Jonathan Stewart and the first-team offense to rush seven times for 33 yards. He didn’t catch any passes, and that’s what I will be watching on Saturday, because we know McCaffrey is just as deadly as a receiver as he is a runner.

Reason to watch: Patrick Mahomes with the second-team offense

Mahomes was 7/9 for 49 yards and a touchdown in his first NFL action, but he played behind both Alex Smith and Tyler Bray last week. His performance in the game and practice earned him a promotion, and the rookie will look to make the most of his opportunity with the second-team offense. It should be noted that Alex Smith—arguably the most underrated quarterback in the league—has no reason to fear for his job, but Mahomes is an exciting player nonetheless.

Speaking of exciting players, Jaylon Smith might have been the best player in the entire 2016 NFL Draft before his devastating leg injury in his final game at Notre Dame that caused him to fall to the second round. Smith persevered and will return to the field on Saturday night, and I think all NFL fans should be pulling for the guy to stay healthy and have a successful career.

Those writing off Hackenberg need to give him time to develop. The former Penn State quarterback is still just 22-years-old (more than two years younger than Carson Wentz), and the Jets knew he was going to be a project when they drafted him. Hackenberg fumbled twice in the preseason opener, but he did complete 72% of his 25 passes for 127 yards and no interceptions. We’ll see what kind of adjustments he made for Detroit this week.

Ty Montgomery (leg) is unlikely to play on Saturday, so rookies Jamaal Williams and Aaron Jones will have a chance to make an impact with the first-team offense for Green Bay. The Redskins need their rookie back Samaje Perine to be better after he lost a fumble in his debut, because Jay Gruden won’t play guys he can’t rely on to take care of the ball.

Like Christian McCaffrey, Deshaun Watson is reason enough to watch this game. Watson was extremely impressive against the Panthers as both a passer and a runner, and he displayed good command of the offense. Of course, Tom Brady and his new weapon Brandin Cooks will be fun to watch, too, making this easily the most intriguing game of the week.

Reason to watch: Paxton Lynch tries to capitalize on a start

Broncos head coach Vance Joseph had a plan all along to start Trevor Siemian in the first preseason game and Paxton Lynch in the second one, and he’s sticking to it after neither stood out last week. Lynch, a first-round pick in 2016, has a higher ceiling for Siemian, but starting him when he’s not ready and then replacing him in the regular season could kill his confidence. I think he has to play really well to be named the starter. After all, Trevor Siemian quietly had a really solid season last year.

This is supposedly a “redshirt” year for Trubisky, but NFL teams aren’t going to sit their high draft picks when they give them the best chance to win. I’m not saying Trubisky does that, but John Fox could be coaching for his job and will want to play whoever makes the 2017 Chicago Bears successful. Mike Glennon went 2/8 with an interception in the preseason opener.

Reason to watch: Sammy Watkins in a Rams uniform

I think the Rams got a steal in trading for Sammy Watkins, as they give their franchise quarterback a legitimate #1 wide receiver, whom—despite entering his fourth season—celebrated his 24th birthday just two months ago. When he’s on the field, there is no doubt that Sammy is an elite wideout, and he and Jared Goff will try to build some chemistry against the Raiders.

Everyone knows the Falcons and Steelers have high-flying offenses, but both franchises also have a good crop of young defenders, including the Steelers’ first-round pick T.J. Watt, who recorded two sacks in limited action last week. I wouldn’t be surprised if this turned out to be a Super Bowl LII preview with all the talent on both sides of the ball for both teams.

Philip Rivers drove his guys down the field against Seattle’s first-team defense last Sunday, and he will look to do the same this week against New Orleans. Los Angeles is a definite worst-to-first candidate, despite playing in the tough AFC West. Rivers might have the best supporting cast of his career if Mike Williams can get healthy sometime during the regular season.

Cleveland’s starting quarterback battle was my headliner of things to watch this preseason, and a national audience will get a chance to see for themselves who should win it. I am baffled as to why Hue Jackson won’t give Cody Kessler a fair chance to win the job, as he only got part of the second quarter while Brock Osweiler played into that quarter and DeShone Kizer got the entire second half to himself. And now, after a poor showing by Osweiler, Jackson has decided to start him again and has pushed Cody Kessler to third string duties. All signs point to Kizer starting the third preseason game (and Week 1) with Osweiler unlikely to move the ball against the Giants first-team defense and Kessler seemingly out of contention. All three will just do the best they can to hopefully earn the job.