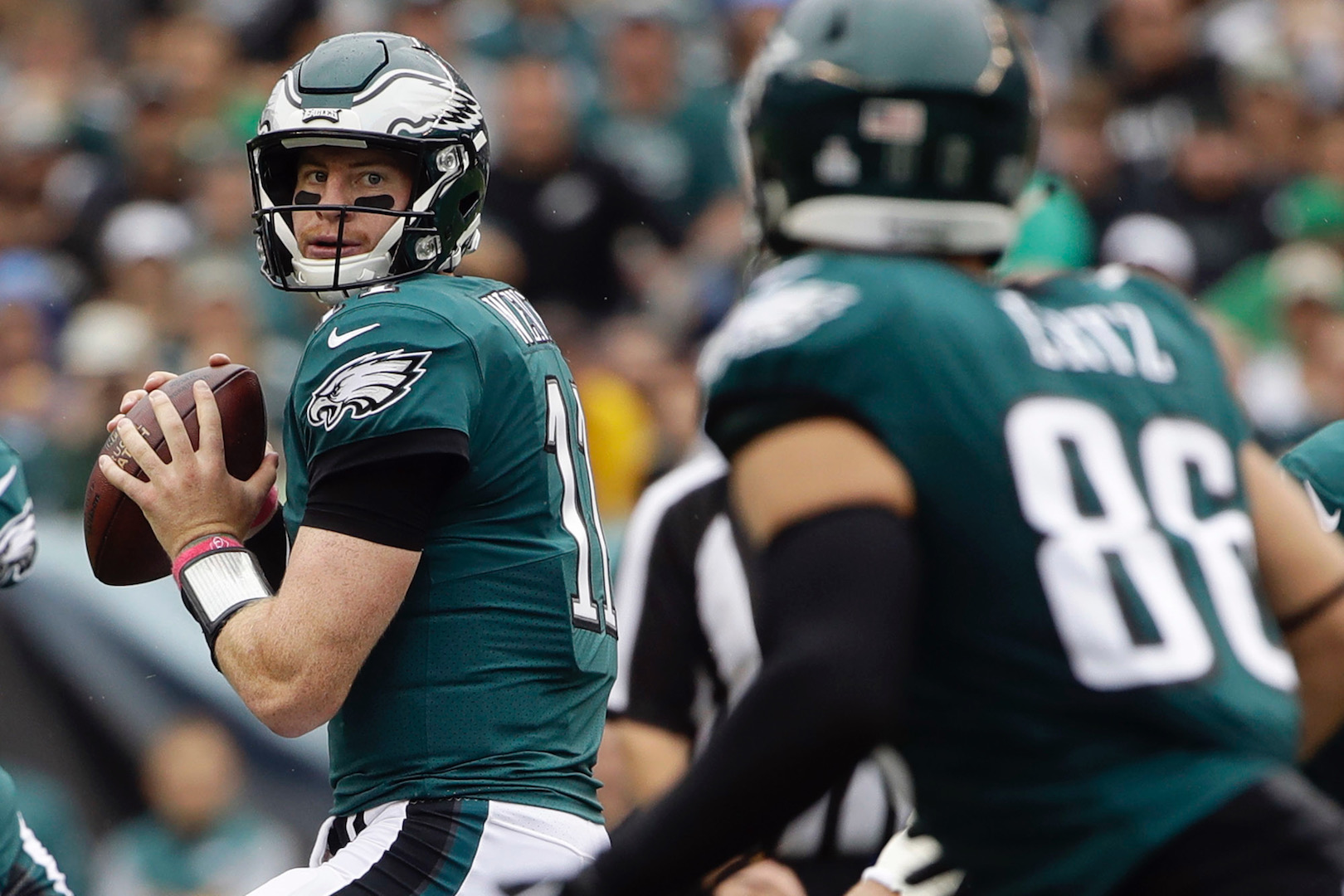 Rookie cornerback Deandre Baker (knee) may not suit up tonight, but in general, I’m excited to see New York’s first-team defense in action for an extended period of time. Including Baker, the Giants have several new starters, and they should all be upgrades on a unit that could surprise people in 2019. The front three in particular—Dexter Lawrence, B.J. Hill, and Dalvin Tomlinson—will be difficult to run against, so this is a great test for Cincinnati’s banged-up offensive line.

Washington’s plan is to get Derrius Guice (knee) some touches for the first time since tearing his ACL last summer, which is a good sign for what has been a prolonged recovery to this point. When the regular season begins, the Redskins are going to want to shorten games and take care of the ball to have any chance of competing in the NFC East, and getting Guice back to pair with Adrian Peterson would be huge. On the other side of the ball, it’s been refreshing to see Matt Ryan play quite a bit while the rest of the league mostly rests their stars.

Will Cam Newton’s newer, quicker throwing motion finally be revealed tonight? He is said to be healthy, but those picking Carolina as a Super Bowl contender would probably feel a lot better if they see Newton play some before the games count. Also, while we shouldn’t read too much into preseason usage, I’m interested in how Curtis Samuel and D.J. Moore will be utilized when Cam is at the controls. For New England, this is likely the game where we could see Tom Brady for at least a half.

Because of injuries that have already befallen the quarterback position and caused the Eagles to sign Josh McCown, head coach Doug Pederson may hold Carson Wentz out again and use the we-got-enough-work-in-joint-practices excuse, which would be understandable. However, it would be nice to see Wentz play at least for a couple of series so he doesn’t go into the regular season cold, and even limited playing time would give fans (and fantasy owners) a clearer view of the offense.

Based on his comments in a coaches meeting during this week’s Hard Knocks, Jon Gruden isn’t going to play Derek Carr for Oakland’s trip to Winnipeg, but perhaps the team wants to get Antonio Brown (feet) healed up before giving all the starters some playing time in the preseason finale (which is rare, but happens). The biggest draw for this week’s game Aaron Rodgers hopefully debuting in Matt LaFleur’s offense, and if he plays, you can be sure the Raiders will want to get after him like they did Kyler Murray.

Miami’s quarterback competition will ideally be decided tonight to allow Brian Flores’ squad to make a decision and go forward, so there will be a decent amount of pressure on Ryan Fitzpatrick and Josh Rosen for a preseason game. That said, I could see Fitzpatrick in particular reveling in the opportunity to face Jacksonville’s first-team defense—who themselves will be looking to put on a good performance and rebound from 2018—so this should be a fun matchup to watch.

The more Cleveland players talk, the bigger the target on their back will get, and while I would say they should all take a page out of Nick Chubb’s book by simply putting their heads down and going to work, the hype has already spiraled out of control. Getting off to a strong start in the regular season will be key, and Friday night against the Buccaneers is a perfect draw as practice for potential shootouts in September against the Jets (MNF) and Rams (SNF) in back-to-back weeks.

Yes, it’s only the preseason, but no one wants to talk about how good Josh Allen has looked in limited action through two games. Buffalo doesn’t even have all their starters playing, but Allen has shown pinpoint accuracy and precision, especially on underneath throws to Cole Beasley. If the success continues this weekend and into the regular season, the Bills will be scary. Detroit won’t be an easy opponent, but I think that’s a positive.

Everyone is losing their minds over the ineffectiveness of Arizona’s offense last week, but as someone that isn’t sold on Kliff Kingsbury being successful in the NFL after 35-40 record at Texas Tech, the panic is unwarranted. For those who didn’t watch the entire game last week, Larry Fitzgerald was interviewed around the two-minute warning, and he said they have revealed basically nothing, and the exhibitions are the only time the offense has actually huddled (as opposed to practice, where they routinely snap the ball with 25 seconds remaining on the play clock). We should see an increased pace in the “dress rehearsal.”

Jerry Jones’ “Zeke who?” quip seemed to drive a bigger wedge between the Cowboys and their superstar running back, so this weekend could be hugedepending on what fourth-round pick Tony Pollard does after turning six touches into 51 yards and a touchdown last week. I would trade Elliott—who should have zero leverage with two years remaining on his contract—if he decides to hold out into the regular season, and Dallas may very well look into that knowing they still have to pay Dak Prescott, Amari Cooper, and Byron Jones.

There are fortunately six games on Saturday night, but it’s still disappointing that neither the Bears nor the Colts will be playing their starters in what would have been an entertaining exhibition. On the bright side, players on the roster bubble will get more snaps, and at least Indy quarterback Chad Kelly will bring some added excitement. The bigger story than what happens on the field is Andrew Luck’s health and whether or not he is named the team’s Week 1 starter.

The third week of the preseason is when fans get a chance to see the starters in extended game action, but I’m just as interested to see how Teddy Bridgewater performs for Saints-Jets. Last week, Teddy really struggled, and it will be important for him to put some quality play on tape to potentially earn a starting job in 2020. If Drew Brees (rest) is held out again, Bridgewater will get a chance to roll with the starters against a New York defense that could have some major issues on the backend.

New Orleans won’t be too worried if Bridgewater struggles again on Saturday, but the same cannot be said for Jimmy Garoppolo and the Niners. Confidence looked like it may have been an issue for Jimmy G when he went one-of-six for zero yards and an interception in his first game action since tearing his ACL—and the performance is doubly concerning after he threw an interception on five straight plays in practice last week. Perhaps a shootout with Patrick Mahomes (who should play into the second half) is just what the doctor ordered.

Bears-Colts isn’t the only game this weekend to have little to no starters playing, as the Rams—per usual—won’t be playing their guys, and it sounds like Denver will follow suit. With Drew Lock (thumb) out, the watchability really takes a dive, but fantasy owners can maybe get some insight on the potential role for LA’s third-round rookie Darrell Henderson—if he barely plays, Henderson’s role could be bigger than expected in the regular season… and if he plays a lot, it’s another reason to believe Todd Gurley is healthy.

The Chargers’ stingy secondary will be an excellent test for Seattle’s receiving corps, as with D.K. Metcalf (knee) out until the regular season, they are looking for guys to step up alongside Tyler Lockett out of the veterans (David Moore, Jaron Brown, Malik Turner) or the other rookies (Gary Jennings, John Ursua, Jazz Ferguson). I was high on Jennings coming out of West Virginia, but his transition has been a little rocky after playing in a simple spread attack, so we’ll see if everything can click.

Unless offensive centerpiece Derrick Henry is held out until the regular season, Tennessee may finally have their new-look offense at full strength to close out the third week of preseason games, which is exciting. The Titans don’t have an established star at receiver, but they expect former fifth-overall pick Corey Davis to be that guy, and personally, I think A.J. Brown will be a top-flight WR1 in the league. Everything will run through Henry, though, and the play-action passes could be deadly if Marcus Mariota is on his game in 2019. Sunday night will be a great battle against an emerging Pittsburgh defense.