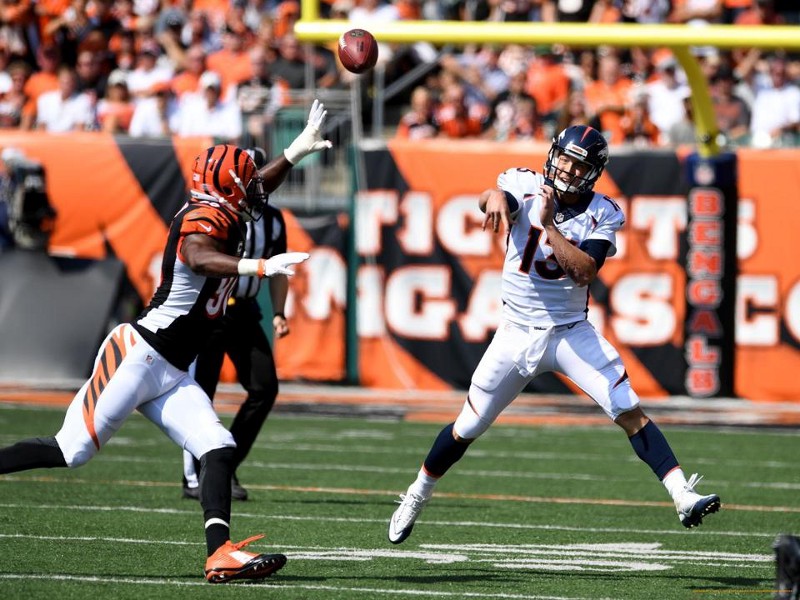 
Some big movers in this week’s power rankings, including the Atlanta Falcons and Philadelphia Eagles.

This team is 3–0 without Tom Brady. They just totally demolished the Texans on Thursday night with a rookie quarterback making his first start. Gronkowski hasn’t even made an impact yet. Some readers have questioned the Pats at #1: they probably won’t anymore.

The Vikings completely dominated after a slow start against the Panthers on Sunday. They handed the Panthers their first home loss since the 2014 season. The offense, led by Sam Bradford, has not made any mistakes and the defense is playing lights out. They are the early NFC favorites.

After the Vikings easily took care of the Panthers in Carolina, the Packers can feel a little better about losing a close game in Minnesota in Week 2. Aaron Rodgers threw four touchdowns in the first half in Week 3, as the Packers head into their early bye.

The Chiefs beat the Jets 24–3 and forced Ryan Fitzpatrick to throw six interceptions. After a subpar Week 2, the Chiefs appear to be right on track to make some noise in the AFC.

Trevor Seimian had the best game of his career so far in the Broncos 29–17 win over the Bengals. It’s a really good sign for the Broncos that despite the running game not working, Seimian played really well against a good defense to deliver the win.

The Ravens improved to 3–0 by getting a close win over the Jaguars in Week 3. Remember, this Ravens team had a ton of injuries last year and despite their 5–11 record, they didn’t lose any game by more than 8 points. Watch out for Baltimore.

It can’t be overstated how good the Falcons offense has looked so far this year. After a down year last year in his first year in a new offense, “Matty Ice” appears back in form. They do have a really tough stretch coming up, starting this week vs Carolina.

Woah. The Steelers suffered their worst loss in in nearly three decades against the Eagles. It just was not a good day for Pittsburgh, as they suffered injuries to both Ryan Shazier and Lawrence Timmons in the game. The bright side is that superstar running back Le’Veon Bell returns from his three-game suspension.

Almost no one thought the Cardinals would start the year 1–2. Carson Palmer threw four interceptions against the Bills in Week 3, eliminating any chance of a comeback. Obviously, Palmer will need to play better if the Cardinals are going to contend for a Super Bowl.

The Sehawks improved to 2–1 with their win over the 49ers. Russell Wilson looked like he suffered a serious injury, but it’s a knee sprain and it looks like Wilson will be playing in Week 4. Wilson is a pretty tough guy. Christine Michael will get a big workload with Thomas Rawls out a few weeks.

Brock Osweiler and the Texans had trouble getting anything going against the Patriots. Things can certainly change, and things can happen in a football game, but if they can’t even come close to beating the Patriots without Tom Brady, they better hope they don’t have to play them in January.

It’s a little concerning that the Panthers are off to this start. They struggled more than the score indicated against the talent-deficient 49ers, and lost to Denver on the opening night and at home to Minnesota without Adrian Peterson. Newton was sacked 8 times by the Vikings. They play the hot Falcons in Atlanta this week.

The Raiders dropped a spot because of teams like the Falcons and Ravens jumping up in the rankings. Oakland plays Baltimore this week in what should be a great game to watch with two AFC playoff contenders.

Philadelphia makes the biggest top 15 jump in our power rankings (seven spots). They played great against the Steelers, and head into their Week 4 bye. If they can keep it up, they may be a surprise contender in an NFC that is not looking too strong right now.

Jeremy Hill (2 TDs) and the Bengals were right with the Broncos, but Denver jumped ahead in the fourth quarter. The Bengals get the Dolphins this Thursday night. Dropping to 1–3 in a good AFC North division would not be great.

The Colts got their first win of the season, thanks in large part to a 63-yard catch and run by T.Y. Hilton in the fourth quarter. It was a much needed win by the Colts to avoid falling to 0–3. They’ll travel to London this week against the Jaguars.

Kirk Cousins looked a lot better this week against the Giants. He’ll look to continue his good play against the Browns in Week 4.

Dak Prescott, like fellow rookie QB Carson Wentz, has avoided mistakes thus far. Some people want to make a quarterback controversy out of this situation, but Romo likely will take over when he is 100% recovered from his back injury.

The Rams got their first touchdown of the year and put up 37 points against Tampa Bay. It’s early, but they’re first in the NFC West so far. They’ll get the sure-to-be angry Cardinals in Week 4, though.

Eli, Eli, Eli. He made some really bad decisions (as he does, at times), which may have cost the Giants on Sunday. Odell Beckham lost a battle with a kicking net while throwing a tantrum on the sideline. It was not a good week for the Giants. It won’t get easier against Minnesota on Monday Night Football.

Ryan Fitzpatrick thew six interceptions against the Chiefs in Week 3. They play Seattle this week, and Fitzy doesn’t start playing better quick, he’ll give Todd Bowles no choice but to put him on the bench in favor of Geno Smith.

The Chargers nearly got a win in Indianapolis, but instead drop to 1–2. The Saints are coming to town in Week 4 in what should be a shootout.

Blake Bortles has struggled so far this year, and the Jags are going to have a hard time winning if Bortles doesn’t play well. Allen Robinson had two touchdowns in Week 3, but it wasn’t enough against the Ravens. Now, the Jags will go to London and play 9:30 am EST this Sunday.

The Bucs had a chance at the end, after an hour-long weather delay. Jameis Winston questionably kind of just ran past the line of scrimmage instead of giving one of his receivers a chance at a jump ball on the last play of the game.

If any team on the lower third of this list can turn things around, it’s Sean Payton, Drew Brees, and the Saints. They’ll go to the West Coast to play the San Diego Chargers in Week 4, where they’ll look to turn things around.

The Niners seemed like they had no chance in Seattle on Sunday. It’s a good sign for the running game that Carlos Hyde had over 100 yards and two touchdowns against a stingy defense, even if a lot of it came late in the game.

The Lions almost made a second half comeback against the Packers, after falling behind 31–10. Marvin Jones had a huge game, with over 200 yards and two touchdowns. They will try to get back on the winning track this week against the struggling Bears.

Marcus Mariota seems to be forcing things. He had three turnovers in Week 3. DeMarco Murray has been a huge bright spot for the Titans, and if Mariota starts playing like he can, the Titans could win some games.

The Bills shocked the Cardinals with a 33–18 victory. LeSean McCoy led the way for the offense, with over 100 yards and two touchdowns. The defense picked off Carson Palmer four times.

The Dolphins struggled to beat the Browns, but got their first win of the year. Ryan Tannehill needs to play better, or Adam Gase might be looking for a new quarterback for next season.

The Bears suffered another injury, as starting running back Jeremy Langford is out 4–6 weeks with an ankle sprain. Rookie Jordan Howard will take over, likely as a three-down back. The Bears just don’t have enough to make any noise this year.

Unfortunately for Browns fans, their win did not come in Week 3 in what looked like a winnable game. Terrelle Pryor did it all for the Browns, which was fun. Another bright side is Josh Gordon returns for Week 5 against the Patriots (but so does Tom Brady).