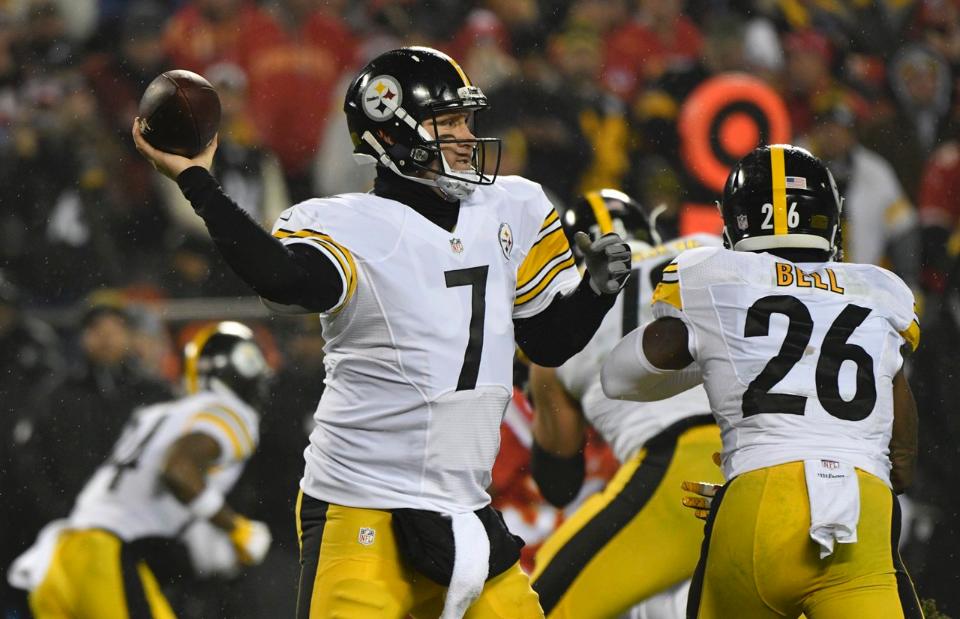 This could be the best Thursday Night Football game of the season, as two of the top teams in the NFC faceoff in a game that could have playoff implications, and they know it. Panthers linebacker Thomas Davis said, “this is a fight essentially [for] the number-one seed right now in the NFC,” and the 34-year-old admitted that the Eagles are playing really good football coming into the matchup. Carolina, too, is playing really good football after knocking off the Patriots in Foxborough and the Lions in Detroit. Now, they’ll look to stop a confident Carson Wentz. I give the Panthers the edge at home in what should be a game that goes down to the wire, especially since Philly won’t have right tackle Lane Johnson.

Mitchell Trubisky came out hot in his first career start on Monday night, but I think he was just really comfortable with the game script to open his career. After a couple drives, he started to become more inaccurate, though his athleticism and arm talent still showed against the Vikings. Plus, he probably has the worst group of wideouts in the league, so overall, it was a promising debut for Trubisky, and he kept them in the game until he was baited into a late interception. This week, he gets another difficult defense in the Ravens, whom are second in the league with nine interceptions. As long as they can stop Jordan Howard, Baltimore should have no problems against Trubisky in his first road start.

It took five games where he completed just 50.9% of his passes for 170.2 yards per game and a 3:9 touchdown-interception ratio, but the Browns finally benched rookie DeShone Kizer in favor of Kevin Hogan, and Hogan will make his first career start on Sunday. I’ll never understand why Hue Jackson decided to name Kizer the starting quarterback after he showed nothing in the preseason, and I still think Cody Kessler is the best option for Cleveland, but Hogan has played well enough in relief to get his shot.  He’ll face a Texans team that had unbelievable misfortune in Week 5 when they lost J.J. Watt and Whitney Mercilus for the season, but the play of Deshaun Watson gives them hope in 2017. I think Watson will have a huge day after the Browns passed on him twice in April’s draft.

Green Bay and Minnesota split their two meetings last year, with the home team winning both games. The Vikings’ win came in Sam Bradford’s first start with the team, and he played out of his mind, dropping dime after dime while taking hits on Sunday Night Football, causing then Minnesota guard Alex Boone to say this after the game:

But for as good as Bradford was in that 2016 game, it was just as tough to watch him in last week’s win over the Bears, as he was clearly unhealthy and uncomfortable due to his knee injury. Case Keenum has played really well off the bench, but I don’t see him beating Aaron Rodgers and the Packers.

Are the Lions real contenders this year, or will they be a borderline playoff team again? Detroit has been able to beat a so-far-disappointing Cardinals team, the still-winless Giants, and the Vikings without Sam Bradford, but they also lost at home to both the Falcons and Panthers. Their three-game stretch against the Saints, Steelers, and Packers will be telling, as Detroit could come out of it at 6-2 just as easily as they could find themselves at 3-5. I still think they have a lot to prove, and will need to rely on a balanced offensive approach against a somewhat-improved defense for New Orleans. Sean Payton and Drew Brees are 5-2 coming off a bye week this decade, and I think not having to worry about getting Adrian Peterson carries anymore could actually help them create more rhythm on offense. This should be fun, high-scoring game.

The Falcons are also coming off a bye week, and they have the second-best record in the NFL coming off a bye since Matt Ryan entered the league. The reigning NFL MVP hasn’t been great this year, but his weapons have been banged up, and I expect them to come out strong on Sunday with a more explosive offensive attack. That could mean getting Tevin Coleman more involved, as despite getting out-touched by Devonta Freeman 79-42, Coleman only has 21 fewer yards this season. For Miami, they need better blocking up front to open holes for Jay Ajayi and give Jay Cutler time to find his talented wide receivers. I think their offense will have a marked improvement this week, but not enough to beat the Falcons.

I don’t think anyone—not even the Jets themselves—would have predicted that this Week 6 matchup would be for first place in the AFC East, but here we are. New York is winning by taking care of the football and not breaking on defense, and head coach Todd Bowles deserves a lot of credit for turning a “tanking” team into an early-season winner. In recent years, the Jets have actually played the Patriots tough, as before their 2016 Christmas Eve meeting that the Pats won 41-3, the division rivals had seven-straight games decided by one-score, with New England only having a +9 point-differential in that span. Bill Belichick had a few extra days to prepare, though, and if the defense is straightened out, watch out.

Former Redskins offensive coordinator Kyle Shanahan will face his former team and quarterback this Sunday, and it’s an interesting meeting after there were rumors in the offseason that Kirk Cousins wanted to reunite with Shanahan in 2018. However, the new head coach has made some questionable decisions this season—the most recent being limited playing time for running back Carlos Hyde in an overtime loss to Indianapolis—and with way more talent than they had a year ago, San Francisco is still without a win. Would the “Boy King” owner Jed York fire yet another coach if the team doesn’t finish better than they did a year ago? Games against the Giants and Bears are the only games they might be favored for the rest of the season, and it’s impossible to know what the impatient owner is thinking. Even without elite cornerback Josh Norman, the Redskins have a really good and underrated defense. I like them at home.

Offensive-line issues plagued the Cardinals in Philadelphia last Sunday, but they are going to have a much easier time against Tampa Bay, as the Bucs have a measly four sacks through four games (worst in the league), and they are allowing 309 passing yards per game (second-worst in the league). Arizona should also get a boost in the running game after trading for Adrian Peterson, whom should at least open things up some for the playmakers on the outside. When these teams met last season, the Cardinals won 40-7 and forced Jameis Winston to throw four interceptions. The third-year quarterback has better weapons than he did in 2016, but he’s still making the typical Jameis mistakes. This could be a big win for the oldest team in the league as the look to keep pace with the Seahawks and Rams.

On the surface, this matchup will be strength versus strength, as the Rams have the league’s second-highest scoring offense (30.4 points per game) and the Jaguars have the league’s second-best scoring defense (16.8 points per game). However, Jacksonville is really struggling against the run, as they are allowing 5.4 yards per carry, which is easily the highest clip in the NFL. Sean McVay is going to feature Todd Gurley to try to exploit that, and it could lead to the safeties creeping up, potentially leading to a deep shot to the unsatisfied Sammy Watkins after he seemed to complain about his role on Twitter after last week’s loss (he did post a picture of him running alongside McVay at practice on Instagram yesterday, so that’s a positive). This should be a close game with two former SEC superstar backs in Gurley and Leonard Fournette being the focal points.

The Steelers have the Chiefs’ number more than any opponent since Andy Reid took over as head coach in 2013, as Pittsburgh is 3-1 against Kansas City, including last season’s postseason victory in Arrowhead. Also, the lone victory for the Chiefs came when Ben Roethlisberger was out with an injury in 2015, and the Steelers blew Big Red’s team out last October. All that said, I’m picking the Chiefs in this one. Alex Smith has always been underrated and underappreciated, but he’s taken his game to another level in 2017. At the same time, Roethlisberger has played poorly this year, with the low point coming in last Sunday’s loss where he tossed five interceptions and openly wondered if he’s still a good player. I think he will be a lot better this week, but I don’t see them turning things around dramatically enough to outscore the Chiefs.

I really thought the Chargers newest way to lose would be allowing Eli Manning to drive down for a game-winning score after losing basically all his receivers, but Los Angeles was able hold on last week against the Giants. This week, they’ll face the division-rival Raiders, and quarterback Derek Carr is expected to return after missing one week with a back injury. Hopefully the offensive line is able to keep him upright against the pass-rush duo of Melvin Ingram and Joey Bosa, as a setback for Carr is the last thing Oakland wants. Maybe Amari Cooper will finally break out of his slump, but it will be difficult if Casey Hayward is covering him for most of the day. If so, Michael Crabtree will have to continue to make plays. This should be a better game than the records indicate, and I like Los Angeles if they keep feeding Melvin Gordon and playing Hunter Henry.

This is… not a great game. Unfortunately, Sunday Night Football cannot be flexed yet, so we’re just going to have to live with it. If you want a reason to watch, it’s impressive rookie running back Wayne Gallman for the Giants, though he probably won’t even be able to reach the line of scrimmage on most of his rushing attempts, as the Broncos are shutting teams down every week. Besides that, I guess we’ll see how Trevor Siemian looks coming off the bye week, and I think we might see an exciting screen pass to Demaryius Thomas at some point. Also, Jamaal Charles has looked good this season, and maybe this will be one of Eli Manning’s final games with the Giants.

Another primetime game that could definitely be better here, but the Monday Night Football matchup looks like the Super Bowl compared to the SNF game, especially if Marcus Mariota (hamstring) plays. The Colts are staying afloat without Andrew Luck, and the AFC South will be really interesting down the stretch if the superstar quarterback can get healthy soon. Jacoby Brissett is playing admirably in his stead, and he’s helped T.Y. Hilton have a couple big games this season, so this would be huge if he can beat the divisional foe. We’ll have to see Mariota’s status, as my pick will depend on whether he’s active or not. Right now, it looks like he’ll play.