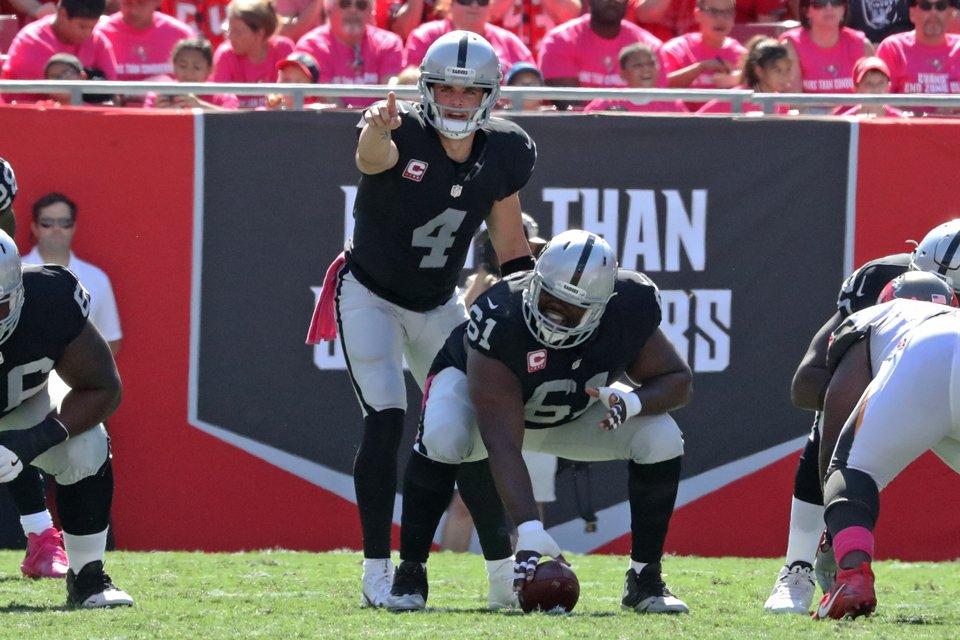 Hopefully a change of broadcasting crews (from CBS to NBC) will somehow change the on-field product for Thursday Night Football, because Week 2 though 8 were… not great. This game is big for Tampa Bay, as they could basically move to first place in NFC South with two victories over the Falcons; they’d be just half a game behind because of already having their bye week. Unfortunately for the Bucs, they don’t have enough firepower on either side of the ball to keep up with Matt Ryan. Both Amari Cooper and Michael Crabtree just torched Tampa for over 100 yards each, so Julio Jones is sure to improve on his 29-yard performance from last week. Playing with a 4th string running back, Mike Evans needs to have a huge night to get the win for the Bucs.

Minnesota’s offensive coordinator Norv Turner resigning this week was a shocking move, but it was apparently his decision after two straight 10-point games for the Vikings offense. Tight end coach Pat Shurmer will take over for Turner, and it’s probably a good thing for Sam Bradford (with Shurmer being Bradford’s OC in St. Louis and Philadelphia) because he should know what the quarterback likes and doesn’t like. Defensively, the Vikings didn’t seem ready to play last week, but losing how they did should have them ready at home. Matthew Stafford is going to have to play better than he did against the Texans on Sunday to get a win in Minnesota.

Because of their immense hate for Chip Kelly, many Eagles fans have probably chosen to forget how much Philly dominated the Giants with the former head coach in charge. The only loss in Kelly’s three years was with Matt Barkley starting for the Eagles, and even that was a 15-7 game. The highlight of the three years was a 27-0 shutout victory in Philadelphia on SNF which became known as “Black Sunday.” After a 3-0 start to the year, the Eagles are trending badly in the wrong direction, and new head coach Doug Pederson is a big reason why after the team blew a 10-point lead to Dallas last week. Eli Manning should have the offense back on track coming off the bye, but it’s always hard to predict with Eli. This game is big for both teams hoping to keep up with the Cowboys.

Led by two straight 200-yard games by running back Jay Ajayi, the Dolphins were surging heading into the bye week; the Jets had to come from behind last week against the winless Browns. These teams never had a hope at winning the division with the Patriots as good as ever, and they’ll need a win this week to keep up in the wild card race. Brandon Marshall talked some trash this week, saying he “doesn’t like” Byron Maxwell, even though he doesn’t know him, so that’s a matchup to keep an eye on. On the other side of the ball, Darrelle Revis could follow Jarvis Landry into the slot, leaving DeVante Parker with some very favorable coverage on the outside—and the Jets have been susceptible to the long ball this season.

Quarterback Nick Foles filled in for Alex Smith last week and played well, throwing for a couple touchdowns. With Smith (concussion protocol) out this week, Foles gets a shot to start against the Jaguars, as does Charcandrick West with Spencer Ware (concussion) also likely to sit and Jamaal Charles (knee) on IR. Jacksonville still probably doesn’t have a chance in Kansas City. Blake Bortles looks broken, and the team looked like they didn’t even care in last Thursday night’s loss. Perhaps a new offensive coordinator will commit to the running game, but picking the Jags has hurt me too many times this season.

After last week’s win overtime win over the Eagles, Dallas suddenly sits at the top of the NFC through the season’s midway point. With just 1 loss and the calendar turning to November, it doesn’t look like a Cowboys collapse is in the future with Dak Prescott leading them. However, coming off a big divisional win on Sunday Night Football, this week is a prime spot to be sleeping on an 0-8 team. If somehow Cleveland can get a win, the situation in Dallas would suddenly be tricky with Tony Romo getting healthy. The Browns offense will certainly be better with rookie wide receiver Corey Coleman back in the lineup, and the Dallas defense is injured, but Ezekiel Elliott will probably be too much for them to pull the upset.

Football fans usually live for these Steelers and Ravens matchups, but it seems like people aren’t talking about it so much this week; perhaps it is because the teams combine for a .500 record so far this season. Still, 1st place in the AFC North is on the line, so the teams will be ready to play in what should be a competitive game. Ben Roethlisberger (knee) continues to prove he’s an X-men or something, as he will be back after having knee surgery just a short while ago. That should tell you how important this game is for both teams, especially if they want to keep pace with the Patriots and the AFC West teams for playoff seeding. I expect a close game, but the Steelers are simply more talented than the Ravens.

The Saints have won two games in a row to move within a win from the lead in the NFC South, while the 49ers are coming off a bye after losing six in a row. New Orleans’ defense remains a huge issue for them, but Colin Kaepernick isn’t good enough to take advantage of it and outscore Drew Brees. The Niners are getting creamed on the ground since NaVorro Bowman’s achilles injury, so it doesn’t matter if the benched Mark Ingram sees carries or not; they should run all over San Francisco.

Could another playoff run after a bad start be in the cards for the Panthers? I don’t think so with the Falcons looking for real this season. Cam Newton isn’t dominating like he did last season when he was the NFL MVP, but at least the running game got going in last week’s in over the Cardinals. The often over-the-line Rams defense will probably get some personal fouls called on them this week after Newton and head coach Ron Rivera both complained about defenders getting away with hits on Cam that they don’t against other quarterbacks. Case Keenum probably needs to play well this week to keep #1 overall pick Jared Goff on the sidelines, especially with a favorable schedule after this week for Goff to start on a high note.

Aaron Rodgers has aired it out the past two weeks (7 touchdowns, 0 interceptions) after the Packers offense was getting criticized for a slow start. They fell to the Falcons last Sunday, but Rodgers did his job with 4 touchdown passes and 60 yards on the ground. With James Starks still out, Green Bay is still without a true running back that will see more than a handful of carries. Fortunately for them, they probably don’t need one against the Colts, who are likely to be without Vontae Davis (concussion). Indianapolis still cannot block for Andrew Luck, and the Packers elite run defense should have no problem containing Frank Gore. Even if Ty Montgomery and Randall Cobb don’t return for the Packers, Aaron Rodgers will still have Jordy Nelson and Davante Adams to throw to.

Tennessee is coming off a 10-day rest after dominating the Jaguars on Thursday Night Football last week. They continue to pound teams with DeMarco Murray, but the former Cowboy and Eagle hurt his toe last week. He’s going to play in Week 9, but expect the Titans to get promising rookie Derrick Henry involved in the second half of the season. Philip Rivers and the Chargers lost a competitive game with the Broncos on Sunday and will try to keep pace in the AFC with a victory this weekend. Melvin Gordon played his best game of the season last week, and should extend his league-leading touchdown total against Tennessee.

Last week’s Eagles and Cowboys game was the best Sunday night game so far this season, but this one probably tops it. The AFC West rivals sit tied atop the division, with each having a 6-2 record. Derek Carr’s MVP case would get a whole lot better with a prime time victory over the defending Super Bowl champions, but like San Diego has done against Denver, the Raiders should try to attack on the ground. Latavius Murray needs to pickup tough yardage like Gordon has in his two games versus the Broncos. Gary Kubiak has voiced displeasure in quarterback Trevor Siemian, but the offense is in a good spot this week with Oakland bottom-five against the pass and run. I still like the Raiders.

Seattle’s offensive line is a huge issue for them, which could present problems against a good Bills defense. Russell Wilson hasn’t thrown a touchdown pass in three straight games, even with the Seahawks not committing to the running game. At home, I think they’ll figure things out. Even if LeSean McCoy (hamstring) is active, he will be facing a determined defense after they just allowed Tim Hightower (yes, Tim Hightower) run for 100 yards in the Saints’ win last week. The Bills just don’t have the weapons outside to truly challenge the Seahawks this Monday night.