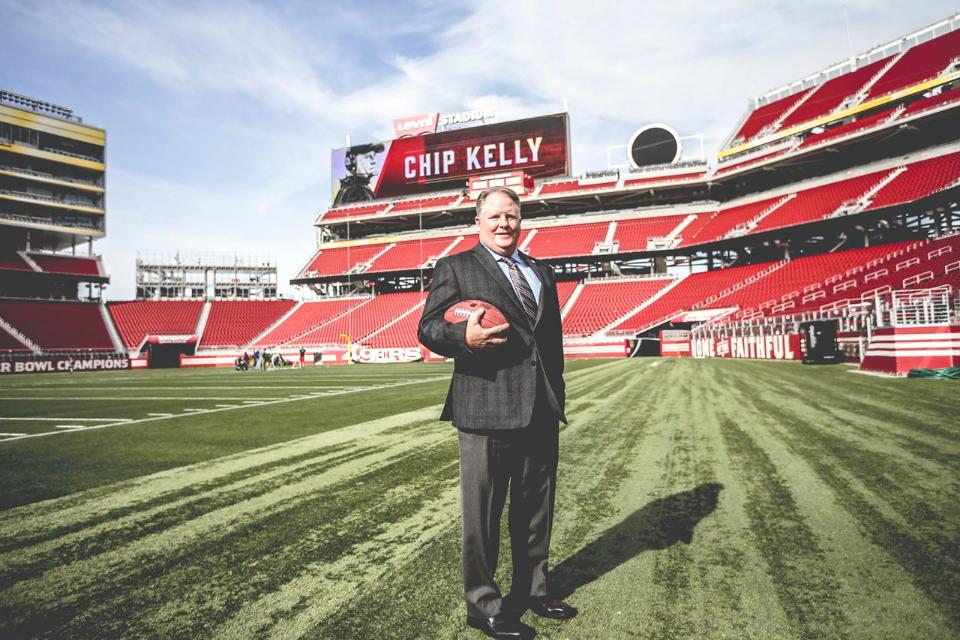 What’s Next for Chip Kelly?


Chip Kelly was just fired as head coach of the San Francisco 49ers. It was his second time getting fired in just over a calendar year, but he didn’t really have a chance working with one of the worst rosters in the league. That roster, of course, was constructed by general manager Trent Baalke, and there are now reports that the also-fired Baalke passed on Dak Prescott in last year’s draft despite Kelly and others wanting the Mississippi State quarterback.

According to @MikeGarafolo, Chip Kelly and others in the 49ers building wanted Dak Prescott in the draft but Baalke didn't draft him. Wow.

Remember, Baalke was the one that pushed the great Jim Harbaugh out of town. Kelly was able to win two games this season despite being favored in none of them, and he kept the locker room together through the Colin Kaepnerick drama. Many of the players loved Kelly and were sad to see him go. So what’s for the former Eagles and 49ers head coach?

Bill Belichick has not been shy about his respect for Chip Kelly, going as far as calling him a “great coach” after he was fired by the Eagles. Josh McDaniels looks like he will make his second attempt as a head coach this offseason, which leaves a vacancy at offensive coordinator in New England. McDaniels came on as an assistant for the Pats earlier this decade after he was fired, and he replaced Bill O’Brien as OC when O’Brien left for Penn State that offseason. I can see the same thing happening for Kelly. Those that think Brady could not run Chip’s system or vice-versa do not know enough about what Kelly’s offense is about; his offense relies on the quarterback getting the ball out accurately and on-time to the guys Kelly schemes open. Who fits better than Tom Brady?

I honestly think this is the least likely of scenarios for Kelly. He proved he could win at the college level, and going back to college isn’t the way to get a head coaching job in the NFL (is Lovie Smith on any candidate lists this offseason?). Yes, Pete Carroll did it, but it took him about a decade of winning at USC before he got his chance with Seattle. There are several coaches on the hot seat, including Texas A&M, Tennessee, and potentially Auburn—and some programs would throw gobs of money at Kelly—but Chip wants to be an NFL head coach.

Jets head coach Todd Bowles was a candidate for the Eagles defensive coordinator job when Kelly was hired (Kelly wanted him), but Bowles decided to go to Arizona to be DC because he wanted the head coaching job at Philly, and he also played under Bruce Arians at Temple. With Bowles now as the head coach of the Jets, and a vacancy at offensive coordinator with Chan Gailey moving to a different role, Kelly could finally get a chance to work with Bowles.

Los Angeles COO Kevin Demoff and owner Stan Kroenke are said to want to make a “splash” hire, and who would qualify as that other than Jon Gruden or Jim Harbaugh? Chip Kelly. If he is able to secure an interview with the Rams, Kelly should be able to sell them on his offense and being able to make Jared Goff successful. Anyone that just puts on the tape could see that Kelly is arguably the best in the league at scheming guys open. All head coaching vacancies should give Kelly at least an interview; could you imagine his fast-paced attack in the Denver altitude?

Would Chip Kelly pull a Sam Hinkie? Sitting out for a year and hopefully getting a head coaching job in 2018 could be the plan for Kelly.